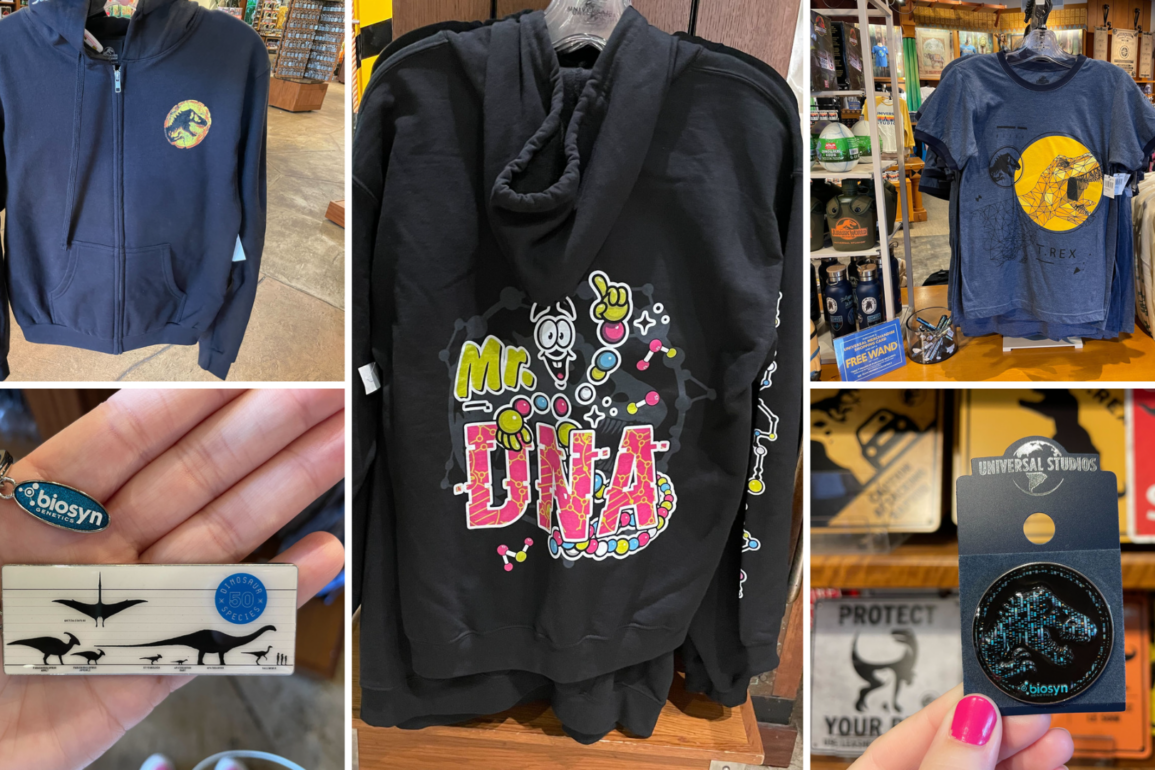 Even more “Jurassic World” merchandise has arrived at Universal Orlando Resort. We found most of these items at Jurassic Outfitters in Universal’s Islands of Adventure.

This black zip-up hoodie has the “Jurassic World” T. rex logo on the left breast.

The T. rex skull is black, surrounded by orange amber.

“Universal Studios” is printed in yellow on one sleeve.

A “Jurassic World” poster featuring a T. rex and a helicopter is on the back.

This hoodie is also black and zips up.

The “Jurassic World” logo on the breast has colorful DNA dots around the edge of it.

Stripes of DNA run down the sleeves.

Mr. DNA himself is pictured on the back with his name.

The “Jurassic World” logo is in the background behind Mr. DNA.

This hoodie was in Islands of Adventure Trading Company.

This tee is heather blue.

It features a T. rex made out of geometric shapes, its face roaring across a yellow circle.

The “Jurassic World” logo is small and to the side.

The Biosyn Genetics logo is on one sleeve.

This keychain also features the Biosyn Genetics logo on a charm.

The Biosyn charm is blue with white lettering.

The larger charm features some dinosaur species on a chart with humans to show how big they are.

This pin is the “Jurassic World” T. rex logo made out of blue-green pixels, with the Biosyn logo beneath.

Previous
REVIEW: We Tried The Entire New Menu at Tony’s Town Square Restaurant in Magic Kingdom and It Wasn’t Awful

Next
REVIEW: ‘Dumbo’ Cupcake Makes for a Cute But Mediocre Mother’s Day Treat From BoardWalk Bakery in Disney’s BoardWalk