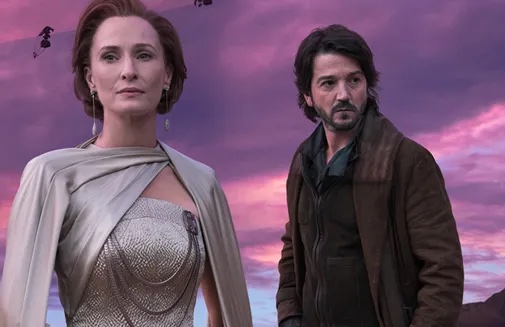 The cover story of the June 2022 issue of Vanity Fair is all about the “Star Wars” shows of Disney+, including “Andor” starring Diego Luna reprising his role of Cassian Andor in “Rogue One.”

A premiere date has not been announced for “Andor,” but the prequel series has already been renewed for a second season. According to Vanity Fair, it will premiere in late summer of this year.

Diego Luna spoke to Vanity Fair about keeping secrets about the series, describing the moment in 2019 when he first heard plot details from creator Tony Gilroy over the phone, using code words in the back of a car in Mexico City. Thankfully, he doesn’t have to keep everything a secret now.

According to Luna, “Andor” is the “journey of a migrant.”

“That feeling of having to move is behind this story, very profoundly and very strong,” he said. “That shapes you as a person. It defines you in many ways, and what you are willing to do.”

The story of “Andor” will begin with the destruction of Cassian’s birth world, then “follows him into adulthood, when he realizes he can’t run forever.” The series will take place five years before the events of “Rogue One” (which ends with the deaths of all the main characters, including Andor), but this description implies it may start with a flashback to Andor as a child.

“This guy gave his life for the galaxy, right?” Gilroy said of the character. “I mean, he consciously, soberly, without vanity or recognition, sacrificed himself. Who does that? That’s what this first season is about. It’s about him being really revolution-averse, and cynical, and lost, and kind of a mess.”

“His adopted home will become the base of our whole first season, and we watch that place become radicalized,” Gilroy went on. “Then we see another planet that’s completely taken apart in a colonial kind of way. The Empire is expanding rapidly. They’re wiping out anybody who’s in their way.”

Parallel to the story of Cassian will be the story of Mon Mothma. Mothma first appeared in “Return of the Jedi,” played by Caroline Blakiston. Genevieve O’Reilly later played a younger version of the character in “Revenge of the Sith,” but her scenes were mostly cut. She got to reprise the role in “Rogue One” and will now get her a moment in the sun during “Andor.”

Gilroy said, “It is a huge, orchestral, Dickensian ensemble cast.”

In addition to Luna and O’Reilly, the series will see the return of Forest Whitaker as Saw Gerrera. Stellan Skarsgård, Adria Arjona, Fiona Shaw, Denise Gough, Kyle Soller, Robert Emms, and David Hayman have all been cast in undisclosed roles.

Are you excited for “Andor”? Let us know in the comments.