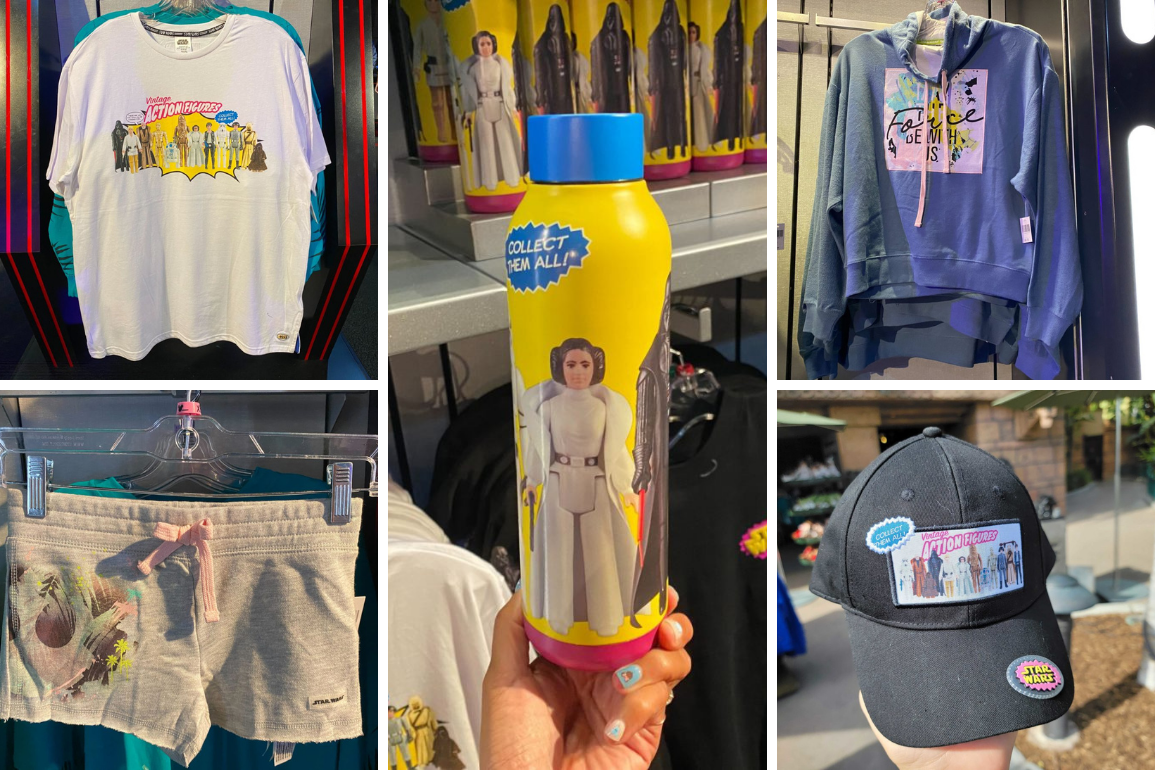 Even more “Star Wars” merchandise arrived at Disneyland Resort this week. We found most of this in the Star Wars Launch Bay.

The merchandise features images of vintage “Star Wars” action figures. This pullover hoodie is blue, with Darth Vader and Stormtrooper action figures on the front.

They are set against a background of pink dots. Darth Vader’s figure is saying, “It is useless to resist…”

This bottle features figures of Darth Vader, Luke, Leia, and a Stormtrooper.

The bottle is yellow, with a pink bottom, and a blue cap.

It reads “Collect them all!”

This loose-fitting shirt is white with a yellow blast on the front.

A row of action figures is atop the yellow background, facing forward. The Obi-Wan Kenobi figure is saying, “These are not the toys you’re looking for…” Above them, “Vintage Action Figures” is in pink lettering.

The figures are again pictured on the back, mostly facing to the side.

Darth Vader’s figure is saying, “I am your father!!!”

A yellow retro order form is pictured at the bottom of the tee.

This black ball cap has a similar picture of the line of action figures on a front patch.

“Collect them all!” is embroidered on the corner. A “Star Wars” patch is on the brim.

The “Star Wars 45” logo is on the back with old concept art of Luke Skywalker.

The “Star Wars” logo is inside the cap too.

This youth tee is pink and features Leia and R2-D2 action figures.

Leia is saying, “Not your ordinary princess.” R2 is saying “Beep! Boop!”

This shirt is teal green with R2-D2 and C-3PO figures on the front.

It is made to look like an ad for R2’s Repair Shop & Information Retrieval.

The “Star Wars” logo is in the bottom corner.

This final line of merchandise features geometric shapes and sketch-like images of “Star Wars” characters. This youth sweatshirt is white with stripes and shapes in black, blue, and green.

There are black elbow patches.

This tank top is white and features the same pattern as the sweatshirt above in a square on the front.

This black tee has a green stripe across the chest and a Stormtrooper helmet set against blue designs.

“Move along” is on the underside of the brim.

“Strength & Hope,” with the “o” replaced by the Rebellion logo is set against the hair.

These grey shorts have a pink drawstring at the waist.

The Rebellion logo is silhouetted on the side with images of x-wings and palm trees.

There are pockets on the back.

This white tee has minimalist images of Leia, R2-D2, Yoda, a Stormtrooper, the “Star Wars” logo, and the Rebellion logo in colorful squares.

This blue sweatshirt has a cowl neck with a pink drawstring.

A square on the front reads “May the Force be with us” against colorful splotches like graffiti.

These shorts match the above sweatshirt, with the same square “May the Force be with us” design on one leg.

The shorts are blue with a pink drawstring.

There are pockets on the front and back.

This shirt has a white torso with black stripes on the shoulders.

The sleeves are teal blue.

Minimalist images of Boba Fett are in squares on the front.

This black sweatshirt has white stripes along one sleeve.

The “Star Wars” logo with the Roman numerals of each episode is on the left breast. The hood drawstring reads “A long time ago in a galaxy far, far away…”

These shorts match the above hoodie. They’re black with a teal blue drawstring.

The “Star Wars” logo is repeated and overlapped down one leg.

This tank is heather grey, with “Strength & Hope” on the chest.

The graffiti-like image of the Rebellion logo is on the side.

The “Star Wars” logo is on the back.

This blue sweatshirt has a geometric design featuring Darth Vader, Yoda, and R2-D2 in a square on the chest.

A green zipper is on one sleeve.

It has black elbow patches.

These shorts are heather grey with a black drawstring.

“A long time ago in a galaxy far, far away…” is printed in blue lettering on the drawstring.

The “Star Wars” logo is in a subtle silver on one leg.

This tee is white with a graph of black lines.

There are green accents.

The bottom of the shirt is black and has a blue elastic drawstring.