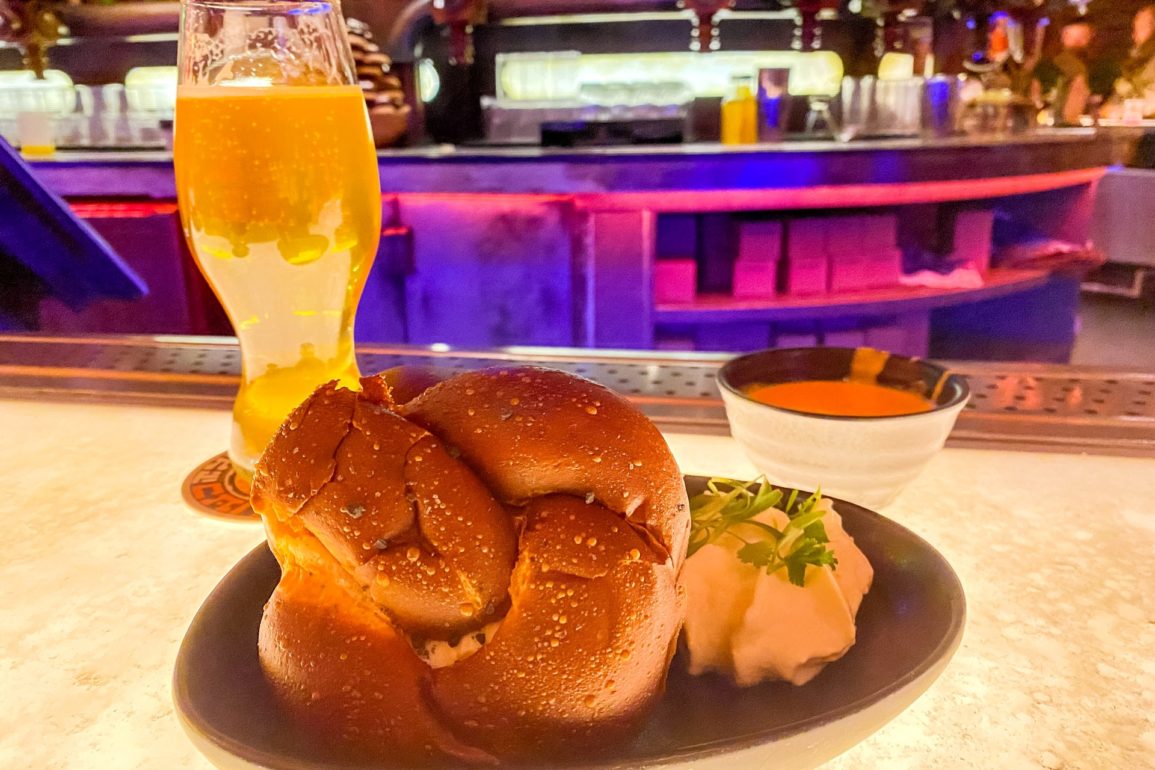 REVIEW: Oga’s Cantina Celebrates May the 4th With New Drinks and Delicious Five-Blossom Bread at Disneyland

May the 4th is Black Spire Day at Star Wars: Galaxy’s Edge, and in celebration, Oga’s Cantina at Disneyland has debuted two new drinks and new five-blossom bread.

Five-blossom bread was first introduced in “The Clone Wars” series as a confection from Naboo. A recipe from Strono Tuggs was included in the “Star Wars: Galaxy’s Edge: The Official Black Spire Outpost Cookbook,” but this is its first appearance in the park.

This was delicious! The warm, soft pretzel bread sprinkled with black sea salt paired nicely with the Calabrian cheese sauce. The sauce has an undertone of red peppers to give it a bit of a kick. The honey mustard cream foam is sweet and fluffy and complements the pretzel bread perfectly.

Golden Lager with a touch of Honey (Delahunt Brewing) (ABV 4.8%)

Black Squadron Lager is likely named after the Resistance X-wing squadron led by Poe Dameron (though it is worth noting that there was a Black Squadron in the Rebel Alliance and an Imperial Black Squadron composed of TIE fighters).

This is a crisp and refreshing lager. It’s very light. The honey is extremely subtle; it doesn’t add sweetness to the drink but is more noticeable after a few sips—a great beer for a hot day.

Sesid is an aquatic planet in the Star Wars universe known for tourism. It has not been featured in any on-screen media but has been in a few books.

Immediately there is a pleasant pineapple aroma. Taste-wise, the seltzer is very light in flavor. It is more like sparkling water with a hint of orange, which is the dominant flavor here.

Which will you order at Oga’s Cantina? Let us know in the comments.