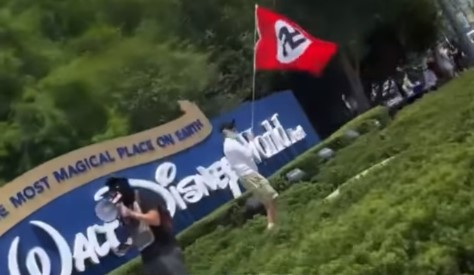 Nazis gathered outside an entrance to Walt Disney World yesterday, flying swastika flags and yelling at guests through a megaphone.

Stop Antisemitism, an organization dedicated to advocating against Antisemitism in the United States, posted a video on Instagram of the Nazis. At least two of the people were holding the Nazi flag.

The swastika flag is the symbol of the Nazi party, most famously associated with Adolf Hitler and the mass genocide of Jewish, Romani, LGBT, and disabled Europeans during the Holocaust. Though the reason the Nazis gathered outside Walt Disney World is unknown, the United States is one of a handful of major countries that allows for the Nazi flag to be flown. However, Walt Disney World is private property, and reserves the right to remove anyone at will.

MSN also reported that the Nazis were outside Walt Disney World on the night of Saturday, May 7, as well.