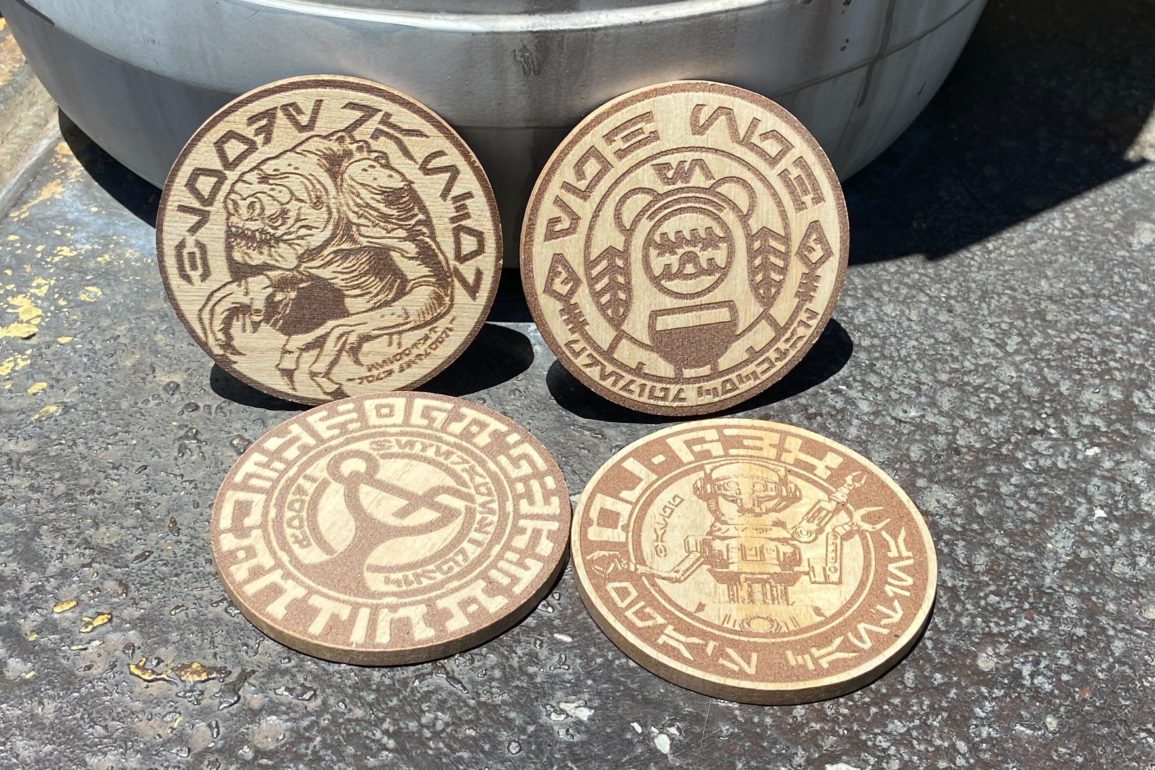 Paper coasters taken home from Oga’s Cantina will break down after a while. But wood coasters can last through all of your beverage adventures. These new engraved wood coasters feature the designs from the much sought-after coasters used in the bar, but in a more resilient medium. We found them at Jewels of Bith in Star Wars: Galaxy’s Edge in Disneyland.

These four coasters are engraved and burned wood, in four different designs.

The rancor coaster says “Bloody Rancor” along the top in Aurebesh characters, named for the cocktail at Oga’s. The writing at the bottom is difficult to make out, due to the tiny print and the loss of fidelity in the engraving process, but it is the same message as found on the paper coaster — “Imported from Tatooine,” in Aurebesh characters.

The DJ-R3X coaster is the only design that is not available in Oga’s Cantina as a paper coaster. It is exclusive to this coaster set. Along the top it says “DJ-R3X” in a stylized font, similar to the font from the below coaster. The bottom reads “Oga’s Cantina” in Aurebesh characters.

This coaster features the art from the backside of all the paper coasters at Oga’s Cantina, now starring in its own item. Without the color differentiation that is seen in the paper version, it is harder to read the stylized font. On the outer circle, it says “Oga’s Cantina” in that stylized font. The inner circle reads “Beverages, Music, Food” in Aurebesh characters.

The backs of all the coasters are plain wood, with the land logo and various copyright information.

The coasters are roughly 1/4 inch thick, definitely more sturdy than their paper counterparts.

Are you going to add these engraved coasters inspired by Oga’s Cantina to your collection? Let us know in the comments below.