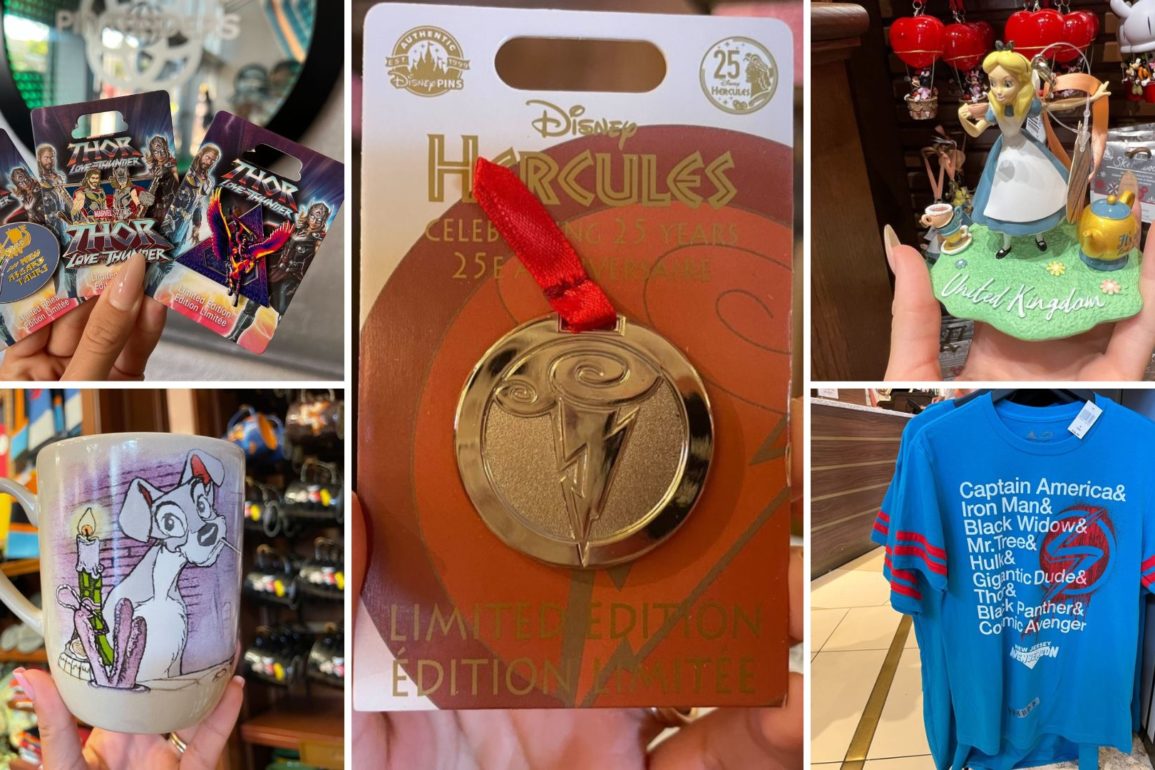 This double-sided flip calendar lets you count down to your next Disney vacation or just track the date. The number cards hang from gold rings on a metal frame. A Mickey silhouette sits next to the frame, on a wood base.

One side shows numbers and months.

The other side shows numbers and “Days until” options. One card reads “Days until school’s out.”

Another reads “Days until Disney vacation.”

You can also write in what you are counting down to.

This collapsible travel bowl is perfect for your pets on the go.

It is yellow and shaped like Mickey. A carabiner clip is attached to one ear.

His face is the section that collapses to create a bowl.

Add some pride to your phone case with this rainbow Mickey PopGrip.

It features Mickey’s face made of an ombre rainbow and covered in sparkles.

This was also in the Emporium.

This stoneware mug features Tramp on one side and Lady on the other, with a string of spaghetti connecting them.

The mug has a watercolor-like background of the alleyway featured in the movie.

The inside of the mug and the handle are off-white. It reads “you had me at spaghetti” in purple cursive inside.

This mug was also in the Emporium.

This ornament matches the U.K. Pavilion’s “Alice in Wonderland” merch.

Alice stands on a green grassy base.

“United Kingdom” and flowers are on the base.

A large golden teapot is next to Alice. “It’s always tea time!” is printed on the side of the pot.

Teacups are stacked on the other side of her and she drinks from a teacup.

This was in Ye Olde Christmas Shoppe at Magic Kingdom.

This yellow orange tank reads “Disney” four times down the side.

The letters are red and blue. “Magic” is printed at the bottom.

We found this in Star Traders at Magic Kingdom.

It is a heather white and zips up a few inches at the top.

A black and golden Disney Vacation Club patch is on the left breast.

We found this Kashwére blanket at Disney’s Riviera Resort.

It’s white with blue stripes at the ends.

This white shirt by Tommy Bahama was also at Riviera Resort.

The Riviera Resort logo is printed on the back.

Take home your own baby Moana with this plush.

Moana has a pink flower in her hair and an embroidered shell necklace.

She comes swaddled in a red blanket printed with black lines and the swirl from the heart of Te Fiti.

The blanket stays in place with velcro.

It can be removed to reveal Moana’s white top and tan skirt.

This outfit from Fashion Collection $6 includes a romper and headband.

They are both light pink and patterned with tropical green flowers.

This outfit includes a tie-dye bucket hat and hoodie.

The pants are solid purple.

Whether you’re sitting outside to watch a parade or just hanging out in your yard at home, this outdoor pillow might be perfect for you.

It’s blue and patterned with white images of Stitch surfing and hanging out at the beach. There are also white fish and teal blue waves.

It has a brown handle on the side for easy carrying.

This and the Apple Watch band below were in Creations Shop at EPCOT.

Like the pillow, Stitch is doing beach activities, surrounded by tropical flowers.

You can cuddle up with Princess Jasmine’s loyal tiger, Rajah, with this new baby plush.

Rajah comes swaddled in a pink-purple blanket patterned with clouds, flowers, and images of Abu and the Genie’s lamp.

Rajah was in Creations Shop.

This set includes a lime green raincoat and matching boots.

It was in World of Disney at Disney Springs.

This blue tee has red stripes on the sleeves.

It’s branded with the Ms. Marvel logo in a shiny red graffiti style on the front. It lists several Marvel superheroes, but some of them don’t quite have the right name:

A logo at the bottom is for New Jersey Avengercon.

This was in Keystone Clothiers at Disney’s Hollywood Studios.

The romper is pink but reads “make it green” on the front. Fauna the fairy wears green, but she doesn’t participate in the “make it pink, make it blue” fight in the movie.

The letters of “make” are white and blue, while the rest of the letters are green. Fauna is pictured in green outline next to the words. The spinning wheel, Merryweather, birds, and flowers are to the sides.

A drawstring is at the waist of the romper. More flower and bird designs are on the legs.

We found this in The Majestic at Disney’s Hollywood Studios.

Over at Disney Springs, we found this new phone case in Marketplace Co-Op.

It has a 3-D effect of Cinderella Castle against a blue background. The castle is pictured in white outline and the background is patterned with subtle retro Walt Disney World logos.

This pin features Minnie wearing a sun hat with a purple and white dress. She’s carrying a basket of lavender.

This was in Disney Pin Traders at Disney Springs.

This jumbo pin features Hades, Pain, and Panic looking down at an image of Hercules astride Pegasus.

It comes in a box with a Grecian pattern around the plastic window.

The limited edition size is 2,000. This and the next two “Hercules” pins were in Pin Traders at EPCOT.

Megara and Hercules look lovingly at each other on this pin, with Phil and Pegasus behind them.

Herc’s medallion with a lightning bolt coming out of a cloud is at the bottom.

One of these mystery boxes contains two out of ten possible pins.

Each pin features a different scene from the film on a vase.

This pin resembles Hercules’ golden medallion on a red ribbon.

It is a limited edition size of 4,000 and we found it in Frontier Trading Post at Magic Kingdom.

The latest Princess Tea Party pin is inspired by Ariel from “The Little Mermaid.

The teapot and cup are both patterned with green scales. The spout and cup handle are blue seahorses. The top of the pot is purple with orange sea stars.

This has a limited edition size of 4,000 and was in Pin Traders at EPCOT.

The C-3PO pin has dangling arms and legs.

Next, these three “Thor: Love and Thunder” pins were at Pin Traders.

This one features Valkyrie riding her winged horse and brandishing a sword. A triangle with Nordic designs on it is behind her.

She, the horse, and the triangle are printed in shades of red, yellow, and purple. It has a limited edition size of 4,000.

This pin features Thor and Mighty Thor a.k.a. Jane Foster.

The “Thor: Love and Thunder” logo is below them.

A Norse ship followed by a rainbow is on this pin, which advertises “New Asgard Tours.”

The piece at the top corner features the hammer Mjölnir and reads “Tour Guide of the Month.”

Finally, we found this pin set at Frontier Trading Post.

The bottom pin features Jane as Thor and reads “Mighty.”