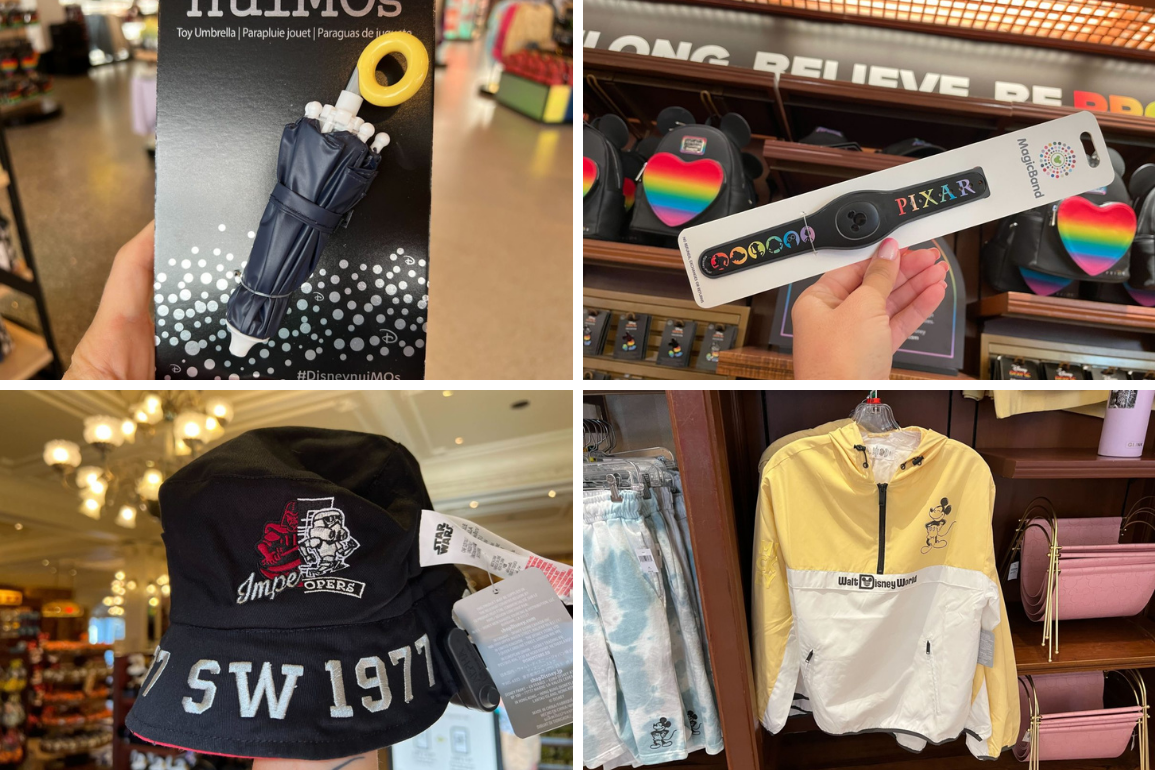 Welcome to the merchandise roundup for May 26, 2022! Each new day brings new merchandise to Walt Disney World, and we know you don’t want to miss a thing, so we gather new releases here. This week, we visited Magic Kingdom, EPCOT, Disney’s Animal Kingdom, Disney’s Hollywood Studios, and more; let’s look at our discoveries.

These youth leggings are blue with gold Mickey heads to match the colors of the 50th anniversary celebration.

The Walt Disney World logo is in EARidescent gold on the waistband.

We found these in the Emporium at Magic Kingdom.

The top half of this windbreaker is yellow, while the bottom is white.

A sketch-style Mickey Mouse is on the left breast while the Walt Disney World logo is across the middle. The black zipper goes down about halfway until it meets the logo.

Two zippered pockets are on the front.

Mickey’s name is spelled out on the right sleeve. We found this in the Emporium at Magic Kingdom.

Kids can dress up as Ms. Marvel for bedtime with these new costume pajamas.

The red and blue long-sleeve top is meant to emulate Ms. Marvel’s super hero costume, complete with the blazing star across the chest.

Her symbol is on the left sleeve.

Sketches of a fist and a cat are beside the pocket, which has an embroidered “sloth baby” patch.

The pants are red and patterned with many of Kamala Khan’s sketches and her signature.

We spied this super set of pajamas in Disney Traders at EPCOT.

Get ready for the 4th of July with a new Americana t-shirt featuring Mickey Mouse. Mickey sports the patterns of the flag of the United States of America with the Walt Disney World logo beneath him.

You can pick up this patriotic shirt in World of Disney at Disney Springs.

This gray sweatshirt features the many faces of the famous icon, Mickey Mouse.

All four have the Walt Disney World logo on the hood.

We found these all at Sunset Club Couture at Disney’s Hollywood Studios.

The Minnie version is white.

This was in Sunset Club Couture at Disney’s Hollywood Studios.

We found this in Sunset Club Couture at Disney’s Hollywood Studios.

The Stitch hoodie is light blue, with his mischievous mug plastered across it.

Like the others, we found this in Sunset Club Couture at Disney’s Hollywood Studios.

Ms. Marvel stars on a white fitted tee with blue and red embellishments.

It has a sketch-style rendition of the heroine.

We found this in Keystone Clothiers at Disney’s Hollywood Studios.

Featuring Héctor and Miguel from “Coco,” this olive green hooded sweatshirt highlights the hit song from the movie. “Remember Me” is patterned behind the characters, while “Recuerdame” (the Spanish translation) is front and center.

This was found in The Majestic at Disney’s Hollywood Studios.

We also found a white t-shirt that reads, “Disney Magic” with a castle in place of the “a.”

The lettering is intentionally cracked and aged.

This was also in the Majestic at Disney’s Hollywood Studios.

Pocahontas’ silhouette is in khaki against a tan background on this crop top.

The pocket reads, “Listen with your heart.”

This is part of the “In A Land Far Away” Princess Collection.

It was in the Majestic at Disney’s Hollywood Studios.

If pastels are more your style, check out this white tee that reads, “Totally Mickey Mouse.” The collar is pink, while the left sleeve is ringed in green and the right in blue.

A blue Mickey icon is on the left sleeve.

And a pink one on the right.

We found this in the Majestic at Disney’s Hollywood Studios.

Kids can rep Mickey Mouse with this denim jacket featuring design sketches for the iconic character.

His name is embroidered in red on the front beside a stamped-looking image of his face.

The various sketches are labeled with notes and directions, as if from the concept guides for drawing Mickey.

The sleeves have buttons at the cuff.

More sketches are on the center panel of the back.

“Original” is embroidered in red above them.

We spotted this in Island Mercantile at Disney’s Animal Kingdom.

This shirt starts with blue denim at the waist and washes out to pale blue at the thigh. The entire skirt is printed with white Minnie Mouse heads.

The back has Minnie Mouse’s signature bleached into the dark denim pocket. Also, her image is sketched onto the left side.

This item was found at Island Mercantile at Disney’s Animal Kingdom.

The Stitch hair ribbon is a stretchable hair scrunchie with two long tails of ribbon attached.

The print feature floral designs and the various faces of Stitch from “Lilo and Stitch.”

The ribbon is tied directly onto the scrunchie. The Stitch hair ribbon was found at the Emporium at Magic Kingdom.

The Dreamer Bucket Hat is a soft lavender, pink. The word “Dreamer” is embroidered into the front with a fluffy, cloud-like fabric.

The front left corner shows three iconic items from Disney Princess movies. The rose is from “Beauty and the Beast,” the glass slipper is from “Cinderella” and the crown is from “Sleeping Beauty.” Additionally, the holographic silhouette of a mermaid is none other than Ariel from “The Little Mermaid.”

This cute hat was found at Star Traders at Magic Kingdom.

This youth baseball cap sports an adorable design of Winnie the Pooh’s face up close. The rim of the hat matches Pooh’s red shirt and bears (get it?) his child-like signature.

The back of the hat has “Disney Parks” embroidered just below the round ears. The Winnie the Pooh Ball Cap can be seen in the Hundred Acre Woods at Magic Kingdom.

The dark side has “SW 1971” written in bold lettering. Along with a sports team-like emblem of a Stormtrooper split with a red Darth Vader. The text reads, “Impe/opers” as in Imperial Stormtroopers.

The red rebel side shows a similar sports team-like logo with a Wookie and R2D2. The text reads, “Wook/els” as in Wookies and Rebels.

This Star Wars Bucket Hat was seen at the Emporium at Magic Kingdom.

This MagicBand is a part of the June 2022 Pride collection. It features a solid black band with several character silhouettes and the word “Pixar” in rainbow shades.

The was found at the Emporium at Magic Kingdom.

This Italian-inspired bag sports a colorful pattern of lemons and mosaics in the shape of Mickey heads.

The interior is a pale blue with sliced lemons in the shape of Mickey’s head and branches of ripe lemons. The bag closes with a magnetic clasp.

The handles are a lime-green pleather and the back of the bag continues with the royal blue shade.

The Adora il Limoncello bag is available for purchase at La Bottega in the Italy Pavilion at EPCOT.

This simple watchband is white in color and features a stylistic drawing of Cinderella in her ballgown as well as several memorable icons from the classic movie. These icons are Cinderella’s coach, a pumpkin, her glass slipper, and two of her bird friends.

The back has a herringbone pattern to keep the watch in place on your wrist. This was seen in the Darkroom at Disney’s Hollywood Studios.

Another white watch band features a stylistic drawing of Belle from “Beauty and the Beast” and several iconic figures such as the Rose, a book, Lumiere, Mrs. Potts, and her son Chip.

This watchband was seen in the Darkroom at Disney’s Hollywood Studios.

The harness has a small metal loop for attaching a leash.

The bottom of the harness is held together by two buckles so that the dog is unable to twist their way out. The buckle is backed by a soft, plush fabric to prevent discomfort.

The Mickey Mouse Harness can be found at the Emporium at Magic Kingdom.

The Minnie Mouse Harness replicates the famous mouse’s cute style with a lacy skirt and polka dot bow. The back has a metal loop for attaching a leash.

Two buckles for keeping the dog from escaping are attached at the bottom and backed with plush fabric to prevent discomfort.

The Minnie Mouse Harness can be found at the Emporium at Magic Kingdom.

In case your smaller traveling companion needs to match your vacationing outfit, look no further than this grey and pink Hawaiian style button-up and cargo pants.

We found this in the Creations Shop at EPCOT.

You never know when it might rain! This little black umbrella with a yellow handle is a must-have.

This was also in the Creations Shop at EPCOT.

Found at the Creations Shop at EPCOT.

This Ariel-inspired outfit has a cute pink crop-top and shorts with shells and an embroidered “A,” complete with a little pink belt.

Found at the Creations Shop at EPCOT.

Going to the Yacht Club? Make sure your plush dresses the part. This set comes with a pale blue polo, white shorts, and dark blue shoes.

This set can be found at the Emporium at Magic Kingdom.

This set includes a pink, green, and yellow striped dress and a large burlap sunhat.

The “Princess and the Frog” inspired set includes a lily pad hat with a pink puff and denim overalls. A small chain links together tiny patches of lily pads and lotuses.

These cute plastic bowls come in a set of three, each in shades of blue. Sketches of Stitch and his island home line the edges of each bowl. While these bowls are dishwasher and food safe, they are not microwavable.

These Stitch bowls with lids were seen at the Emporium at Magic Kingdom.

These swizzle sticks come in a set of four, each featuring a different tropical design. Two sticks are topped with Stitch, one with a surfboard and another with a palm tree.

These were in the Emporium at Magic Kingdom.

The Vader bottle comes with a profile of the Sith Lord and text saying, “You Underestimate the Power of the Dark Side.” The cup is handwash only and not microwavable.

The Vader bottle can be found at the Creations Shop at EPCOT.

The Marvel Insulated Sport Canteen from Corckcicle is covered in the word “Marvel” in varying scripts of red and black.

The lid is sealable and includes a straw for drinking. There is also a handle for ease of carrying.

The Marvel Corkcicle Canteen can be found at Keystone Clothiers at Disney’s Hollywood Studios.

The pack of journals includes a white journal with Minnie/Mickey’s gloved hands making a heart over the word, “Love”.

The last journal is a simple floral pattern with Minnie Mouse heads.

The Journal 3-Pack can be found at Creations Shop at EPCOT.

The Park Pals are character clips for bags, decorations, or as standalone displays using the included stand.

This one features Jack Skellington from “The Nightmare Before Christmas.”

He was in the Emporium at Magic Kingdom.

Next
Series 2 of Park Pals Collectabuilds Drives Into Disneyland Resort