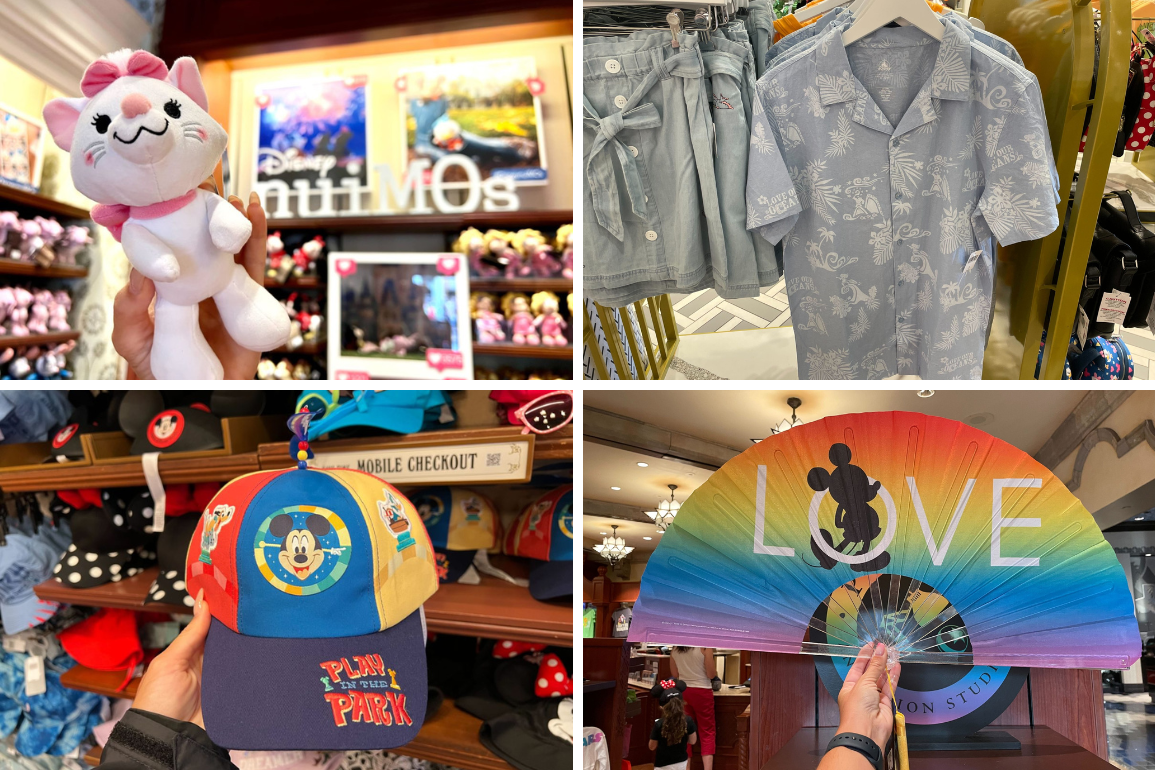 Welcome to the merchandise roundup for June 11, 2022! Each new day brings new merchandise to Walt Disney World, and we know you don’t want to miss a thing, so we gather new releases here. This week, we visited Magic Kingdom, EPCOT, Disney’s Hollywood Studios, and Disney Springs; let’s look at our discoveries.

Marie is a white kitten with a light pink nose and grey whiskers.

She wears a small pink bow on her head in front of a fluff of white fur.

She has a pink collar with a large pink bow on the back.

We found Marie in the Emporium at Magic Kingdom.

This wood cutting board is carved with an image of Stitch with a coconut drink outside a beach shed.

There are surfboards and a palm tree.

The board has brown straps on the sides.

We spotted new Mickey studs on display at Uptown Jewelers in Magic Kingdom.

They are heart-shaped, with a cutout of Mickey at the center and an arrow going through the heart.

This folding fan uses clear plastic so as not to obstruct the ombre rainbow of the fan.

“Love” is in white letters across it, and Mickey’s silhouette is in black through the “o.”

We found this Pride fan at Carthay Circle in Disney’s Hollywood Studios.

“Pride” is in rainbow letters between the stripes. A Mickey head replaces the dot in the “i.”

This was in Tomorrowland Light & Power Co. at Magic Kingdom.

This phone case is also black, with horizontal rainbow stripes. It says “Belong, believe, be proud” in white letters.

Above “proud” is a rainbow ombre stripe with a Mickey head inside.

This was in The Darkroom at Disney’s Hollywood Studios.

This phone case reads “True to your <3.” The heart is a rainbow ombre with a Mickey head inside.

The letters and heart have a 3-D effect.

This was in DisneyStyle at Disney Springs.

This skirt has white buttons up the front, but they aren’t actually functional.

The waist is elastic, with a tie belt.

A couple of Cinderella’s bird friends are printed on the skirt.

Gus and Jaq are printed next to a colorful patch, reading, “They can’t order me to stop dreaming.”

The back of the skirt is blank. It was also in DisneyStyle.

This light blue button-up has a white pattern of “Moana” images.

It reads “Love our oceans” on one sleeve.

The images are in the art style of Maui’s tattoos.

These bike shorts are white, with a paint splatter design.

The Walt Disney World logo is on the left leg.

Among the colorful paint splatters are outlines of Cinderella Castle.

These were also in The Majestic.

The panels of this hat are each a different color.

On the front is a patch of a Mickey board game spinner against a blue background.

The brim is dark blue. “Play in the Park” is embroidered on the corner.

Pluto rides Dumbo the Flying Elephant on a red panel.

Donald is on a Jungle Cruise boat against a yellow background.

Goofy is in an Astro Orbiter spaceship on another ride vehicle.

Chip and Dale are riding on a train against a red panel.

And Mickey drives a Tomorrowland Speedway car across the very back.

The back has a black adjustable strap.

A blue plastic propeller with red and yellow beads is on top.

We found this in the Emporium.

This hat is also available at Disneyland Resort, where most of the “Play in the Park” collection has been released.

This transparent plastic mug has blue beads in the handle.

A red outline of Gus and Jaq runs across one side of the mug, holding a ribbon between them.

This and the rest of the mugs below were in World of Disney at Disney Springs.

This “Up” mug features the Frederickson house floating by on balloons.

The handle is filled with balloon-shaped confetti.

The other side reads, “Adventure is out there!”

The handle is filled with sprinkles to represent Vanellope’s home game of Sugar Rush.

The other side features the cookie medal that Vanellope made for Ralph. The two heart shapes read, “To: Stinkbrain” (Vanellope’s nickname for Ralph) and “You’re my hero.”

This stoneware mug is pale pink with a white bottom. It says “Love,” with a Mickey head instead of an “o.” The letters are dark pink, and the Mickey head is white.

The front of this hat is black, and the brim is yellow.

It reads “New Asgard Tours” in yellow embroidery and features a Norse ship flying along a rainbow.

The back of the hat is white mesh.

It has an adjustable black strap.

This hat and the PopSockets set below were in the Emporium.

The bottom one features Stormbreaker, the axe now wielded by Thor.

This new jacket was in Legends of Hollywood in Disney’s Hollywood Studios. It resembles the armor of Mighty Thor.

It’s mostly black with silver and brown lines. It zips up the front.

There are pockets with red lining.

The inside is red and reads “I choose worthiness” around an image of Mjölnir.

A new set of the Marvel Legends Series action figures have arrived for “Thor: Love and Thunder” as well.

This one features Star-Lord. Each figure comes with a piece that can be assembled to create another character. In this case, you can collect all the characters to get all the parts for Korg.

This and the other action figures below were in Creations Shop at EPCOT.

Mighty Thor (Jane Foster) has interchangeable heads, one with her helmet and one without.

Another version of Thor comes decked out in full armor and helm.

He comes with an interchangeable fist.

Gorr the God Butcher comes with his weapon, All-Black the Necrosword.

This youth tee features Thor and Mighty Thor with their weapons held aloft in a triangle.

It reads, “Raise your hammer for Asgard.”

A gray tee for adults features Thor holding Stormbreaker amidst diagonal lines in shades of blue.

It says “worthy” under the image.

Kids can dress up as the Mighty Thor with a new costume.

It comes with the outfit, cape, and mask.

You can also pick up Thor’s new outfit.

The costumes come with a reminder that masks such as the one included cannot be worn within the theme parks.

These new Guardians of the Galaxy: Cosmic Rewind jump point magnets were in Creations Shop.

Rocket appears to be split in half by the red-purple jump points behind him.

This Groot pen was also in Creations Shop.

It depicts a young Groot smiling.

One of his legs extends to become the pen.

This polo is mostly white, with a gray stripe across the chest, and a black top section.

It’s made of a mesh material.

A tiny Mickey head is embroidered in white on the left breast.

The Nike swoosh is printed on one sleeve.

This pullover zips up the chest.

It also has the Nike swoosh on one sleeve.

Mickey’s full body is embroidered on the chest.

This is all black.

This mesh polo is also all black but made of a lightweight material.

Mickey’s full body is embroidered on the left breast.

The shirt is almost see-through in the sunlight.

We found this set of six garden stakes at Port of Entry in EPCOT.

One of the wooden stakes features Mickey, while the others are labeled for specific vegetables.

There are two stakes for parsley, while the other stakes are for tomatoes, cucumbers, and carrots.

This pin was at Pin Traders in Disney Springs.