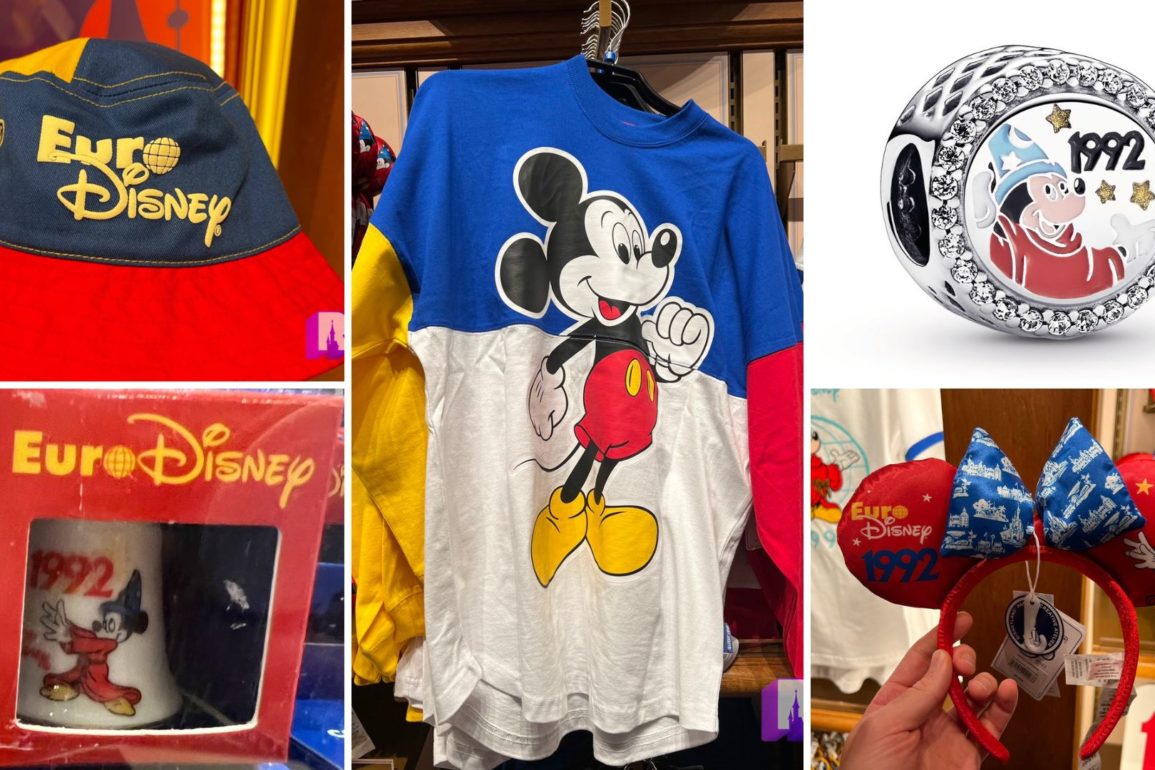 The new collection is available in Flora’s and Disney Fashion at Disneyland Paris. DLP Report shared photos of the new merch, including a Spirit Jersey, t-shirts, and an ear headband.

Mickey, in his classic red shorts and yellow shoes, is on the front of the jersey. The top is blue, while the bottom is white. One sleeve is yellow, and the other is red.

The ear headband is red, with Sorcerer Mickey doing magic on the left ear. “Euro Disney 1992” is on the right ear. The blue bow in the center is printed with various icons from around Disneyland Paris, including Sleeping Beauty Castle.

The keychain is a fabric strap with “Euro Disney” and Mickey on the red side.

This white tee has “Euro Disney 1992” on the front in teal letters. Sorcerer Mickey is in front of a teal globe logo.

On this blue tee, Mickey gestures at a similar globe logo, printed in black. “Euro Disney” is above.

This thimble is white and also features Sorcerer Mickey and “1992.” It comes in colorful Euro Disney packaging. Much like the Walt Disney World 50th Anniversary Vault Collection, some of the items in the Euro Disney REMIX Collection are reproductions of original merchandise.

The bucket hat has similar red, yellow, and blue color-blocking to the Spirit Jersey. “Euro Disney” is on the front, with Mickey to the side.

The circular Pandora charm features Sorcerer Mickey and the year 1992 on one side.

Here is a closer look at the charm, which has diamonds along the edge.

The Euro Disney logo is on the back.

What retro merch from the Euro Disney collection are you hoping to get? Let us know in the comments.

Next
BREAKING: Minnie Vans Returning to Service on June 29 at Walt Disney World