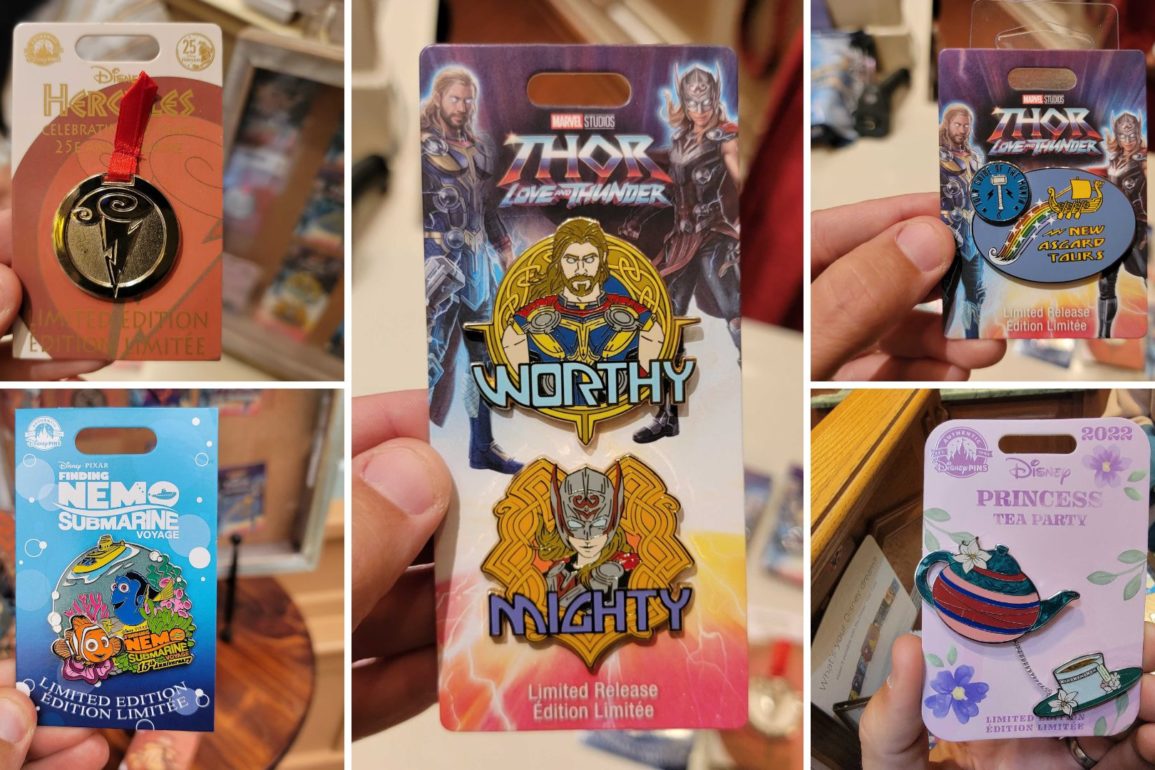 Several new limited edition and limited release “Hercules,” “Thor: Love and Thunder,” and more pins have arrived at Disneyland Resort this week. We found most of these at 20th Century Music Co. in Disneyland or Atwater Ink and Paint in Disney California Adventure.

This pin features Nemo and Dory under the sea, with a submarine from the attraction floating above them. It is a limited edition of 2,000.

One of these mystery boxes contains two out of ten possible pins.

Each pin features a different scene from the film on a vase.

This jumbo pin features Hades, Pain, and Panic looking down at an image of Hercules astride Pegasus.

It comes in a box with a Grecian pattern around the plastic window.

This pin resembles Hercules’ golden medallion on a red ribbon.

A lightning bolt descents from the clouds on one side.

Megara and Hercules look lovingly at each other on this pin, with Phil and Pegasus behind them. Herc’s medallion is at the bottom.

This pin features Thor and Mighty Thor, a.k.a. Jane Foster. The “Thor: Love and Thunder” logo is below them.

This one features Valkyrie riding her winged horse and brandishing a sword. A triangle with Nordic designs on it is behind her. She, the horse, and the triangle are printed in shades of red, yellow, and purple. It has a limited edition size of 4,000.

A Norse ship followed by a rainbow is on this pin, which advertises “New Asgard Tours.” The piece at the top corner features the hammer Mjölnir and reads “Tour Guide of the Month.”

The bottom pin features Jane as Thor and reads “Mighty.”

This pin is inspired by Ariel from “The Little Mermaid. The teapot and cup are both patterned with green scales. The spout and cup handle are blue seahorses. The top of the pot is purple with orange sea stars.

The saucer beneath the cup is purple. The label of the teabag reads “Seaweed Infused Tea.” The pot and cup are connected with a small gold chain.

Each of the Princess Tea Party pins has a limited edition size of 4,000.

The teapot and cup of this pin resemble Jasmine’s teal green outfit. The shape of the pot is similar to that of Genie’s lamp.

The Mulan teapot has a green base, with pink, red, and blue stripes around it like Mulan’s outfit. The cup is light blue, with white flowers sitting on the green saucer around it.

This Character Gift Boxes pin features various icons and elements from “The Princess and the Frog” in a purple box. Among the items are a trumpet, lily pad, fairytale book, mirror, and colorful bottles. Ray the firefly appears in the corner. The pin has a limited edition size of 2,250.

Check out these new Hades, Hercules, and Woody FiGPiNs too.