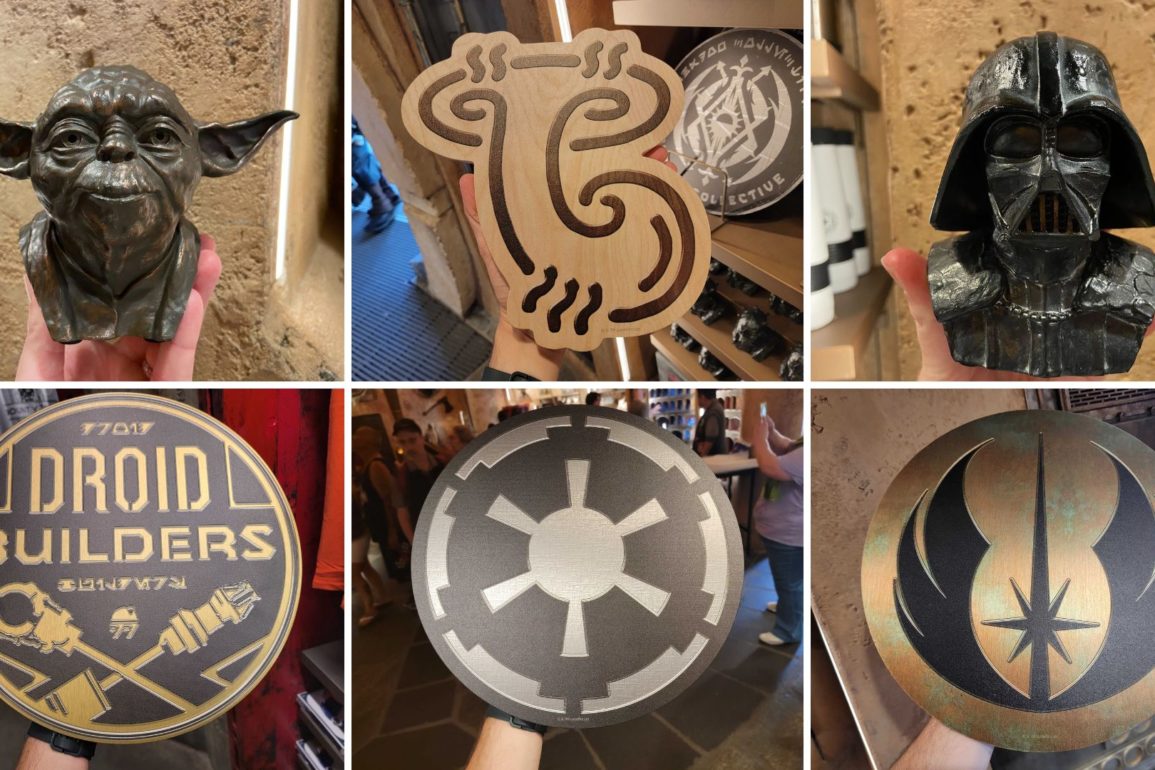 Dok-Ondar’s Den of Antiquities has a few more mini busts and 2D signs to add to your “Star Wars” collection. These are all available in Star Wars: Galaxy’s Edge at Disneyland.

These busts are just a bit larger than a hand. Vader looks like he has been carved out of black rock.

Yoda is made from a more bronze-looking stone.

This circle sign is golden with the Jedi logo in black in the center. The logo resembles a shining lightsaber with a pair of wings around it.

Each sign has a wire on the back to hang them.

This stark red and black design is the crest of the Sith Eternal, a secret Sith cult based on Exegol. The center of the symbol is a black pointed feather-like shape.

Darth Vader is boldly depicted on this red oval. The black image depicts one half of Darth Vader’s helmet. The helmet is illustrated in aggressive red and black strokes. The name “Vader” appears to the right of the helmet.

This circular sign is black with the silver Imperial crest, representing the dreaded Galactic Empire.

Dok-Ondar is even selling a sign representing himself and his shop. This piece consists of a few curved, brown lines on a wooden background. It matches the shop’s logo.

This 2D art is a circular design, similar to a shield. Aurebesh lettering spells out “Shadow Collective” on the top. The phrase is also written in English below the central image.

The black and white imagery is scratched and weathered. It appears that this Syndicate member has seen a lot of action.

Finally, this new “Droid Builders” sign was at Droid Depot.

It features the same crossed droid arms featured on other “Droid Builders” merchandise. The sign is black, while the design is golden.

Many of these 2D signs are also available at Walt Disney World.

Which “Star Wars” signs or busts will you display in your home? Let us know in the comments.