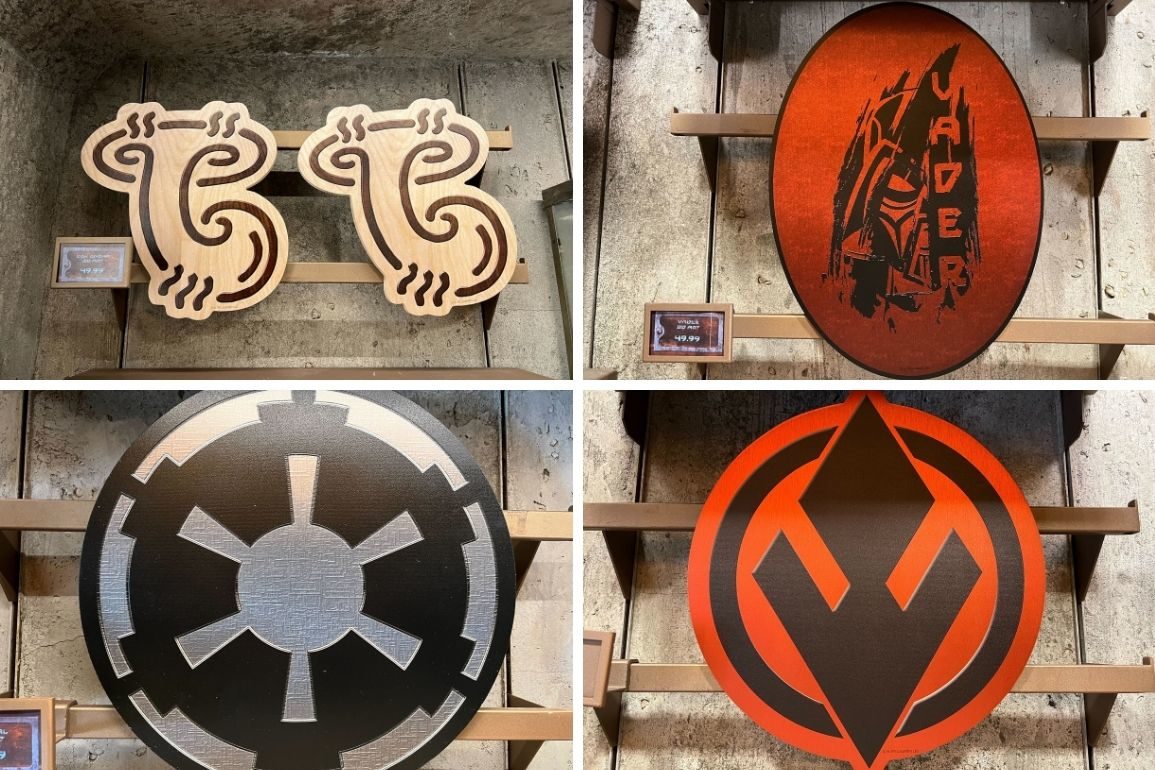 An amazing new line of 2D signs is available now at Dok-Ondar’s Den of Antiquities. We discovered these gorgeous display pieces at Star Wars: Galaxy’s Edge in Disney’s Hollywood Studios.

We found a stylized representation of Dok-Ondar. It is a fitting tribute to the Ithorian shop owner.

This 2D art consists only of a few curved, brown lines, on a wooden background. It matches the shop’s logo.

Next, we noticed this eye-catching Shadow Collective piece.

This 2D art is a circular design, similar to a shield. Aurebesh lettering spells out “Shadow Collective” on the top. The phrase is also written in English below the central image.

The black and white imagery is scratched and weathered. It appears that this Syndicate member has seen a lot of action.

Also in the 2D Art collection is the Imperial logo.

This crest represents the dreaded Empire, as seen throughout the “Star Wars” series.

This stark red and black design is the crest of the Sith Eternal.

This would liven up any cloning facility on Exegol.

Here is another 2D art piece for Sith followers. “Knights of Ren” appears in Aurebesh and English on either side of the oval design.

The insignia consists of jagged, red lines on a black center. They are reminiscent of Kylo Ren’s broken helmet.

Finally, Darth Vader is boldly depicted on this red and black oval.

The image depicts one half of Darth Vader’s helmet. The helmet is illustrated in aggressive red and black strokes. The name “Vader” appears to the right of the helmet.

The scratched, hurried feel of the image and lettering invokes Vader’s infamous impatience.

The wonderful new 2D art can be obtained from Dok-Ondar’s in Star Wars: Galaxy’s Edge at Disney’s Hollywood Studios. Will you be paying homage to Vader in your den? Perhaps you’d prefer to display Dok-Ondar in the hallway? Let us know in the comments.

Next
Pteranodon Flyers Reopens at Universal’s Islands of Adventure