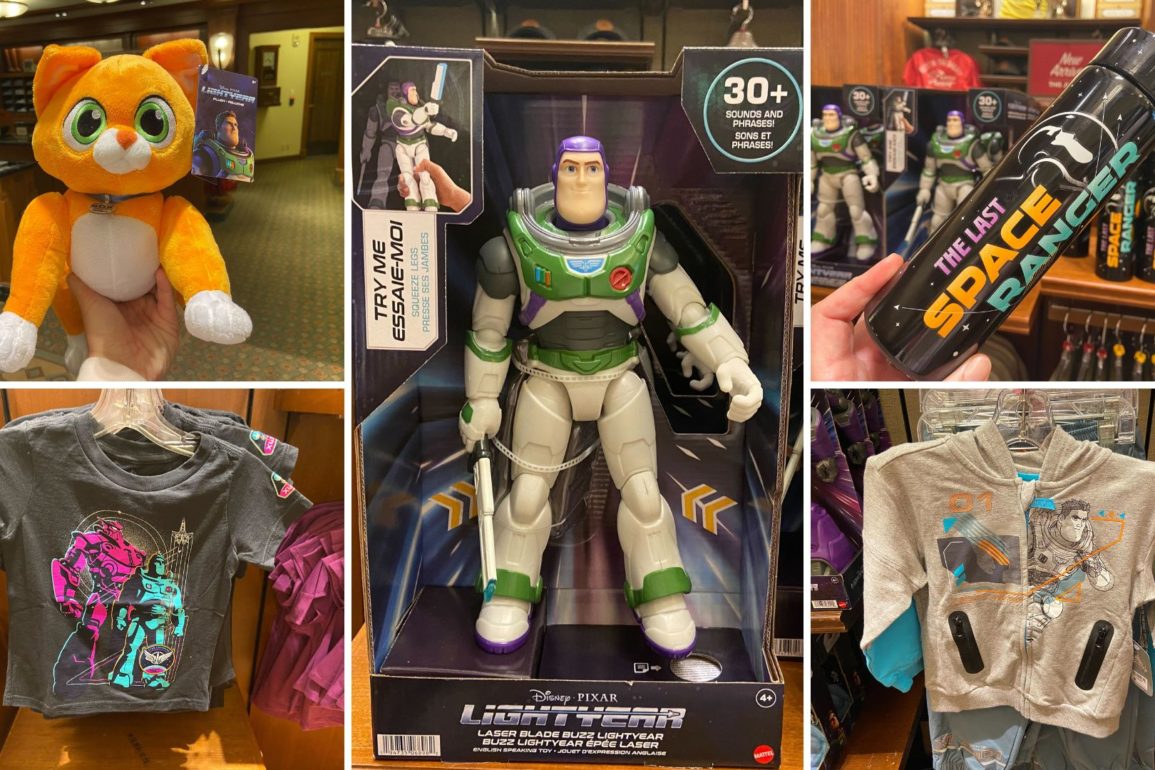 Merchandise for Pixar’s “Lightyear” has landed at Disneyland Resort. We found most of these new items at Elias and Co. in Disney California Adventure.

This black metal bottle reads “The Last Space Ranger” on one side.

Buzz Lightyear is pictured in shadows and teal on the other side.

A spaceship blasts off behind him.

The design of the bottle glows in the dark.

This bottle is plastic and features different images of Buzz.

The cap and bottom are bright green, while the center is black.

It has an orange straw and strap.

This jacket is tan, with some grey and orange touches.

Under the chest pockets, the shirt jacket reads “Star Command XL-15 Spaceship” and “To the exact specifications of Space Ranger Buzz Lightyear.”

These army green cargo pants can be turned into shorts thanks to zippers at the knees.

They have large pockets and feature the Star Command logo.

Adults can complete their “Lightyear”-inspired outfit with this hooded jacket.

It’s also an off-white tan color, with army green touches. “XL-01” is on a patch on the chest.

Lettering in an alien language is on the back.

This tee is dark grey and features Lightyear and Zurg on the front.

This tee is pink and features Buzz, Hawthorne, and Sox.

The socks do not feature Sox the cat, but do read “XL-15” in orange.

There are touches of bright green, all against a black background.

“Star Command” is on the bottom.

This long-sleeved shirt is white, with the same design that was featured on the back of the adult jacket.

This heather grey tee says “Property of Star Command” down the front.

The words cross over a black pocket.

A ship — The Armadillo — is featured on the back.

This heather grey hoodie has blue on the sleeves and blue lining. Buzz is on one side of the zipper.

These pants are blue with an orange waistband.

Sox is the robot cat companion to Buzz.

He has a blue collar with a golden plush tag reading “Sox, Personal Companion Robot.”

He has over 30 sounds and phrases.

This second Buzz figure is similar to the one above, but doesn’t include a laser blade or speak.

Villain fans can get this figure of Buzz’s enemy, Zurg.

He looks like a large purple and grey robot.

The tiny Zurg and Buzz can go inside their respective ships.

Zurg’s ship is purple like him. It can blast lime green harpoons.

This metal keychain has three charms attached to it.

The large charm is Buzz, pictured in teal, with orange and pink lines around him and “Star Command” above him.

A triangular charm also reads “Star Command” and shows a spaceship blasting off.

The third charm is a circle and features Sox.

This keychain and the toy below were in Knick’s Knacks.

This set includes a Buzz figure, as well as a small Sox figure and a crate for the cat.

Both figures are posable.

It’s rumored that Space Mountain at Disneyland will get a “Lightyear” retheme. Read our review of “Lightyear” too.

Next
Temporary Stage Erected at EPCOT For ‘Harmonious Live!’