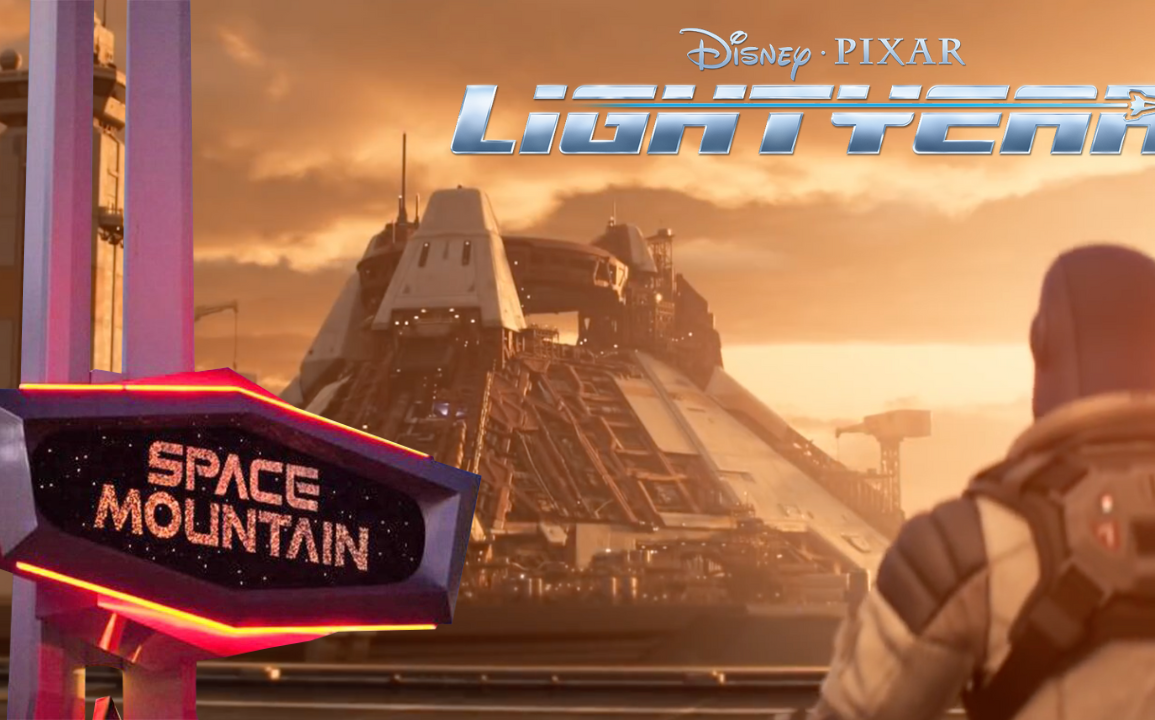 RUMOR: Buzz Says ‘Space Mountain’ at Disneyland will be Replaced with ‘LIGHTYEAR’ Mountain as Part of Tomorrowland Overhaul

It is well known at this point that the long-awaited overhaul of Disneyland’s Tomorrowland is on the way, with an announcement of the project expected to be made at the D23 Expo in September. There has been much speculation about what new and exciting attractions Disneyland might add to the thematically incoherent mess left behind by the 1998 overhaul, but the release of Disney & Pixar’s Lightyear has shed some light on the project.

Throughout the film, Buzz Lightyear makes use a launch platform inside of a large structure. As the movie progresses, the structure looks more and more familiar. By the end of the film, the structure has a shadowed silhouette that is unmistakably that of Space Mountain.

While we don’t have clear screenshots of this later form, the trailers that have been released to this point do show the Space Mountain structure on several occasions.

So, rumor has it that Space Mountain at Disneyland will be overhauled (not simply receiving an overlay like Hyperspace Mountain or Space Mountain Ghost Galaxy) to represent the “Lightyear” film as the centerpiece of the Tomorrowland overhaul that will be under construction for the next few years. This rumor seems somewhat confirmed by the clear presence of the structure in the film.

What would the re-themed attraction include or change from the classic Space Mountain? We simply still do not know at this point as the project isn’t public yet.

Funny enough, this wouldn’t be the first time a permanent IP overhaul of Space Mountain at Disneyland was pitched. Famously, in the early 2000’s, we came very close to a “Stitch Mountain” attraction.

Of course, the last several years have seen Disney focus on removing or overlaying many attractions and such that are either free of the inclusion of current franchises or are themselves original Disney Parks ideas. The Great Movie Ride, the Universe of Energy, and California Screamin’ are great examples of this, as is the Red Rose Taverne overlay permanently replacing the Pinocchio restaurant in Fantasyland at Disneyland. Toy Story also took over Redd Rockett’s Pizza Port near Space Mountain just a few years ago, making the establishment Alien Pizza Planet.

Funny enough, Tokyo Disneyland announced they are knocking down and rebuilding their Space Mountain in the not-too-distant future as well, but it’s unclear if the Disneyland project will be even close to that scale. Walt Disney World is not expected to update the original attraction, but rumors have indicated that a “Lightyear” update may come to Space Ranger Spin at the Magic Kingdom.

What else is planned for the future of Tomorrowland at Disneyland, and will it include a roller coaster trip to infinity and beyond? You’ll just have to stay tuned to find out…