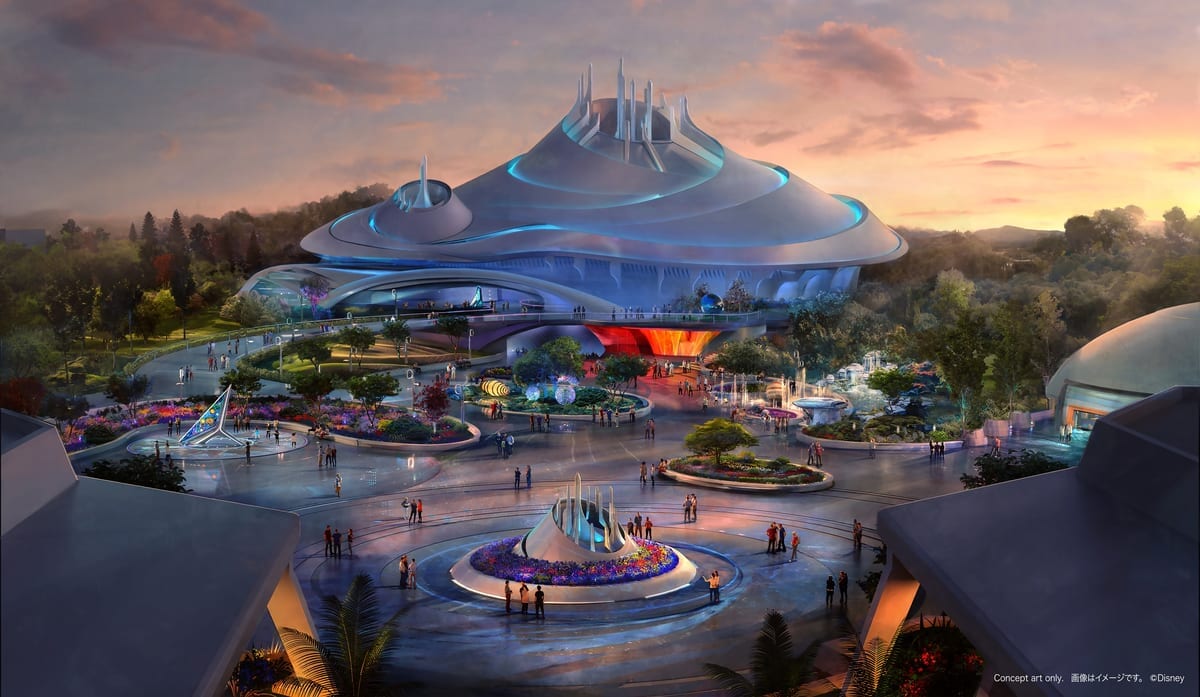 The Oriental Land Company has announced that the classic Space Mountain attraction at Tokyo Disneyland is to be replaced with an entirely new version of the attraction, set to open in 2027. With this, Space Mountain as we know it will close permanently at some point in 2024, following the park’s 40th Anniversary celebrations.

The announcement came with a single piece of concept art, showing the new plaza to be built around the new attraction in Tomorrowland. The iconic attraction and its building, which was cloned from the Disneyland version and opened with the park on April 15, 1983, are presumably to be demolished or heavily modified for this new version. The Oriental Land Company said the following about the project:

“Space Mountain, an exhilarating, indoor roller coaster that takes guests on a high-speed joy ride through space, has been a favorite of guests since the Grand Opening of Tokyo Disneyland in 1983. This entirely new attraction will maintain its original concept as an indoor roller coaster, but will have enhanced performance and immersive special effects that will give guests even more thrills on this exciting rocket ride.

The new Tomorrowland plaza will express the connection between Earth and the universe, representing an image of a future where humans are in harmony with nature. Guests will be able to enjoy moments of rest and relaxation in this plaza where various icons and other design elements create a sense of hope for the future. After dark, the area will draw guests into a spectacular world of light and soundscapes.”

The new attraction building design seems to take inspiration from Shanghai Disneyland’s Tomorrowland, with a large ramp leading up to the attraction similar to Tron Lightcycle Power Run.

Approximately ¥56 billion ($437 million) will be spent on this project, with the Space Mountain name and theme to be retained as well as Coca-Cola’s sponsorship. The new version will open in 2027.

What do you think about this project? Let us know in the comments below!

Three Rides at Hollywood Studios Fail to Open With the Park, Disney Refuses to Edit Doctor Strange in the Multiverse of Madness for Release in Saudi Arabia, and More: Daily Recap (4/26/22)