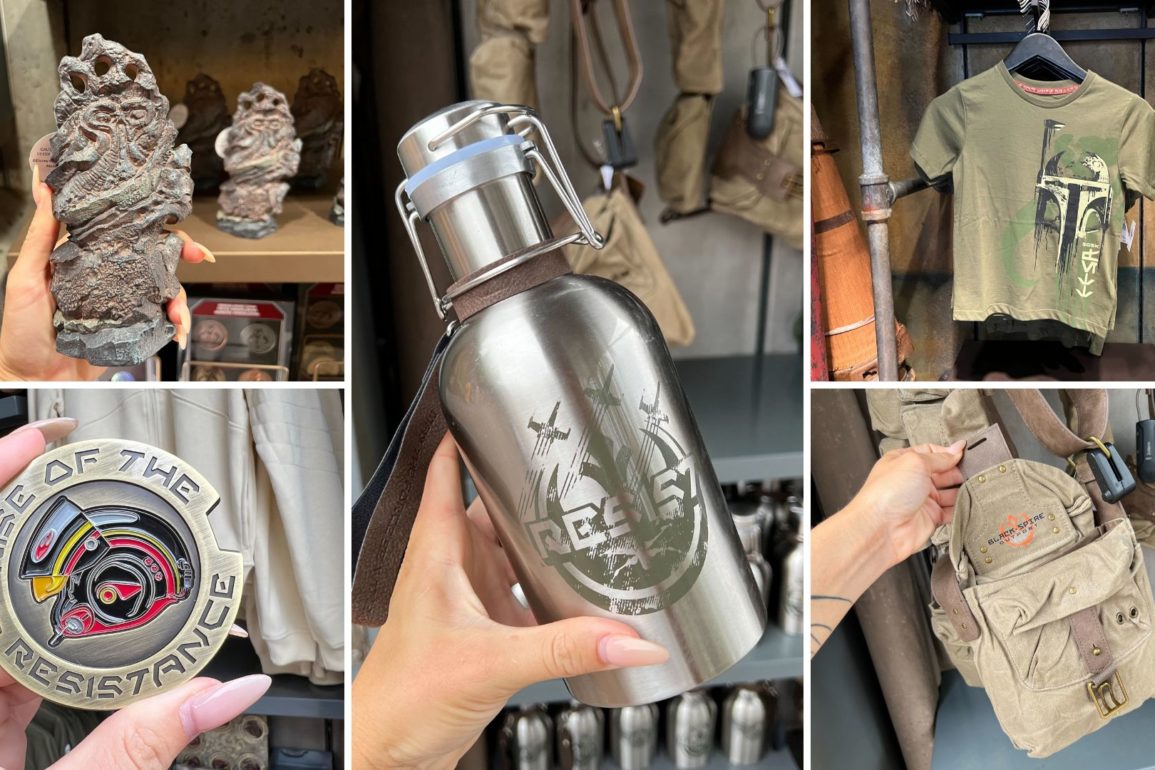 This metal bottle comes with a brown pleather strap.

A weathered version of the Resistance logo is on one side.

X-Wings fly over the logo and it reads “Resist.”

The other side reads “Enlist today” under pilot wings and a helmet.

The strap reads “May the Force be with you” and “Black Spire Outpost.”

This magnet has a bronze edge reading “Rise of the Resistance.” An X-Wing pilot’s helmet is at the center.

This large magnet is a detailed recreation of the Millennium Falcon.

It can also be used as a bottle opener.

This brown canvas bandolier has several small pouches on the strap.

The pouches are kept closed with dark brown straps.

The main bag clips closed with a brown strap and metal hook.

Inside, it reads “Black Spire Outpost” over the orange Resistance logo.

This off-white jacket zips up.

A blue and gold Resistance patch is on the left sleeve.

On the right breast is a patch resembling the military-like insignia incorporated into Resistance uniforms.

This figure resembles rock with the image of an Ithorian (Dok-Ondar’s species) carved into it.

This is a replica of the Ithorian gravestone found outside the shop, belonging to Dok-Ondar’s parents.

The base opens up to reveal a small compartment.

It has a magnetic cap.

You can find this in Dok-Ondar’s Den of Antiquities.

It features Boba Fett’s helmet, Mythosaur skull symbol, and his name in Aurebesh.

On the sleeve is a minimalist symbol resembling a Mandalorian helmet.

Check out these collectible “Star Wars” coins from Dok-Ondar’s too. And let us know what you think in the comments below!