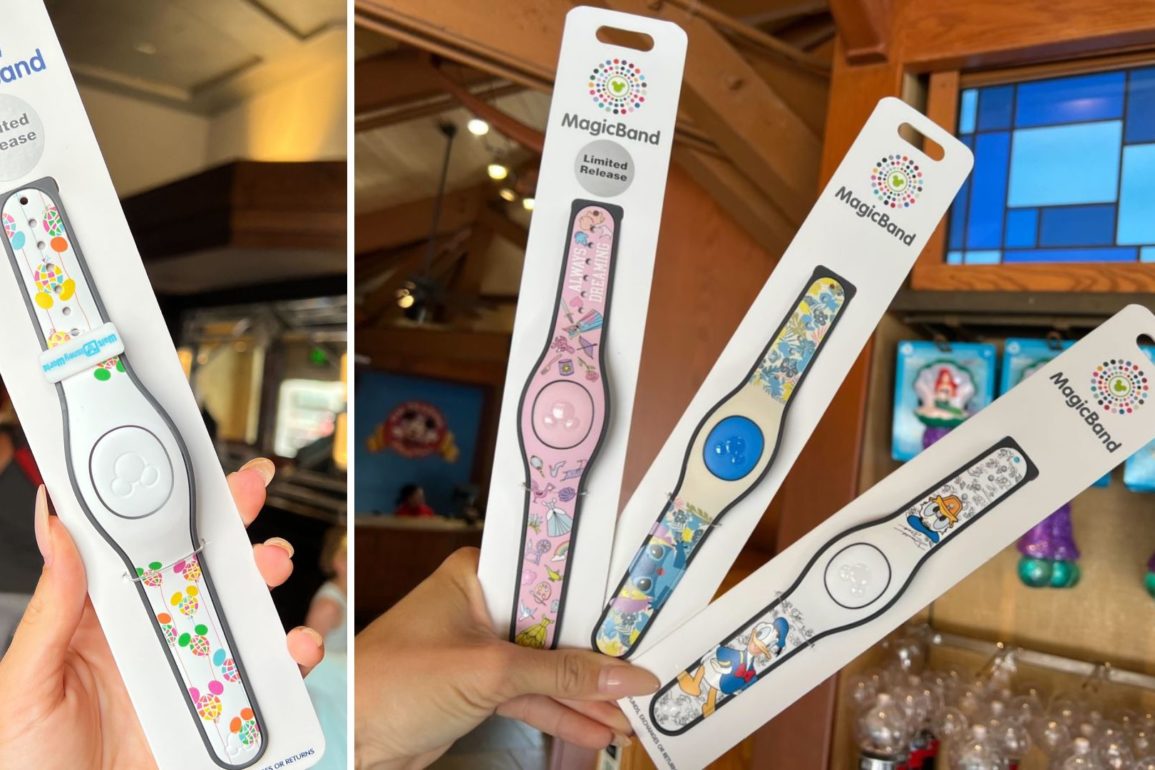 Five new MagicBands, including a limited release Vault Collection balloons band, have arrived at Walt Disney World. We found the first three at Pin Traders in Disney Springs and the last two in the Darkroom at Disney’s Hollywood Studios.

Three of the MagicBands are open edition.

The base MagicBand is pink.

It reads “Always Dreaming” on one end. Both ends feature icons, sidekicks, and dresses of various Disney Princesses.

You may recognize Hei Hei from “Moana,” Belle’s ballgown, a purple seashell for Ariel, a sun lantern from “Tangled,” and Tiana’s crown.

This MagicBand is white, with Donald’s full body on one end and his face on the other.

Around Donald’s face are black and white images of Donald in different outfits from over the years. His autograph is above his face.

The same small images are behind him on the other end of the band.

This tropical MagicBand is off-white, with a blue Mickey puck at the center.

Stitch is on one end, with colorful tropical plants behind him.

You may spot a hidden Mickey on one of the flowers.

The plants are on the other end of the band too, with small blue silhouettes of Stitch.

This pale yellow-brown MagicBand features Mickey Mouse on one end.

Both ends are covered in images of brown popcorn.

Around Mickey, the band reads “Main Street Popcorn” and “Tasty, fun, popcorn for everyone.”

Finally, this band is white.

There is a Walt Disney World slider.

This matches the rest of the Vault balloon collection, including a Spirit Jersey.

Which of these MagicBands will you be wearing on your next Walt Disney World trip? Let us know in the comments.

MagicBand+ will be debuting later this year but we got a sneak peek of the new bands when they were accidentally released early.

Next
Fourth of July Fireworks Tag Returning to EPCOT