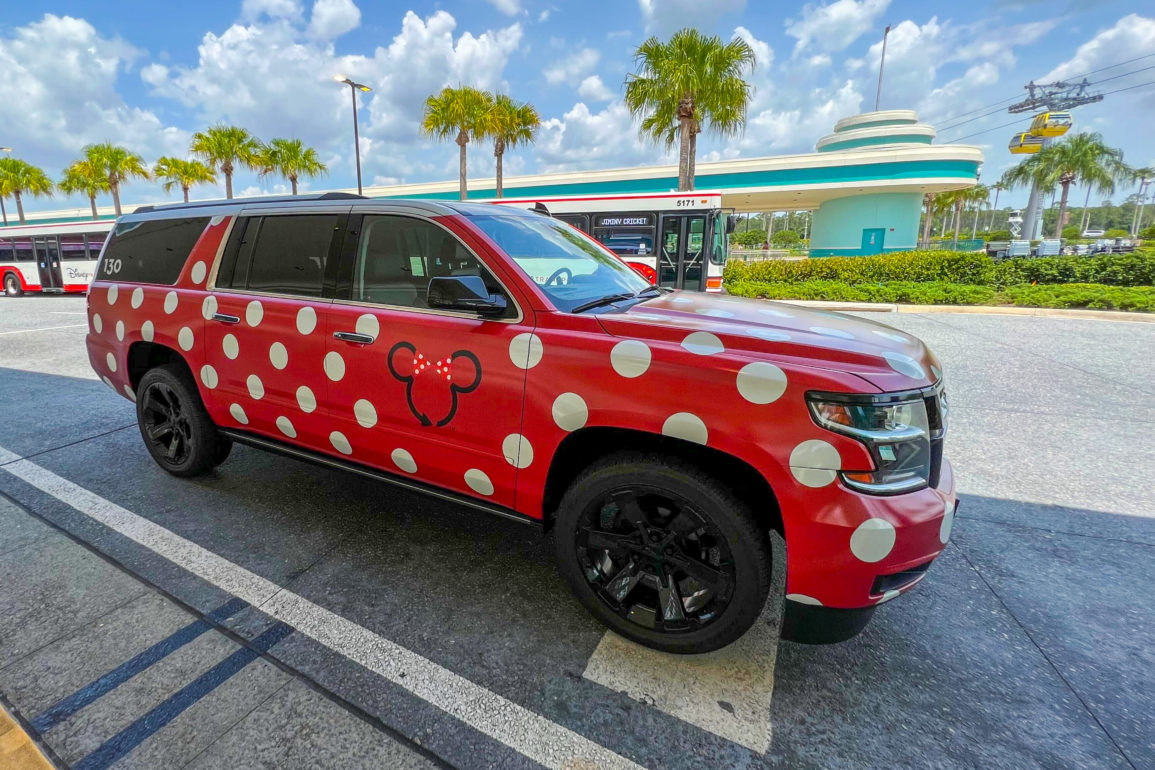 Walt Disney World announced that Minnie Vans would be returning to service on June 29, but we were able to catch a Minnie Van ride today—two weeks ahead of schedule. We also saw a Minnie Van at Disney’s Beach Club Resort and Disney’s Contemporary Resort as part of this early rollout.

Guests can book a Minnie Van through the Lyft app. Minnie Vans were available at all four Walt Disney World theme parks today, and each park offers a Minnie Van pickup or drop-off point which can be selected as you schedule the ride. Note that while all users may see these drop-off points, only a fraction of Lyft users will be offered the option to select a Minnie Van.

At about 2:45pm this afternoon, a standard or accessible Minnie Van was $24.24. When the service launched in 2017, Minnie Vans were available for a flat rate of $20.

Today, we took a Minnie Van from Disney’s Hollywood Studios to the nearby Caribbean Beach Resort. The Lyft app even shows a polka-dot Minnie Van on the map while you wait.

They are picking up at gate 30.

Sure enough, gate 30 is labeled for Minnie Vans.

Once our Minnie Van arrived, the app advised that we would only have 5 minutes to meet them at the pickup location.

Unfortunately, the service is not picking up and dropping off at the front of the park, nor will they be in the foreseeable future.

These Minnie-inspired Chevrolets are red with large white polka dots and a white roof, and there is a Minnie-shaped arrow symbol wearing a bow on the passenger door.

According to our driver, Minnie Vans started testing about two weeks ago. Only about 10% of guests could access the service then, and the amount has slowly gone up. They are now operating at about 30% visibility.

Our driver was very courteous and opened the door for us both when picking us up and dropping us off. Minnie Van drivers are also known for being extremely knowledgeable of Walt Disney World and can answer many questions guests may have.

There are red phone chargers available inside with a variety of connectors for both Apple and Android devices.

We noticed that the radio was playing a Disney’s Hollywood Studios soundtrack. There are different soundtracks for each park and Disney Springs — so you get custom music based on where you are leaving or your destination.

Each van has two brand new car seats available, as was the case during the service’s initial run from 2017 thru 2020.

They also carry a blanket for pets or service animals to lay on. Plus, they have an umbrella to take you to and from the car in the rain.

While tipping was said during the previous launch to be unnecessary as the Disney Minnie Van Cast Members are paid hourly, the Lyft app does allow for tipping after the ride is completed. You can also rate the driver at this time.

According to the Cast Member, operations will go up to approximately 50% soon and reach 100% by the official return on June 29. They are taking feedback from riders right now, so if you do catch a Minnie Van, let them know what you think!

For additional details on the overall Minnie Van experience, check out our detailed review from when the service first launched.

Next
TriceraTop Spin Closed for Refurbishment at Disney’s Animal Kingdom