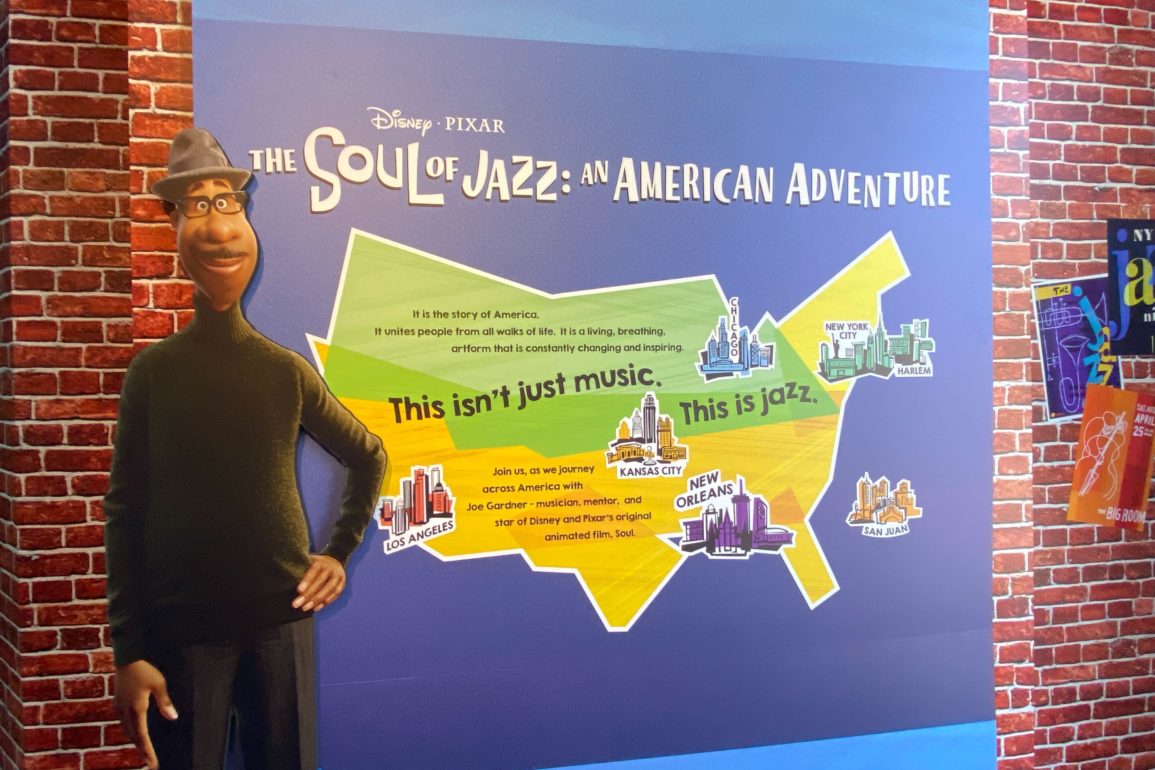 There were band students visiting the exhibit when we arrived.

The opening date of June 1 is posted, but no end date for the exhibit’s Downtown Disney District run has been released.

Inside, a standing cutout of Joe Gardner from Pixar’s “Soul” is next to a map of the U.S.A. on the wall. The map highlights cities featured in the exhibit.

There are faux brick walls with jazz posters on them.

Instruments are on display in cases throughout the exhibit.

Each panel talks about the history of jazz in that city, and mentions famous musicians who played there.

More standing cutouts from “Soul,” including Joe Gardner and the jazz band from The Half Note are gathered around a piano in one corner.

The faux brick wall behind the piano has a sign for The Half Note, a jazz club featured in the film.

The piano is real, and guests can sit at it to play.

Concept sketches for “Soul” are framed on the wall.

Maquettes of Joe Gardner at the piano and Dorothea Williams playing saxophone are in one display case.

A clarinet, snare drum, and trumpet are in other display cases.

Some Disneyland-related photos, replica tickets, and replica flyers have been added to the exhibit for its opening in Downtown Disney District.

The replica tickets are for Dixieland at Disneyland events from 1961 to 1965.

The flyer is also for Dixieland at Disneyland.

There’s a photo of Walt Disney presenting Louis Armstrong with a Mousecar award in 1964.

Another photo is of Benny Goodman performing at Disneyland in 1962.

This photo is of the Young Men From New Orleans featuring Kid Ory performing aboard the Mark Twain Riverboat during the 1963 Dixieland at Disneyland celebration.

And this photo shows a wide shot of the Mark Twain Riverboat with musicians performing onboard during the 1962 Dixieland at Disneyland celebration.

Watch our video tour of The Soul of Jazz: An American Adventure exhibit at Disneyland below.