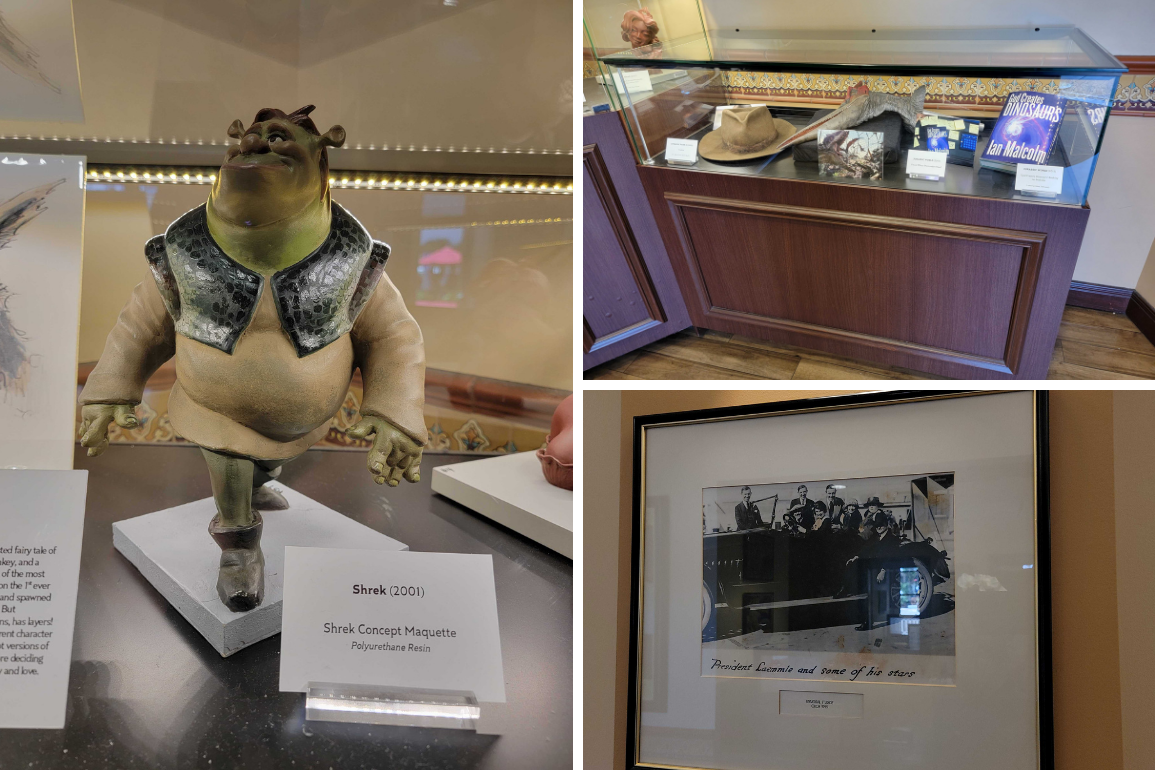 There’s a hidden gem located in the Guest Relations Department at Universal Studios Hollywood — a huge prop display from fan-favorite Universal films like “Shrek” and the “Jurassic Park” series is tucked away here.

Props and Art from the ‘Jurassic Park’ Franchise

The “Jurassic Park” collections features props from almost every movie in the franchise. From Dr. Alan Grant’s signature hat to a Pteranodon head for visual effects.

This dusty fedora has survived several Velociraptor attacks, one plane crash, and an epic Spinosaurus/T-Rex battle. The singe marks and stains certainly reflect it.

The Pteranodon head was used in “Jurassic World” by animators for visual effects purposes. The head has a red crest and mask, as well as a beak full of teeth.

Instead of writing about the ‘Chaos Theory’, Ian Malcolm has been busy writing a book about his experience in “Jurassic Park”. The prop was first used in “Jurassic World”.

Sarah Harding, who was first introduced in “The Lost World,” gets up close and personal with a cute baby stego (causing the mommy stego to go ballistic). The baby stego’s maquette can be seen on display here.

Dr. Alan Grant’s biggest ‘Uh Oh’ moment was when he picked up the hatched dinosaur eggs in a place where they absolutely shouldn’t be. The broken shells are now on display.

“Dodgson! I got Dodgson here!” said Nedry, several days before total disaster. Nedry was given a Barbasol can with a secret compartment for hiding dinosaur embryos, which he was hired to steal by Hammond’s competitor.

Hammond’s iconic bamboo cane topped with a mosquito-inhabited amber is also among this collection.

Concept Art and Maquettes From ‘Shrek’

The next collection comes from the first film from the “Shrek” franchise.

There is also a Shrek concept maquette made from resin on display as well. Look at that full head of hair!

Tom Hester’s original concept maquette of Fiona is just a tad different than the current model.

This is a sketch of the proposed costume designs for studio tour guides by Edith Head. So stylish!

Photo of President Laemmle and Some of His Stars

In addition to the props on display, there are also photographs early 1900’s on the wall.

This picture is from the Roarin’ Twenties.

This last image appears to be from the set of a western filmed in 1925.

Quite the hidden prop display at Universal Studios Hollywood’s Guest Relations! Let us know what you think of this collection and if you’ll be stopping in to see them in the comments below!