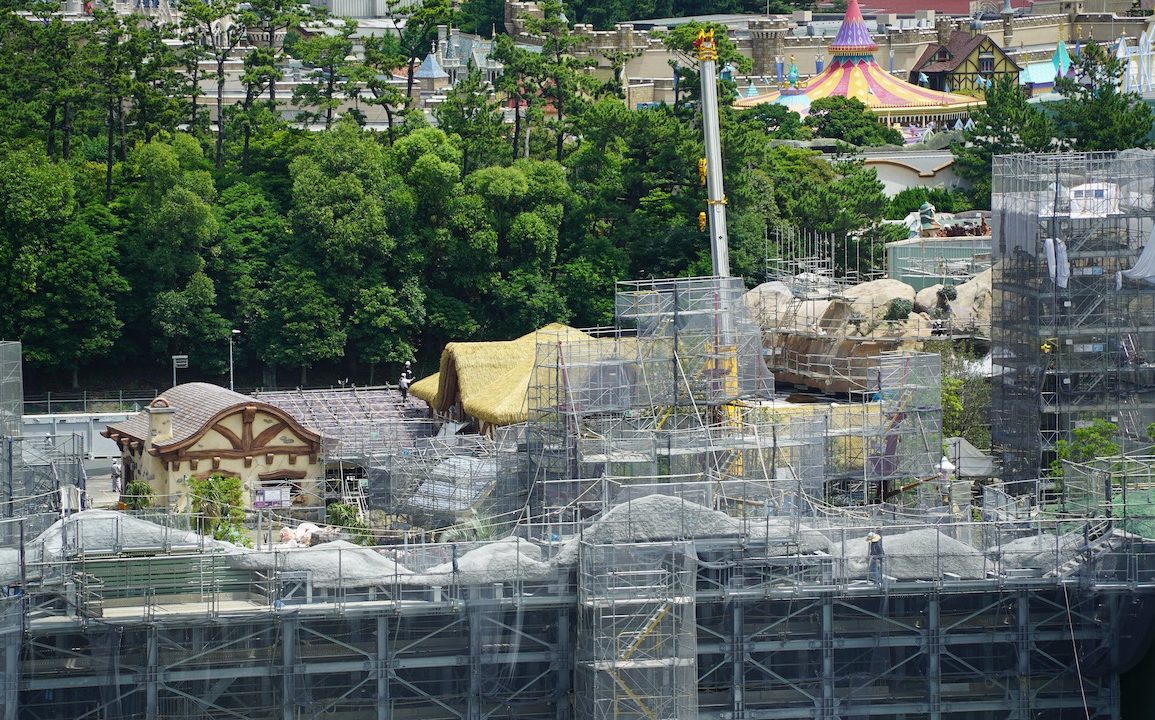 Fantasy Springs Takes Shape with Scaffolds Down on ‘Tangled’ Building, North Mountain Painting Underway, and Much More at Tokyo DisneySea

Fantasy Springs, the exciting $2 billion expansion featuring “Frozen,” “Tangled,” and “Peter Pan” areas is still under construction and set to open sometime next year, and there’s been so much change at the site that we headed down to take a look for ourselves. You can get a basic overview via our YouTube channel, and dive further into the details with photos and descriptions below!

We can make out the giant glass window of the Fantasy Springs Hotel from the other side of Tokyo Disneyland at the moment. The light pink color sure helps the hotel stand out.

Scaffolds are pretty much down on the vast majority of the hotel’s west side. Some still remain on that north wall facing Tokyo Disneyland.

Ornamentations and filgrees are in place and the hotel is ready on the exterior.

It’s a bit more bland of a design than we would’ve expected from Tokyo Disney Resort, in all honesty. But the… shall we say unique exterior of the Toy Story Hotel does disguise a delightful experience inside, which we hope the Fantasy Springs Hotel matches.

The south side of the main building is still partially covered, although most of it is out of scaffolds.

The entrance porte-cochère still needs some work, as does the dome over the lobby.

Structures flanking the porte-cochère are also still under scaffolds, although painting looks to be just about complete.

Landscaping is largely done, although more grass and smaller bushes are probably still needed. The concrete staircase leading down to Bayside Station appears to be almost done too.

Lovely filgrees and ornamentations have been installed on the south wing of the hotel, with all of it no longer under scaffolds.

The three tunnels under the structure still are covered, however.

Not much left on the outside of the south wings either.

Looking into the park reveals most of the work is focused on the lobby area of the hotel. But surely it won’t be long before we see these come down too!

The North Mountain looks to be undergoing painting, with the whitish-blue color already visible on the lower sections.

Painting hasn’t reached much of the other superstructure hiding the “Frozen” attraction, but it looks like rockwork is nearing completion.

Structures surrounding the mountain and much of what will become Arendelle remain mostly steel, with additional features not yet being added.

Work continues on the Neverland mountains, with painting not yet underway on the three tallest.

Work on the attraction building’s structure seems to be otherwise complete, with most work now likely taking place inside.

Landscaping prep work appears to be underway for the corner between the hotel and the Pixie Hollow attraction.

The Jolly Roger’s painting looks to be mostly done, from our limited point of view at least. Looking further back into the “Tangled” area, it seems the first buildings inside the land are ready on the outside, with what we presume is The Snuggly Duckling mostly out of scaffolds and already show-ready on the exterior. Another building adjacent, possibly a shop, also looks to be ready and uncovered!

Rockwork on the mountains surrounding Rapunzel’s tower and flanking the exit is well underway, with the tops fully painted and out in the open.

Moving towards the “Frozen” area, we can see more love is still needed on these buildings.

The waterfall between the hotel, “Peter Pan,” and “Frozen” is starting to come out of covers, still grey despite its scaffolding coming down.

Work on the future entrance from Lost River Delta and Arabian Coast is harder to observe with the power generation building in the way, but it looks to be coming along nicely.

Are you excited to visit Fantasy Springs when it finally opens next year? Let us know in the comments below!