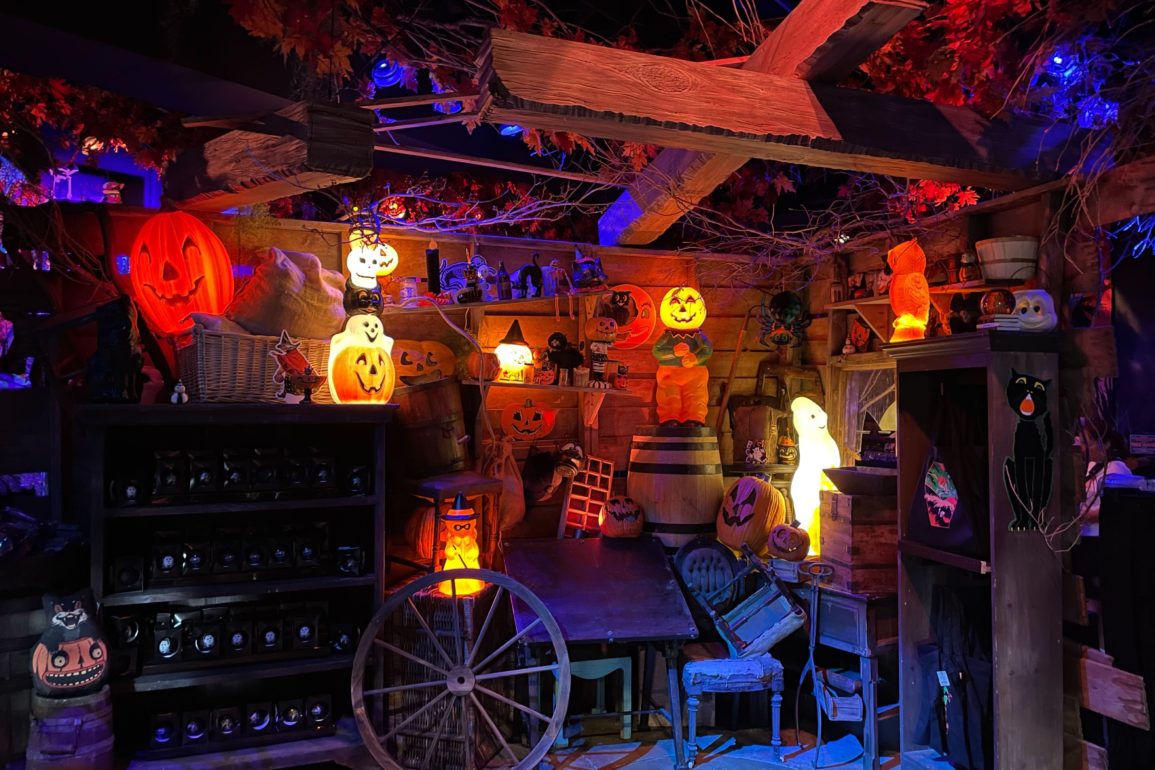 Classic Halloween decorations, like jack-o’-lanterns, light-up ghosts, and black cats, have been added to the wooden shelves and walls erected in All Hallows Eve Boutique earlier this week.

All Hallows Eve Boutique is in The Lost Continent at Universal’s Islands of Adventure. Pumpkins and other kitschy decorations now cover the shelves at the front of the store.

Two fake trees with autumn leaves and orange lantern string lights frame the shelves. Some papercrafts are stuck on the shelves too.

There are some flat wood decorations, like this stack of three pumpkins with black spiders on them.

A retro book of spells sits next to a haunted house snowglobe.

A large ghost holds a jack-o’-lantern with a black cat at its feet. A skull also sits atop this barrel.

Banners were added to the barrel later.

There are string lights with ghosts and jack-o’-lanterns. A tiny orange witch sits on this platform.

Pumpkins and a light-up ghost frame the back of the shelves, which are covered in similar decorations.

Further in the store, at the decrepit farmhouse set, several pumpkin figures light up the space.

Black cats and candle holders sit on one crooked shelf.

A black spider made of paper and cardboard hangs in the corner.

More decorations were added later, including an orange lantern covered in black cats.

Drawings of ghosts and other monsters now sit on this vintage desk.

On the other side, there are more spooky string lights made of skulls and ghosts.

The shelves here are also filled with pumpkins and other figures.

A few small skeletons can be found throughout the displays.

A set of “old witch fortune telling cards” is next to a heavy candlestick.

There’s a box for poison.

We spotted this creepy mask tucked away.

Through the broken window of the farmhouse, a glowing ghost with jack-o’-lanterns smiles.

This one features a ghost and skeleton in a cemetery.

A scarecrow with a pumpkin head smiles in this image.

This tapestry features a black cat popping out from behind a jack-o’-lantern.

And a witch leans over a bubbling cauldron on this wall.

According to Team Members, the update to All Hallows Eve Boutique is not complete, and we will see more new pieces added as we approach the Halloween season. Stay tuned for more photos.

Next
CONCEPT ART: Disneyland Dubai Was Planned to Include a Giant Castle, ‘Star Wars’ Tomorrowland, and Cars Land