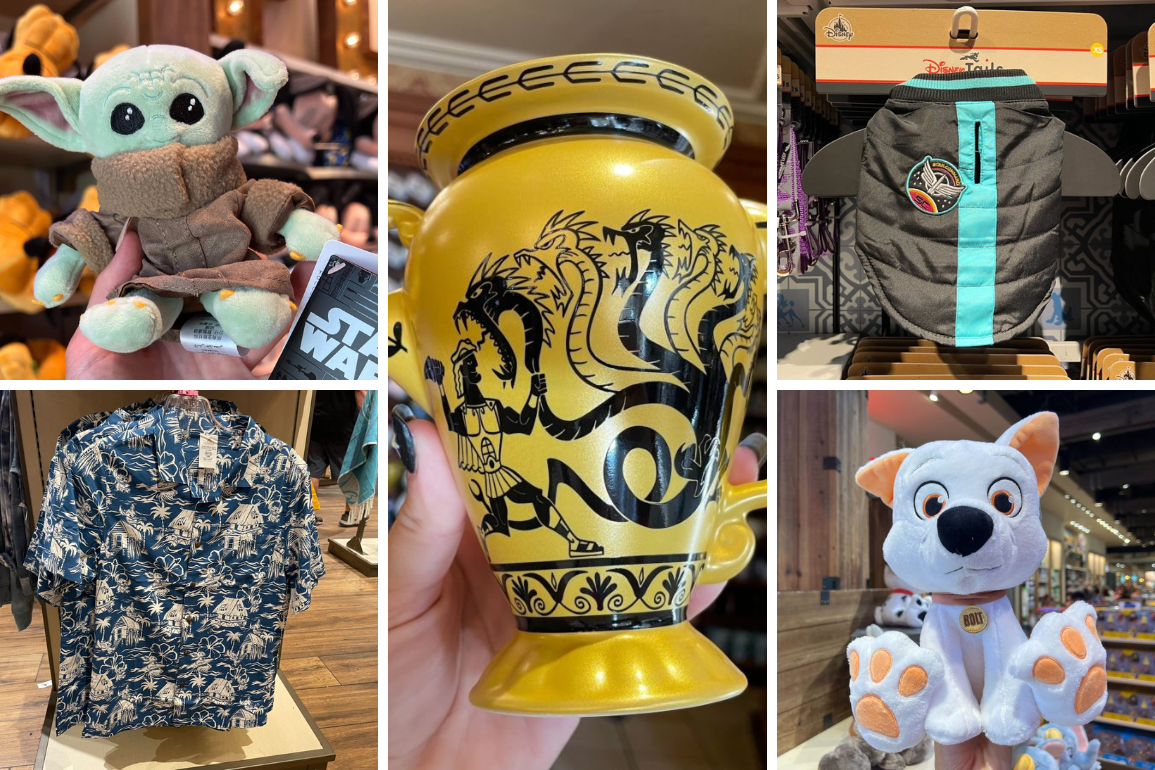 Welcome to the merchandise roundup for July 24, 2022! Each new day brings new merchandise to Walt Disney World, and we know you don’t want to miss a thing, so we gather new releases here. This week we visited Disney Springs, Magic Kingdom, EPCOT, and Disney’s Contemporary Resort; let’s look at our discoveries.

A new pet shirt is now available as part of the Disney Pride Collection.

The shirt comes in many different sizes.

A rainbow Mickey is on the front. The word “Love” is in black across him.

This and the vest below were in the DisneyTails section of Marketplace Co-Op at Disney Springs.

This puffy vest is black with a blue stripe down the back.

There’s a hole in the stripe for a leash to go through.

A Star Command patch is on the back.

It has velcro straps around the neck and chest.

The latest “Big Feet” plush is of Bolt, the eponymous white dog from Disney’s “Bolt.”

He has brown eyes and light pink ears.

His collar is brown with a soft golden tag.

His silver bolt is embroidered on his back.

This is a redesign of the Grogu “Baby Yoda” shoulder plush, first released in 2020.

We have to say; this version is cuter. Grogu is smiling, and his eyes have bright spots in them. He’s wearing his brown robe.

Plus, he “talks.” When you press on his belly, he makes squeaking sounds.

To use the shoulder plush, place the included magnetic pad under your shirt and then stick Grogu on top.

This and the “Star Wars” shirt below were also in World of Disney.

This shirt is tie-dyed grey and white.

The front features a sketched comic of a Stormtrooper playing fetch with an AT-AT.

These crocs are green, grey, and black camo patterned.

Each side has different charms. This side has a Mandalorian helmet and the show’s title in orange.

The other side has the Mythosaur skull, Din Djarin’s signet, the Star Wars logo, and Grogu.

This cup is inspired by the famous scene in which the two fairies fight over what color to make Aurora’s dress. “Make it pink! Make it blue!” is written in metallic foil on one side.

The other has the three fairies flying about.

The lid is pink, and the straw is blue.

The cup itself is a gradient of blue and pink.

We found this cute outfit at Disney Style!

The front of the shirt says, “Chip n’ Dale” in 70’s script. The chipmunks’ heads are just below.

The sleeves have purple and pink stripes.

The matching pants have a pink drawstring.

We found this magical ornament at Days of Christmas in Disney Springs.

It features Cinderella in her blue gown, running down the steps.

Her glass slipper sits abandoned on the steps behind her.

Cinderella’s sigil is on the other side of the stairs.

The blue string is attached to the rump of her dress.

Another ornament we found at Days of Christmas is inspired by “Ratatouille.”

Remy polishes off his famous dish with a bit of herbs.

“La Ratatouille” is on the side of the plate.

A gold medallion with the number “15” hangs from the string to celebrate 15 years since the movie’s release.

The cute Stitch water bottle was found at the Emporium in Magic Kingdom.

The side shows him surfing!

Below the designs of Stitch are various surfboards.

The top is blue and dark blue, just like Stitch!

This simple tee from the Emporium actually hides quite a few adorable scenes and sketches! Let’s dive in and take a closer look!

Stitch’s face is embroidered in blue on the breast.

The blue stripes wrap around the front and back.

The scenes hidden in the stripes are of Stitch surfing and using a paddle boat.

This flowery cookie jar is another find from the Emporium.

The cookie jar is in the shape of Winnie the Pooh.

The head can be removed to place cookies within.

The floral pattern is dotted with bees.

Along with the cookie jar, we spotted a cake stand at the Emporium!

Tigger waits underneath, ready to pounce.

The top of the stand reads, “Oh Tigger, where are your manners?”

We found this mug in a truly strange place, Star Traders! What did you expect? Wonderland?

Perhaps not as strange as wonderland, but this mug does have some unique features.

The Cheshire Cat will change color when hot water is added to the mug!

The sides are covered in “Alice in Wonderland” references, from talking flowers to spinning teacups and more.

The interior of the cup is a pale green.

This shirt is white with Minnie Mouse and pink tropical flowers on the front.

Minnie wears a pink flower in her hair, which matches her skirt and sandals.

This shirt and the Tommy Bahama dress below were in Plaza del Sol Caribe Bazaar (the Pirates of the Caribbean gift shop) alongside the new Jungle Cruise shirt.

The dress is patterned all over with green leaves, pink flowers, Mickey, Minnie, and Donald.

The characters are all wearing outfits perfect for the beach. Donald even has sunglasses.

The dress has a small keyhole back, with a white button.

You can grab this cute Minnie Mouse MagicBand from Pin Traders in EPCOT.

Four designs of Minnie Mouse repeat on the sides, two where she is side-eying you, another laughing, and the last with her eyes closed.

These cute towels can be purchased from the Festival Market Booth.

This towel shows an embroidered image of Minnie and Mickey making a toast and eating snacks in front of Spaceship Earth.

The other towel is a random pattern of Minnie and Mickey doing various cooking activities, like making a pizza and grilling!

We also found this apron at the Festival Market Booth.

It is charcoal grey with purple straps. The front reads, “Behold The Grill Master,” with an image of Mickey Mouse cooking some hot dogs.

Bless my soul! Herc is on a mug! They put his face on every vase — on every mug and amphora too!

One side shows Hercules posing while the other shows him fighting the Hydra.

The lip of the cup reads, “25th Anniversary.” One sip from this will bring you from zero to hero in no time.

This and the mug below were in the Emporium.

This mug resembles a blue beehive, with “Hunny” on the side.

The bees actually change color once a hot liquid is poured into the cup!

The interior is honey yellow.

This lovely ornament was found at Ye Olde Christmas Shoppe.

Inside the glass dome, Bambi and Faline stand proudly side by side as adults.

The gold medallion reminds us that 80 years have passed since this movie was released.

The rock on which they stand is covered in grass and blue cornflowers.

Guests can make a variety of new phone cases inspired by “Thor: Love and Thunder” and “Toy Story” in MaDe kiosks. The first of these cases is an image of King Valkyrie on her winged horse with “All Hail King Valkyrie” below. The second case is a print of Buzz, Woody, and other “Toy Story” characters in primary colors.

The next case is symbols and stamps from “Thor: Love and Thunder.”

The Mighty Thor gets her own red phone case and Mjolnir symbol.

The ordinary less-cool Thor also gets his own blue phone case with a Stormbreaker symbol.

All these cases can be made custom from any MaDe Kiosk.

Keep your kitchen clean with a Winnie the Pooh spoon rest from Bay View Gifts at Disney’s Contemporary Resort.

The wooden spoon holder shows a wood-burned Pooh hanging from a bunch of balloons.

This tie-dyed green and white hat features Buzz Lightyear taking off. You can purchase this cap from Fantasia Gifts.

A green border goes around the cap’s rim.

A Toy Story Land logo is attached to the side.

The bottom of the cap’s rim is bright yellow.

You can find this cute button-down at World of Disney in Disney Springs.

There is a pocket on the front, and the buttons are brown.

The design features Stitch relaxing outside Hawaiian homes and surfing on the ocean.

Look at Stitch playing the guitar in this image! So cute!

This plain black tee shows Zero from “The Nightmare Before Christmas.”

Above Zero are the words “Full of spirit” in orange. “Walt Disney World” is below.

This white mug shows Grumpy the Dwarf storming off with his nose up in the air. You can find this one at World of Disney as well.

The other side reads, “Nope.”

The top is a sealable reddish brown lid.

This lovely water bottle features one of the greatest Disney Princess carrying a plate of beignets. It can be found at World of Disney.

Around her are water lilies, trumpets, and more delicious food.

The other side shows Tiana and Naveen as frogs along with their friend Ray the Lightning Bug.

The lid is pink with a green strap and drinking straw.

These gray crocs can also be found at World of Disney. They are fairly simple and mute but overall pretty cute.

“Happy” is written in various colors over the front of the crocs. A lounging Mickey button sits on both sides.

The edges are a comforting shade of blue.

The bottoms are also gray.

This pin shows Woody leaning against the Toy Story Land sign atop a few building blocks.

This pin and the following three can all be found at Disney Pin Traders in Disney Springs.

This design is a bit more simple; the green alien is being picked up by The Claw. The top reads, “Toy Story Land.”

This pin is so green you can’t miss it! The toy soldiers want to play!

This pin is perfect for commemorating anyone’s first time on Slinky Dog Dash!