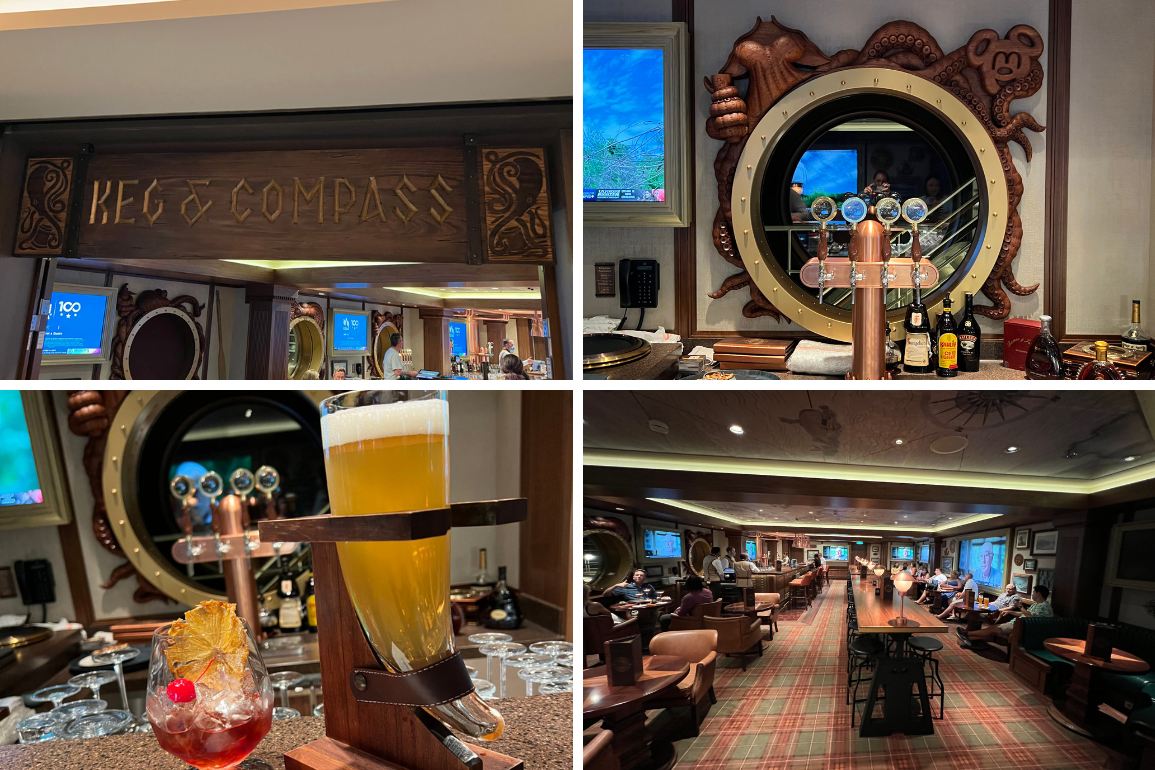 REVIEW: Embrace the Spirit of Norway and Drink from a Horn at the Keg & Compass Pub Aboard the Disney Wish

Welcome aboard the Disney Wish! We would like you to join us as we explore the Keg & Compass, a Nordic-style pub resembling a traditional sailor’s map room. We found little secrets on the ceiling, incredible woodwork, and of course — alcoholic beverages. Let’s dive in.

Watch your head as you enter beneath the wood sign decorated with carved octopi and rich lettering.

A beautiful oil painting of a ship at sea greets you near the entrance.

Fans of Maelstrom will recognize this small tribute to the extinct attraction. The sign reads, “You are not the first to pass this way, nor shall you be the last.”

The table beneath the bar’s counter is decorated with leather suitcase drawers. Treasures are most certainly being kept there.

Behind the tap is a golden porthole decorated with a wooden octopus. The clever sea creature holds a Mickey waffle in one tentacle and a chalice in another. Cheers!

A quiet nook in the corner holds an emerald green booth and several leather chairs.

A framed sketch of the Nordic ghosts from Haunted Mansion sits on the wall here.

One of the two portholes in the corner features two octopi sharing a Mickey premium bar.

The other porthole is surrounded by just one octopus, holding a DOLE whip in one of his tentacles.

Or perhaps it’s a Citrus Swirl!

The ceiling is also covered in a Searfarer’s Map of the World with tiny details and nods to beloved Disney movies.

The first of which we discovered was from “20,000 Leagues Under the Sea,” a classic movie from 1954. The image shows Ned atop the Nautilus, readying a harpoon at the sea monster.

The next is from a far more recent movie, “Moana,” featuring the volcanic Goddess, Te Kā. Each character is on the map in the location corresponding with the setting.

Welcome to the EAC, dudes! In this scene, we see Crush and Squirt showing Marlin and Dory how to ride the currents.

Here is Monstro from “Pinocchio.” Hopefully, you don’t run into him while on the high seas.

Ursula revels in (short-lived) victory over Triton and Ariel in this scene.

The worst pirate anyone has ever heard of — but hey, at least you’ve heard of him! — Captain Jack Sparrow steps off his sinking ship with a smirk on his face. So that’s where all the rum has gone!

Last but certainly not least, is the very location from which the Disney Wish set sail — Florida! Three locations are marked off on the map: Celebration, Lake Buena Vista, and Port Canaveral.

The framboise is the dominant flavor here, essentially making this a carbonated raspberry juice with alcohol. It’s less sweet and more tart, not nectary, sugary, or syrupy. It’s an excellent cocktail, probably the best at this location.

A fine bourbon with hints of clove and nutmeg, which makes it feel like a holiday season beverage. It’s good, but this may turn off more seasoned Old Fashioned drinkers, who would be better served by stopping at Hook’s Barbery for one between 5-8 p.m. nightly.

Despite the long list of ingredients, the lager is the dominant taste. The presentation can’t be beat as it is served in a giant glass horn. You can pick up the whole contraption to drink, or pull out the horn and sip if you are feeling adventurous.

Let us know what you think of the Keg & Compass in the comments below!

Check out a full photo and video tour of a deluxe family stateroom with a verandah on the Disney Wish.

Select Topiaries Shine at Night with Light-Up Features for the 2022 EPCOT International Flower &...March 2, 2022
New 'The Sword in the Stone,' 'Robin Hood,' 'Beauty and the Beast,' and 'The Lion King' Pins Debut a...April 14, 2022
REVIEW: Powdery New Sullust Buffalo Cheddar Chips for May the Fourth at DisneylandMay 3, 2022