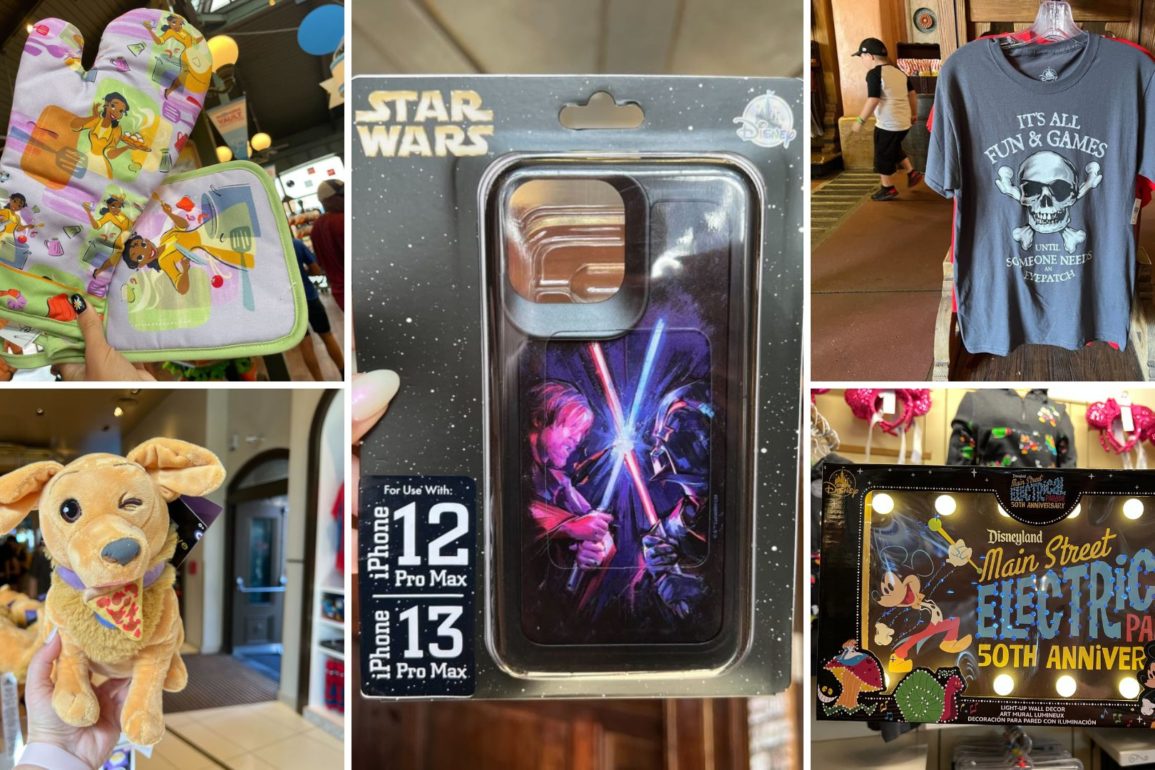 Welcome to the merchandise roundup for July 28, 2022! Each new day brings new merchandise to Walt Disney World, and we know you don’t want to miss a thing, so we gather new releases here. Today we visited Disney’s Hollywood Studios, Magic Kingdom, EPCOT, Disney Springs, and Disney’s Contemporary Resort; let’s look at our discoveries.

This case features Obi-Wan and Darth Vader battling with their lightsabers.

We found this case in the Darkroom at Disney’s Hollywood Studios.

It’s also available for customization in MaDe kiosks throughout Walt Disney World.

Marie from “The Aristocats” is featured on the front, along with pink roses.

The twelve posters are pictured on the back.

This was also in the Darkroom at Disney’s Hollywood Studios.

At Disney & Co., we found this blue drawstring backpack.

It’s patterned all over with images of Mickey lounging, eating ice cream, and leaning against his name.

It has a small zip pocket on the front.

Lucky the Pizza Dog, as seen in “Hawkeye” on Disney+, is now available in plush form.

He’s a one-eyed golden retriever who loves pizza. A slice of pizza hangs from the plush’s mouth.

The plush includes a purple collar with a “Lucky” tag.

Lucky was in Keystone Clothiers.

This planter features Stitch against a yellow polka-dot background. On one side, he’s pictured holding a coconut drink.

On the other side, he’s surfing.

The stoneware planter comes on a wood stand.

This was in Once Upon A Time at Disney’s Hollywood Studios.

This magnet features Thor wearing his golden and blue helmet, against a blue background.

All three of these “Thor: Love and Thunder” magnets were in Keystone Clothiers.

Mighty Thor is pictured with her helmet against a red background on this magnet.

This magnet reads “All hail King Valkyrie.” Above the words, Valkyrie flies on her winged horse.

We found this 50th anniversary shirt at Celebrity 5&10. It’s light pink, with darker pink Mickey heads and stars across it.

The golden silhouette of Cinderella Castle and “Walt Disney World” is on the left breast, with a “50” in the center.

It has a Toy Story Land tag on the sleeve.

This and the other Toy Story Land shirts below were in Mickey’s of Hollywood.

This shirt has a white torso and teal green sleeves.

The silhouettes of the main “Toy Story” characters stand among orange, yellow, and teal stripes across the front.

This youth tee is white with an all-over print of “Toy Story” characters.

Each character is pictured in one color. Rex is green, Buzz is orange, Woody is yellow, etc.

This tank is yellow tie-dye, with Bo Peep and her sheep on the front.

It reads “Hanging with my peeps.”

This shirt is pink with light yellow sleeves. It has an elastic waist.

Jessie, Woody, Buzz, and two green aliens are on the front. It reads “We’re all friends here.”

This tie-dye green sweatshirt features three of the aliens.

It reads “Take me to your leader!”

It has a large front pocket with the Toy Story Land logo.

It also has a hood.

Over at Magic Kingdom, we found these black shorts part of the Disney Pride Collection.

It has a black drawstring at the waist, the ends coming out of metal Mickey charms.

They are patterned with rainbow silhouettes of Mickey.

These were in the Emporium.

This black tumbler is patterned with shiny Mickey heads.

It has a translucent lid.

This and the mug below were both in the Emporium.

This stoneware tumbler mug resembles the poison apple from “Snow White and the Seven Dwarfs.”

It’s red with white “poison” dripping down from the top, forming a skeletal face.

It has a silicone lid.

The sign has the Disneyland logo, Main Street Electrical Parade logo, and “50th anniversary.” Mickey marches next to the words.

The bulbs around the edge of the sign light up. This was also in the Emporium.

This reversible table runner was available alongside other Stitch merchandise in Star Traders.

One side has yellow dots and two blue stripes down the center. Images of Stitch are along the edge.

The other side features a wave pattern, with Stitch and Angel surfing and boating in the water.

This dark gray shirt reads “It’s all fun & games until someone needs an eyepatch.”

A skull wearing an eyepatch is on the front.

This and the pirate merch below were in Plaza del Sol Caribe Bazaar.

Pirates of the Caribbean Toothpick Holder – $9.99

This ceramic toothpick holder is dark gray, with an elaborate Pirates of the Caribbean logo on one side.

The other side reads “Dead men tell no tales.”

These dark gray shorts are covered in images from the Pirates of the Caribbean attraction. They have a red drawstring.

There are pockets on the back.

This new Disney nuiMOs outfit is part of the Smile Collection.

It includes a faux straw hat.

There is a Hawaiian shirt and yellow t-shirt with a bee in the center. We found this in World of Disney at Disney Springs.

Also in World of Disney was this stoneware mug featuring Olaf swimming in summer.

The other side reads “Fun and friends and warm hugs.”

In DisneyStyle, we found this long-sleeved gray shirt.

It reads “More Mickey More Magic” above a large red and orange “M.” Mickey sits at the bottom of the design.

This new mystery pin collection was in Fantasia at Disney’s Contemporary Resort.

There are ten pins in the collection.

Each pin features a different Disney animal playing in fall leaves. The animals are Lucky (“One Hundred and One Dalmatians”), Marie (“The Aristocats”), Figaro (“Pinocchio”), Bruno (“Cinderella”), Simba (“The Lion King”), Tod, Copper (“The Fox and the Hound”), Stitch, Pluto, and Nana (“Peter Pan”).

This new pink v-neck was in Bayview Gifts.

It is bedazzled with “Walt Disney World 50” and Mickey.

The back is blank.

This set includes a standard oven mitt and a potholder mitt.

The potholder features Tiana with a pot of food.

It has green trim.

The inside and back are purple.

The oven mitt features multiple images of Tiana against a colorful background.

It also has green trim and purple fabric inside.

This and the apron below were in Port of Entry at EPCOT.

This apron is inspired by Tiana’s yellow waitress uniform.

It has an overlapping neckline with a ruffled collar.

The bottom is patterned with flowers.

It’s also lined with a ruffle.

A printed image of a spoon and spatula stick out of the pocket.

This pride mug was at Creations Shop in EPCOT.

It is shiny with a rainbow ombre. The Disney “D” is embossed on one side.

“Belong, believe, be proud” is in white on the other side with a Mickey head.

The inside is blue.

This small water bottle was also in Creations Shop.

It’s light blue with an image of Chip ‘n’ Dale on one side.

Dale has had a bit of a spill and is sitting with an ice cream cone on his head. Dale looks on while holding his own giant ice cream cone.

It has a silicone strap under the lid.

This “Cars”-themed candy is lemon and cherry-flavored.

We found these and the sour taffy candy below in Big Top Souvenirs at Magic Kingdom.

Inside are individually packaged taffy candies in strawberry, grape, and sour apple flavors.

We found the rest of this candy at ImageWorks in EPCOT.

The packaging for these gummy drops feature Joy from “Inside Out.”