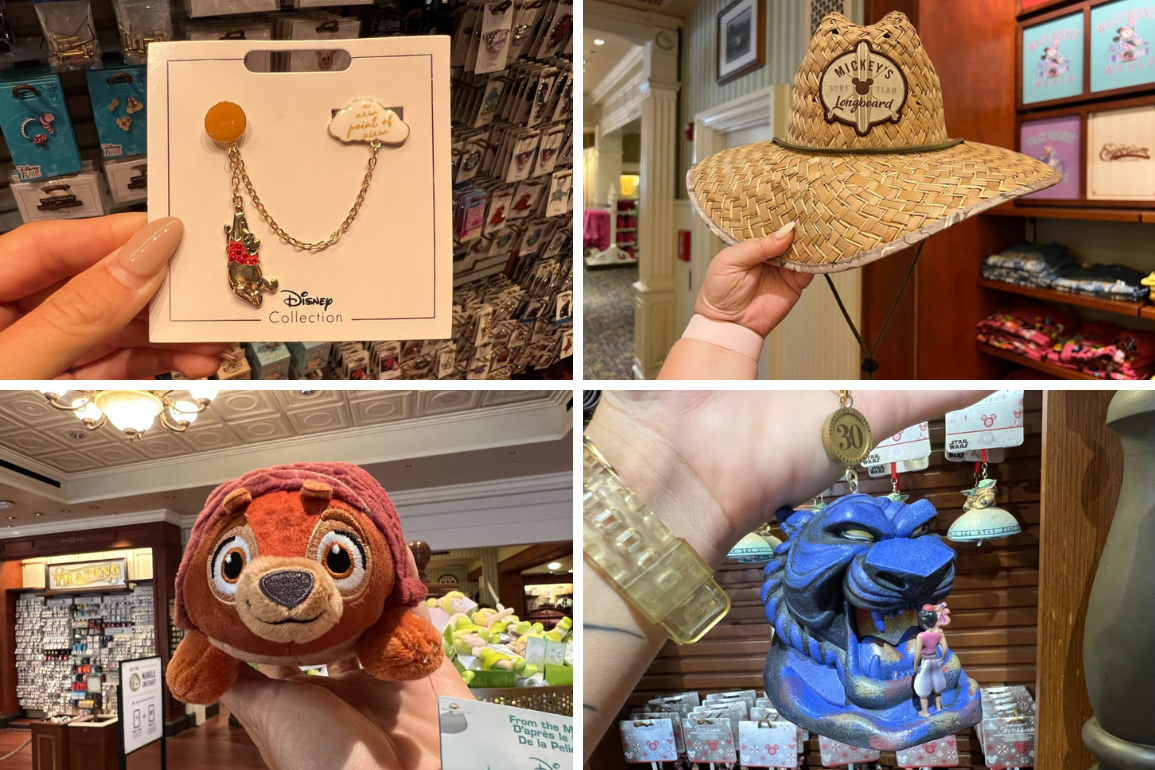 Welcome to the merchandise roundup for July 29, 2022! Each new day brings new merchandise to Walt Disney World, and we know you don’t want to miss a thing, so we gather new releases here. Today we visited Magic Kingdom, Disney’s Hollywood Studios, and Disney’s Contemporary Resort; let’s look at our discoveries.

This heather gray tee has blue on the neck and sleeve edges.

Also in the Emporium was this Minnie keychain and matching Mickey keychain (below).

Mickey is wearing his red shorts and yellow shoes.

A white glove giving a thumbs up hangs from the ring. A “28” charm hangs from his foot.

This v-neck is made from a jersey material and features the “Sensational Six”: Minnie, Pluto, Donald, Goofy, Mickey, and Daisy.

They are in black-and-white except for red accents and “Walt Disney World” is across the center.

This was also in the Emporium.

The pins in this set are connected with a golden chain.

Winnie the pooh hangs from a yellow balloon pin.

The chain connects to a white cloud reading “A new point of view.”

The cloud has a button back, while the balloon has a regular pin back.

Tuk Tuk is Raya’s loyal companion in “Raya and the Last Dragon.”

This plush represents Tuk Tuk in his baby form at the beginning of the film.

He attaches to your shirt with a magnetic pad.

This straw hat was also available in the Emporium.

A patch on the front advertises “MIckey’s Longboard Surf Team.”

It features a Mickey head and surfboard.

The underside of the brim is patterned with birds, palm trees, Mickey heads, and surfboards. It has an adjustable chin strap.

A new t-shirt has joined the Vault Collection in Main Street Cinema.

This ringer shirt is white, with a coral pink neckline and sleeve edges.

The retro Mickey globe in a “D” logo is on the left breast.

Cinderella Castle is on the back, also in coral pink.

This Sketchbook ornament has a green ribbon.

It features Baymax, in a Santa hat and green scarf, waving from inside a snow-covered chimney.

He holds a gift and the chimney is lined with Christmas lights.

The ornament lights up.

The battery pack and switch are on the bottom. This and the ornaments below were in Ye Olde Christmas Shoppe at Magic Kingdom.

Nemo is peeking out of an old diver’s helmet on this ornament.

The helmet sits on a bed of blue rocks.

In honor of the 30th anniversary of “Aladdin,” this ornament features a “30” gold medallion.

Aladdin stands in front of the entrance to the Cave of Wonders.

This pin is part of the Disney Arcade series. It resembles a pinball machine inspired by “A Bug’s Life.”

Over at Disney’s Hollywood Studios, we found this “Obi-Wan Kenobi” magnet.

It’s brown with “Kenobi” in orange letters. Obi-Wan’s silhouette is in front of Tatooine’s double suns, over the “o” of “Kenobi.” This was in the Darkroom.

At least one features Thor with lightning exploding behind him.

We found this pack in Keystone Clothiers.

This shirt is blue and features some of the main characters of “Star Wars.”

Each character has an descriptive word beneath them. Luke is “brave,” Yoda is “wise,” and Darth Vader is a “leader.”

We found this in Tatooine Traders.

MaDe kiosks throughout Walt Disney World have a new 3-D phone case.

It features Winnie the Pooh, “hunny” pots, and flowers.

This set has three scrunchies inspired by the outfits of Jessie, Woody, and Bo Peep.

The Jessie scrunchie is a cow print.

The Bo Peep scrunchie is blue with a pink bow.

The Woody scrunchie is blue and yellow. This set was in Jessie’s Trading Post.

Bambi is featured on this keychain, with a pink flower hanging from him.

There is also a butterfly charm and a charm of Thumper’s silhouette.

We found this in Bayview Gifts at Disney’s Contemporary Resort.