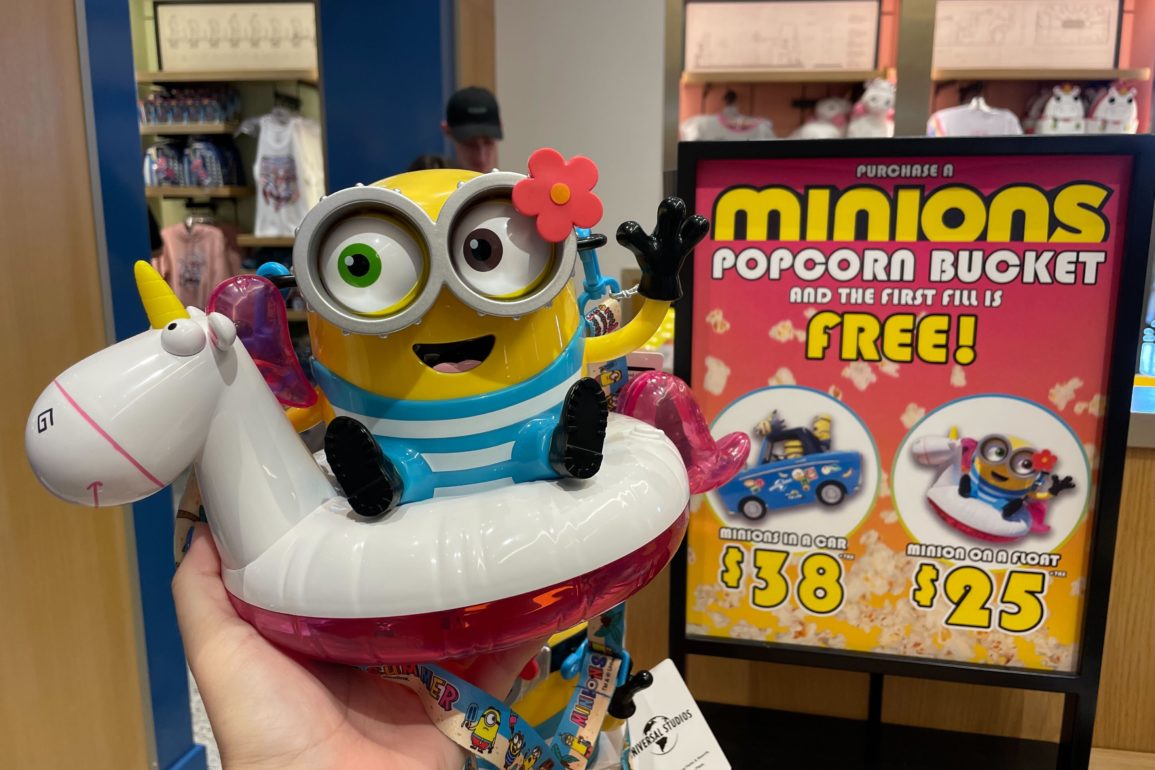 Welcome to another busy day here at the Universal Orlando Resort. We’re excited to see what’s new today, so let’s get going!

A new window display has been added to the Universal Studios Store in CityWalk. “Minions: Rise of Gru” is in theaters now.

Doesn’t look too busy this morning. This is a good sign. The holiday weekend was very quiet, too.

Another window display for “Minions: Rise of Gru” has been added to the front of Super Silly Stuff at the exit of Despicable Me: Minion Mayhem.

A brand new popcorn bucket is available. Celebration a Minions Summer with this adorable popcorn bucket of Bob in a fluffy unicorn pool float. Take a closer look in our post here.

A frame has been set up over the snack stand across from the Tonight Shop.

The lighting fixtures and awnings have been removed from the exterior of the former Monsters Cafe. The banners were recently removed, too, and we can hear work actively taking place behind the walls. Take a final look at Monsters Cafe in our post here and stay tuned for updates on what will take over this location!

Finally! The walls have been removed from the entrance of Revenge of the Mummy! The attraction has not yet reopened, but it’s moving in the right direction.

One sign that the attraction will definitely not be opening today is the exit is still blocked off. We can see some changes inside Sahara Traders, like the removal of the Phantom of the Opera. The ramps are still blocked off, so we’ll be watching and waiting for this area to be cleared out. Stay tuned for more updates.

Walls are up blocking off Delancey Street for cobblestone work. Since the Blues Brothers stage is blocked off, you can catch them performing next to the arcade just across the street.

More papers have been placed on the desk at the exit of the Tribute Store. We actually love the fact that they’re building up a backstory and some excitement for the Halloween Horror Nights Tribute Store.

It’s very quiet inside E.T.’s Toy Closet in KidZone. Both of the TVs have been removed, so without E.T. playing in the store, it feels really silent.

After making a very brief appearance, Umbridge is gone again. The unicycling Umbridge has disappeared from Weasleys’ Wizard Wheezes in Diagon Alley.

Inside the old Fear Factor theater, we can see lighting rigs installed for Halloween Horror Nights. Nightmare Fuel is rumored to return, but we’re still waiting for an official announcement.

We’ve spotted a few new Loungefly bags lately and now some older bags are being restocked. We haven’t seen this Hedwig bag in a while, but it’s back in stock at the Hello Kitty Shop.

It’s a beautiful day to be in the park.

No wait for the Hogwarts Express! It’s a walk on, so we’re going to hop aboard.

Islands of Adventure was pretty quiet today. Not too much was happening, but we did spot some progress on the refurbishments in Toon Lagoon. Comic Strip Cafe is closed right now, but we can see the pavement out front has gotten refreshed since our last visit.

A new Loungefly mini backpack and wallet have arrived for Doctor Strange and the Multiverse of Madness. We found them inside the Islands of Adventure Trading Company. Take a closer look at all the details in our post.

That’s all for this visit to the Universal Orlando Resort. Thanks for joining us around the parks today. Be sure to keep following Universal Parks News Today for all the latest updates!