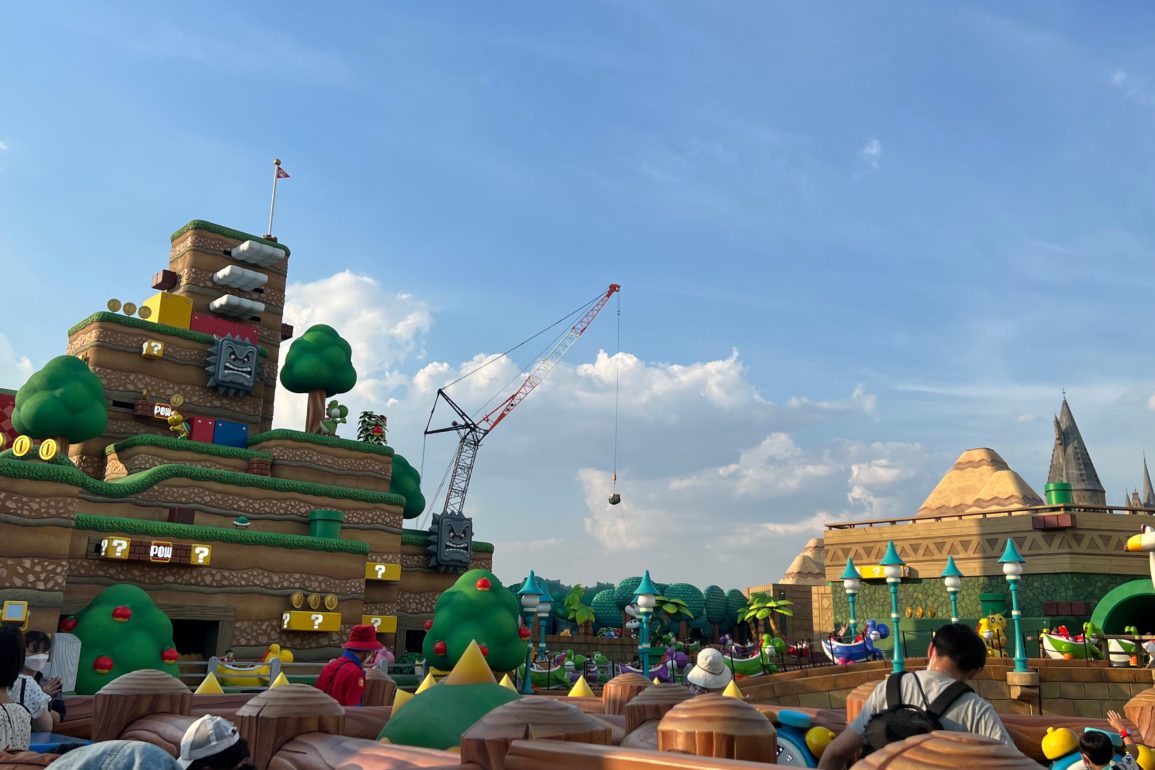 We’re finally back at Universal Studios Japan, just in time for the hot Osaka summer to kick off. There’s so much changing at the world’s most popular Universal park, so let’s head on in to check it out!

With the 20th Anniversary celebration officially over, the banners at the park entrance have switched from being entirely focused on Mario to adding the other characters at the park.

Mario, Yoshi, Peach, Bowser, and Toad still get banners of their own as they race on karts, representative of the still-new headliner Mario Kart: Koopa’s Challenge attraction.

On the flip side, we see Cookie Monster and Elmo from “Sesame Street,” whose characters make Universal Studios Japan their home in this country.

The second set of banners show Gunter and Rosita from “Sing” on the front. These two are part of Sing on Tour in the Hollywood area.

On the reverse, we have Charlie Brown and Snoopy from “Peanuts,” who take up a huge chunk of the Universal Wonderland area.

And on the third set of banners, we have the Minions on the front.

A new Mario medallion featuring a power star has taken over the opening day version we saw last year. New rainbow banners with the “No Limit!” slogan flank.

Universal Studios Japan is very excited about their new VIP Experience tours, and there’s a specific ticket window just for buying these along with Universal Express.

Because we’re in the slow period of summer, hours are still short — only 10:00 a.m. to 7:00 p.m. Most of what’s still closed has been for some time, but Jurassic Park: The Ride is a new addition. All we want is Terminator 2 3-D and Space Fantasy: The Ride back!

All physical distancing lines have been removed from around the park, including at the entrance. While the label scars still remain in most queues, the entry plaza is quite clean.

Imagine a theme park selling annual passes. Crazy, right? Not at Universal Studios Japan; in fact every turnstile advertises the ability to upgrade for a very reasonably low cost.

Huzzah, we’re in the park at last! Right at the entrance is the ticket window for buying seats at the annual One Piece Premiere Show, which began today. The line is crazy long, and the A-frame seems to indicate that tickets are already sold out.

Across the park, the former phone charging lockers have been replaced with battery rental stations operated by ChargeSPOT, similar to at Tokyo Disney Resort.

Guest Services also saw a refurbishment in previous months, with virtually all memorabilia previously present stripped away and put into storage. The new room lacks much of the former’s charm.

Over at Beverly Hills Gifts, the entire store has been taken over once again by “One Piece” merchandise, just in time for the show!

Universal Cool Japan 2022 also continues this summer, with the Cinema 4-D overtaken by “Sailor Moon: The Miracle 4-D Moon Palace Deluxe” (holy mouthful) in the morning, and “Hunter ⨯ Hunter: The Real 4D” in the afternoon.

Four anime series and one game are represented this year. From left to right — “Monster Hunter,” “Attack on Titan,” “Detective Conan” (or “Case Closed”), “Hunter ⨯ Hunter,” and “Sailor Moon.”

Speaking of, our beloved Space Fantasy: The Ride remains overlaid with “Attack on Titan: Race for Survival,” which returns from its inaugural run in 2020 that was cut short by the COVID-19 closure. It’s still just as “meh” as it was two years ago.

Although the sun and those ever-pesky LED screens make it hard to see, most of the wait times were pretty low across the board. Attack on Titan was about the only thing with a wait higher than 60 minutes.

With temperatures in the low 90s and humidity spiking, many shows ended up canceled. As compensation when a show is canceled due to weather conditions, Universal Studios Japan brings out the characters and dancers for each show under the canopy so guests can still take pictures with them.

With the 20th Anniversary celebration officially over, the No Limit! Market moniker has stayed in New York, but none of the trucks currently serve anything special. Rather disappointing, honestly.

As we trek all the way back to Jurassic Park, we see that just in time for Japan’s infamously hot and humid summers, Jurassic Park: The Ride is currently under one of its biannual refurbishments through mid-July. But that’s okay; you can enjoy a float through the ride on YouTube anyway.

Starting today, Universal Studios Japan is changing its nametags for the first time in nearly a decade. The former tag (seen above) is an oval shape, with the Universal Studios Japan logo at the top, a large all-caps English spelling of the Crew Member’s last name below, and their respective kanji in a smaller size at the bottom.

The new nametag is an oval with a hump on top, which holds the Universal Studios Japan logo. The Crew Member’s English spelling is now the same size as their kanji below. Crew Members told us this makes it simpler for the mostly-local audience to see people’s names.

Fossil Fuels has reopened in Jurassic Park to serve… “One Piece” food.

We did actually try the Helmsman Jinbe Ocean Blue Soda, and it was pretty good!

Decorations at Jurassic Outfitters are up to promote “Jurassic World: Dominion,” which doesn’t release in Japan until July 29.

A number of new merchandise items are available at the shop specifically for the new film too.

Looks like an errant guest forgot to remove all of their belongings before boarding The Flying Dinosaur, as we spotted a Power-Up Band atop the netting, which protects guests below from falling objects.

As we approach evening, Waterworld gets converted to the One Piece Premier Show 2022 space. This year features a new storyline which ties into the upcoming “One Piece Film: Red,” which releases next month in Japan.

Over in Super Nintendo World, we can catch a glimpse of construction progressing on the highly-anticipated Donkey Kong expansion to the already popular land.

Throughout our entire visit, the fun musical note blocks were sadly out of commission. Too bad, it’s still fun to play the secret songs and impress passersby.

We’re a bit rusty at Mario Kart after no practice for a couple of months; the best we could do is 210, while our personal high score is 224. Gotta practice more!

The highest score ever was both set and matched this week at 316. Impressive!

And that’s all the latest happenings at Universal Studios Japan. What did you think about the latest additions and changes? Are you ready to visit when Japan reopens? Let us know in the comments below!