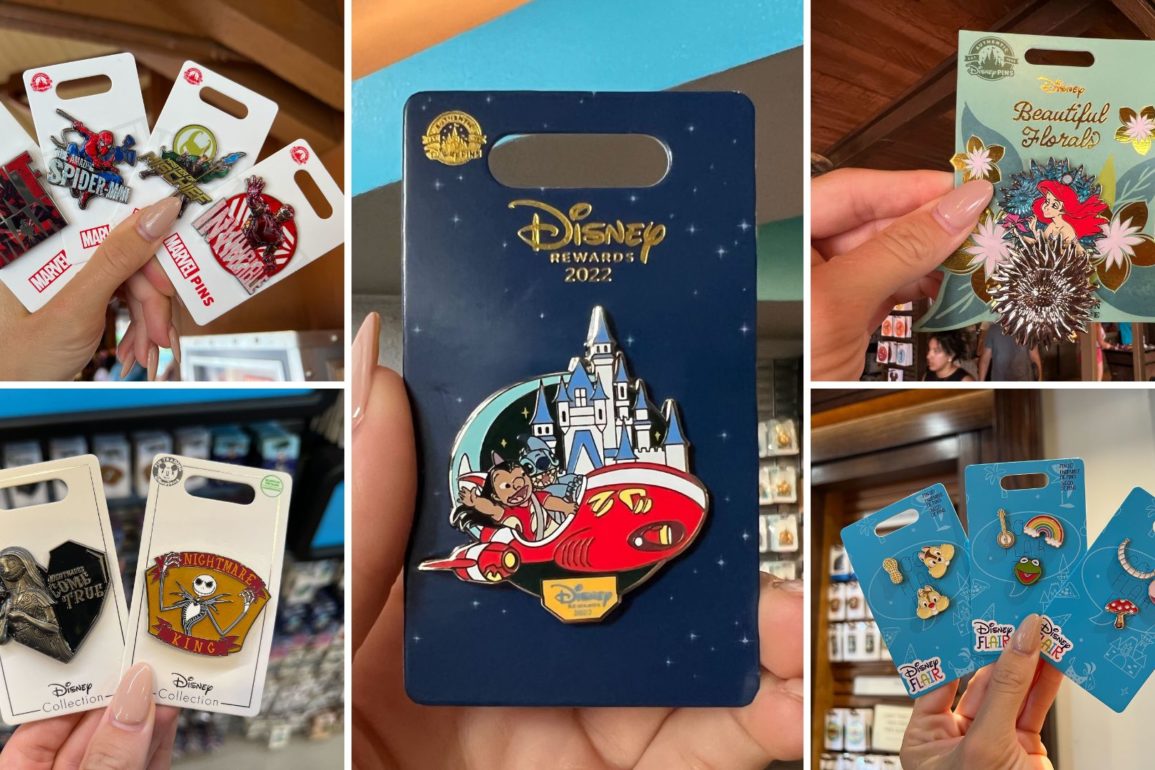 Several new pins have arrived at Walt Disney World this month, and we have a roundup of everything we’ve found.

This pin is part of the monthly “Floating Down Main Street, U.S.A.” set.

It features Peter Pan sitting cross-legged atop a hot air balloon. It has a limited edition size of 4,000. This and the two limited edition pins below were in Frontier Trading Post.

This is actually two pins connected by a chain. One resembles a teapot and the other a teacup on a saucer.

The set is inspired by Pocahontas’ brown outfit, with leaf accents and her necklace on the pot. This also has a limited edition size of 4,000.

This small set includes Maleficent on one pin and her raven sidekick Diablo on a second pin. It was in Sir Mickey’s at Magic Kingdom.

These three new pin sets are all part of the “Disney Flair” collection. Each set includes three small pins. We found them in The Darkroom at Disney’s Hollywood Studios. “The Muppets” set was also in Star Traders at Magic Kingdom.

The pins in this set are Kermit, a banjo, and a rainbow.

This set has Chip, Dale, and a peanut.

Two of these pins are the Cheshire Cat’s smile and tail. The third is a small mushroom.

This pin has a three-dimensional effect. On top is Grogu floating in his crib. The back layer is an image of Nevarro.

Another pin is a more cartoon-ish version of Grogu in his crib.

The third pin features the silhouette of the Mandalorian first meeting Grogu in his crib. Behind them is an orange sun with rays coming down.

This was at the Crossroads of the World in Disney’s Hollywood Studios.

One pin reads “Wild Child” around Grogu in his crib. The second pin features R2-D2 and Grogu hanging out.

These two open edition “Nightmare Before Christmas” pins were at Pin Traders in EPCOT.

Sally is sculpted in silver metal against a black heart on this pin.

Jack has his arms raised on this pin, which reads “Nightmare King.”

This pin glows in the dark.

This pin is a Disney Visa Card Member exclusive.

It features Lilo and Stitch in his red spaceship blasting off in front of a white and blue Disney castle.

It was also in Pin Traders at EPCOT.

This new mystery pin set features ghostly portraits of The Haunted Mansion characters. It was at Pin Traders in Disney Springs.

There are ten pins in the set.

Some of the featured characters are the Hatbox Ghost, the caretaker and his dog, Constance the bride, and the Hitchhiking Ghosts.

They are all in black and white.

Each pin features a hero (or a pair of heroes) with their name or a phrase associated with them and their symbol.

This pin just says “Ant-Man,” with the character pictured inside the words.

This pin says “The Amazing Spider-Man.”

“Master of Mischief” is over Loki.

This pin says “King of Wakanda.”

The Guardians of the Galaxy logo is in the background.

“The Sorcerer Supreme” is on this pin.

Which Walt Disney World pins will you be collecting? Let us know in the comments.