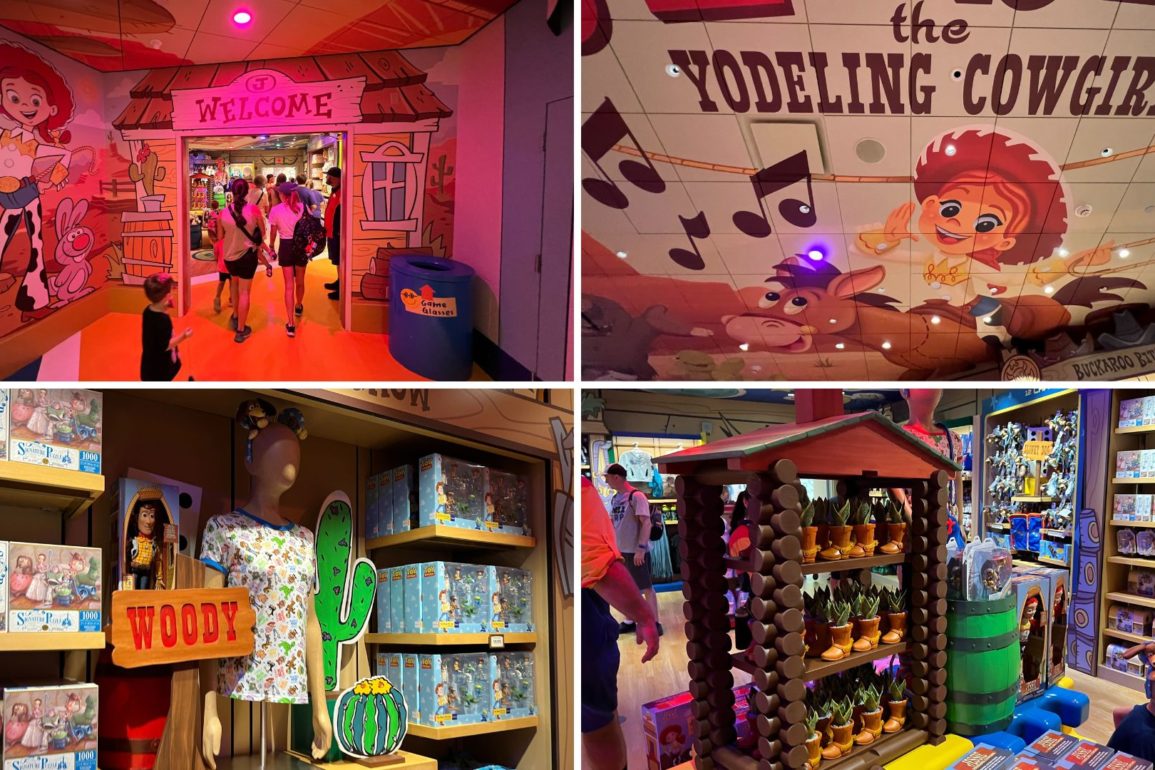 Guests exiting Toy Story Mania walk through an updated hallway to a mural of Jessie at the front of her shop. Like much of Toy Story Land, it is themed like Jessie’s Trading Post is a toy set with “22 pcs included.”

The exit queue has been reworked so guests must walk through the gift shop to exit.

Cast Members told us that the toys helped set up Jessie’s Trading Post in Andy’s attic.

Jessie and Bullseye are on a record case on the ceiling.

It reads “Sing-Along with Jessie the Yodeling Cowgirl.”

A giant record pokes out of the side.

A price sticker from Al’s Toy Barn is on the ceiling near the front door.

In the corner of the ceiling is a drawing of Buzz.

There’s a cosmic sticker pack on the ceiling too.

There are stickers of the green aliens and other space objects.

The floor has a wood finish, with the occasional star or faux-money token.

There are four merchandise units on the floor.

One large merchandise display looks like it is made of giant building toys, including a Lincoln Log house.

There are barrels full of toys.

The other units look like they were popped out of a cardboard play set.

These ear headband stands look like rolled up twine.

A set of shelves on the wall is labeled “Critter Chow” and features some cartoon critters on top.

There’s a cartoon cactus in the center and a “Woody” sign.

The next set of shelves looks like a blue crayon box.

This shelving unit has flat images of “Prospectin’ Supplies,” like a shovel and lantern.

“Rex” is spelled out with Scrabble tiles amid Rex toys.

There’s a “hand-drawn” alien spaceship on this shelving unit.

This unit is for “Buckaroo Bits & Bobs.”

It has flat cowboy hats on top.

This unit is another crayons box, with a “Buzz” sign inside.

In the corner, Scrabble tiles spell out “Andy” and “Toys” on top of more shelving units.

More ear headbands are on display stands that look similar to the targets you shoot on Toy Story Mania.

There are giant toy soldiers and dominos among the displays.

“Trailblazin’ Tack” is near the exit.

There are flat horseshoes, carrots, and a brush.

There is an orange refreshments fridge near the checkout counter.

The back wall of the check-out area looks like a giant cash register toy featuring Hamm. A sticker of the Pixar ball is on the bank.

Images on the wall look like a cartoon frontier shop.

The beaver prize from Toy Storia Mania is the employee of the month.

There’s a flat chair and furnace on this wall.

The check-out counter has a Mr. Potato Head sticker on it.

A Pizza Planet-branded ruler is on the unit next to the exit.

The exit leads out to the same old Woody mural.

Watch our video tour below.

Are you excited to visit Jessie’s Trading Post in Toy Story Land? Let us know in the comments!