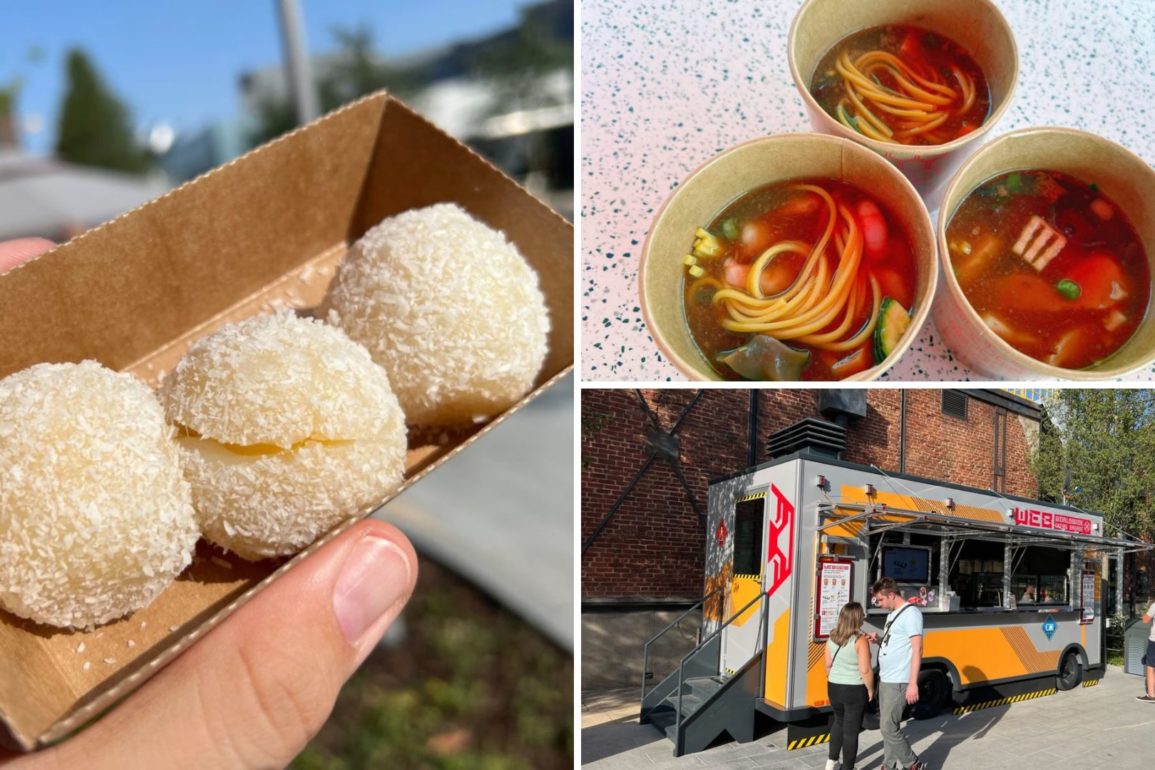 REVIEW: We Tried Everything From the Worldwide Eating Brigade (W.E.B.) Food Truck in Avengers Campus at Disneyland Paris

Other than the two main restaurants, Stark Factory and PYM Kitchen, Avengers Campus at Walt Disney Studios Park has a handful of small venues as well. We stopped by the Worldwide Eating Brigade (W.E.B.) Food Truck to try out the menu.

The truck is yellow and silver, with a small awning over the windows.

There are canisters labeled “soda formula” and “power formula” on the side.

This menu is full of “Food to unlock your superpowers!” It includes three different noodle cups (called “noodle chow x-perience”), and coco balls or a mango cup for dessert. There are also standard ice cream, soda, and coffee offerings. A note at the bottom reads “Experiments are still in progress. Superpowers not yet 100% guaranteed.”

The noodles come in brown cups with a red hexagon pattern. The W.E.B. spider logo is in some of the hexagons.

The grilled chicken pieces were of good size and quality. The actual noodles, unfortunately, are too thick and chewy. The mushrooms had an awful, undercooked consistency.

The vegetables in all the cups are cut into fun shapes and letters, so you can spell out “W.E.B.”

The broth is salty, with a bit of ginger on the backend, but was mostly tasteless. The chicken couldn’t save this dish.

The shrimp were a little fishy and chewy but mostly fine.

Everything else was just as flavorless and undercooked as in the first cup.

The tofu was fine, though didn’t have much flavor beyond smokiness, which was a bit weird.

Again, the rest of the cup was no good.

These were served warm but with a mochi-like consistency. That said, it was unlike anything else we’ve ever had.

The exterior is like a raw dough covered in coconut, wrapped around a sweet egg yolk. The egg and coconut were nice, but the doughy shell was more like wet cardboard.

The Worldwide Eating Brigade truck was a bizarre and disappointing experience. Our overall recommendation is to just not eat here. If you’re looking for fun Avengers Campus food, go to PYM Kitchen instead.