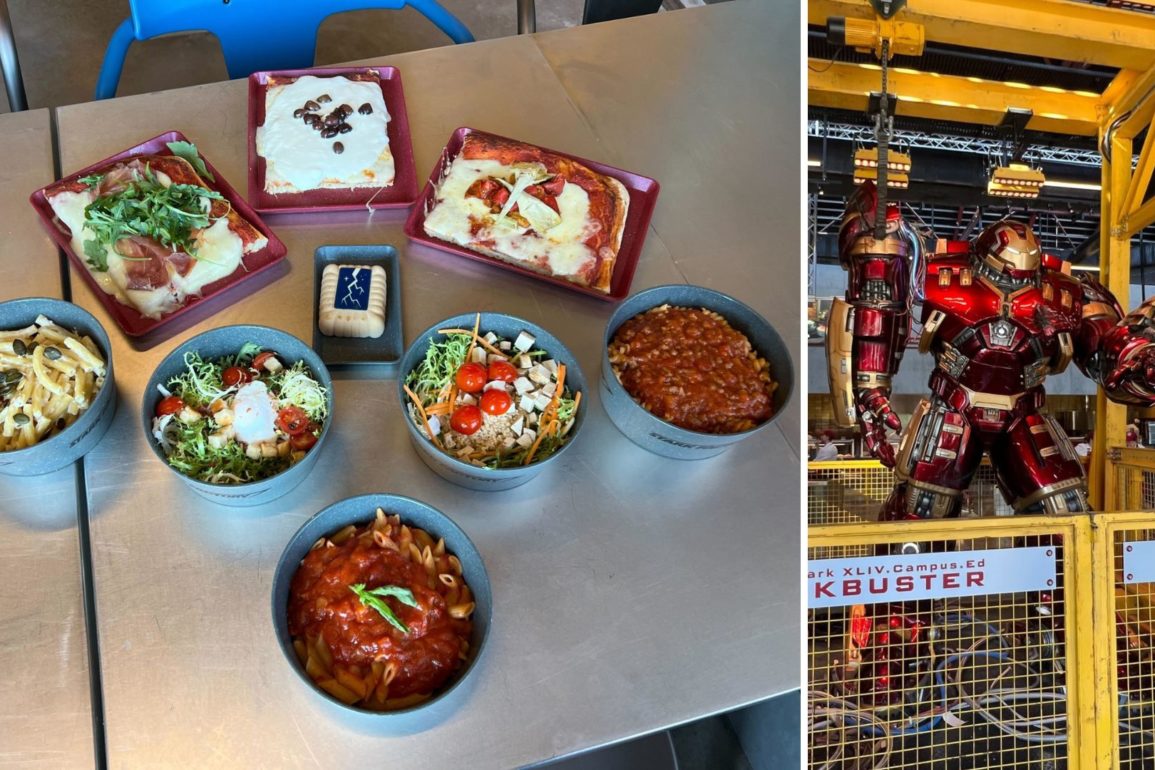 REVIEW: We Tried Everything on the Menu From Stark Factory in Avengers Campus at Walt Disney Studios Park

We were lucky enough to snag an Annual Passholder preview to Avengers Campus at Walt Disney Studios Park, and we’ve got a full menu review of the Stark Factory restaurant for you.

There is seating outside, but it’s just a simple patio looking out at the rest of Avengers Campus.

The interior is much more interesting. The centerpiece of the factory dining room is the Hulkbuster.

It sits in front of the counters, contained in a yellow framework.

Tony Stark didn’t clean the Hulkbuster up for display — it has scratches and dents.

There’s even some exposed wiring.

The rest of this main room has mostly grey walls and furniture.

There are some full of various weapons and costume pieces. The logo on the wall is for AccuTech Research & Development. AccuTech is a subsidiary of Stark Industries that used to be part of the weapons division before Tony moved the company away from the arms industry.

This cage is labeled “melee weapons” and has Black Widow’s white suit and electric batons.

This one features a Black Panther costume. The vials appear to hold vibranium fragments.

The soda fountains weren’t available during previews, so were covered in a Stark Factory-branded tarp. We got bottled soda instead.

This cage is packed with electronic components.

There are “specialized projectiles” in this cage.

The base of a robotic Iron Man is in this cage with several tool boxes.

One wall features blueprints for the Iron Wing, which is from the Iron Man Experience at Hong Kong Disneyland.

This blueprint has classified and declassified stamps. It’s for Captain America’s shield.

Another schematic depicts the arc reactor.

Short stairs lead up to another section of dining tables.

Through some sliding doors is another dining room resembling the SSR office.

A note on the doors reads:

This is the “secret room” I was talking about.

Figure you should get to decide what to do with it.

It has green walls, with wood paneling along the bottom. There are maps, blueprints, and shelving on the walls.

In one corner is Peggy Carter’s desk and Howard Stark’s Captain America collection.

Guests can dine at a counter around Peggy’s desk.

It has a nameplate for Peggy.

There are even stamps.

Photos of Peggy, Steve, and more characters hang on the wall.

There’s even a photo of Edwin Jarvis.

Peggy’s red hat hangs on the wall, next to Cap’s original shield.

The weathered shield is in a display case.

Captain America’s original blue helmet and goggles are also in a display box.

The helmet sits atop one of two filing cabinets. Some of these drawers are labeled “H. Stark inventions” and “H. Stark research.”

There are more drawers for Vibranium and Tesseract test studies. The bottom two drawers are for “Paperclip candidates.” Within the Marvel universe, Operation Paperclip was a project for recruiting Nazi scientists, including Arnim Zola, to S.H.I.E.L.D.

One of the drawers on this cabinet is labeled “CA, USA Time anomaly,” maybe a reference to the Ancient Sanctum at Avengers Campus in Disney California Adventure, which doesn’t exist in the Disneyland Paris version. There are case archives for Red Skull and his plane, the Valkyrie. There’s a drawer at the bottom for Camp Lehigh, where Steve Rogers trained. The rest of the drawers are simply labeled “SSR archives” A-Z and “Paris lab projects.”

A third dining room has brick walls and metal tables.

The SSR logo is painted on one wall.

There are various safety signs. This one reminds personnel that they must report to Agent Carter before using the nearby test chamber.

This sign reminds employees to wear eye protection. The signs use both French and English. The bottom reads, “Don’t look directly at the Vita Rays.”

Stark Factory is quick-service “buffeteria” style, meaning you go down a line, grab your food, and then pay at the end.

The dressing is provided on the side. It’s necessary but also a little overpowering. The salad is fine, and everything tastes fresh.

That said, an American in Paris probably wouldn’t love this type of salad.

There are more flavors in this salad, and we prefer it to the Refuel Bowl. There’s a light soy vinaigrette already on it, but we still had to add the dressing.

Ultimately, we wouldn’t choose to get a salad here.

The side salad is just a simplified, smaller version of the salads above.

Arugula is also known as rocket in Europe, so the “rocket salad” is the arugula on top. One of these pizzas is a bit larger than a standard pizza slice, so it can theoretically be picked up. Or you can eat it with a fork and knife.

This is fine, especially compared to other Disneyland Paris pizza options. The cheese is rich and thick with great flavor. The ham is of great quality and brings some saltiness. The red sauce is fine. The crust is doughty with a crispy bottom.

This has the same rich mozzarella cheese atop a relatively mediocre pizza. When taking a bite with an olive, the olive is the dominant flavor.

This was fine enough, but we prefer the ham pizza.

The artichoke is excellent and the peppers have a great roasted flavor.

This was very rubbery. The sauce was thick and pasty. Flavor-wise, it’s fine, but we wouldn’t recommend it.

The pasta in this dish was the opposite of the macaroni. It was soft and melt-in-your-mouth, which isn’t a bad thing.

For fast food bolognese sauce, this isn’t bad. We got hints of the seasoned beef, and the tomato wasn’t overpowering. This is an okay option.

This was the best of the pasta dishes. The sauce was a little better than a canned sauce. It had onion and tomato flavors.

The pasta is well-cooked, not too chewy, and not disintegrating. This was good, whether you’re vegan or not. And if you are vegan, this may be the best option in the park.

This Norwegian-inspired dessert is said to be Thor’s favorite. It has a blue and white thunderbolt piece on top. Though it may look solid, this cake is soft like a mousse or a pudding.

It’s sweet, but not too sweet. There’s a light milk chocolate flavor, followed by the caramel, but neither is overpowering or too rich.

This is good. We wouldn’t mind stopping at Stark Factory again for a soda and this cake as a snack.

The interior theming of Stark Factory is great, but the food isn’t. Not to mention, none of the food is themed except the Thor dessert, which has nothing to do with Tony Stark or a factory. The food is better than several other counter-service restaurants at Disneyland Paris, but still not the best.