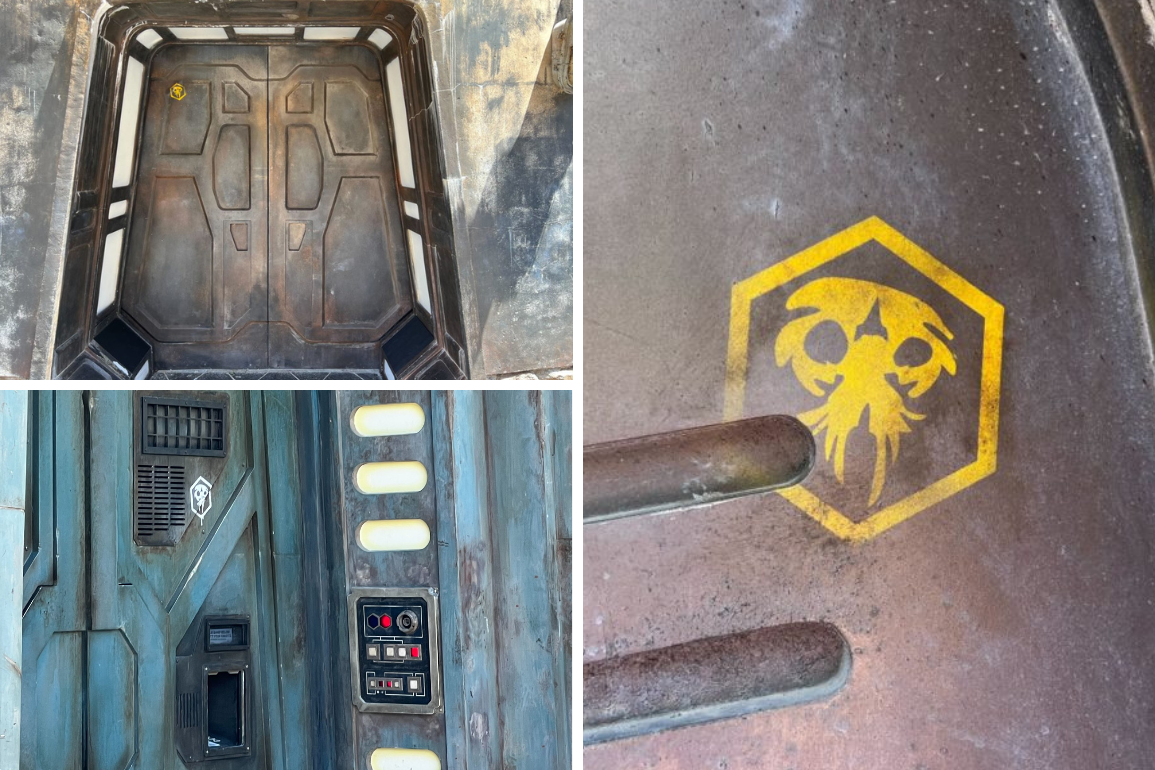 When the MagicBand+ debuts later this summer at Walt Disney World, a new Star Wars game will be one of the features. Over in Black Spire Outpost, we’ve been watching progress on the game station where guests will pick up jobs for the Batuu Bounty Hunters Guild. On our visit today, we spotted symbols left behind by guild members across the outpost, which mark locations key to your missions.

To play, you will have to purchase a MagicBand+. They are not on sale yet, but we were able to purchase a few due to an accidental early release. Take a look here to see how they work and stay tuned for more information on an official release date.

The game station is located near the edge of the Land Port at Black Spire Station, the building connected to the catwalk and junkyard area where characters often are spotted. (We wonder how Salju feels about a bounty hunter guild using her garage as headquarters).

When you arrive, you’ll use your MagicBand+ at the tap point on the game station, otherwise known as the job board. You’ll be able to see the available bounties, what they are wanted for, and how many galactic credits they are worth. Once you select one, your MagicBand+ will serve as a tracker.

Much like how the tracker used by Din Djarin in “The Mandalorian” flashes faster as he approaches a target, your MagicBand+ will do the same thing. It functions similarly to playing “hot and cold.” The bounty screen on your band will turn green if you’re headed in the right direction in addition to increasing in frequency. The lights will be red if you need to turn around.

The band will lead you to one of the many buildings around Black Spire Outpost. Once you’ve arrived, it’ll be time to use the Datapad on the Play Disney Parks app to active your thermal scanner. You’ll scan around the door to see if your bounty is inside. Since you are not a seasoned bounty hunter, your only job is to find the target, not apprehend them.

So far, we found 12 doors tagged with the Bounty Hunters Guild symbol. These will be the locations where you will search for the bounties.

The first few were spotted at the entrance to the Black Spire Market. In the photo above, it’s the door on the left-hand side.

This “vendors only” door has been tagged with the mark of the guild.

The symbol is the same throughout the land, showing the yellow skull in a spray paint-style design.

Nearby, around the corner from The Wooden Wookie, are two more. They are on opposite sides of the archway that leads to the stairs.

Both doors are marked “authorized personnel only” and have been tagged by the guild.

This one is on the right-hand side if you are descending the stairs.

The other is just across the hall.

To the right-hand side of the market refreshers (bathrooms) is another tagged door.

There are two tagged doors in Merchant Row on the back of Dok-Ondar’s Den of Antiquities.

They are close together. There is a symbol on each door pictured above.

Here’s the door on the left.

And the “Fire Riser” door on the right.

This one is on a door that looks much different than the others. In the photo above, it’s the door covered in pipes and meters on the right-hand side.

It looks like a pretty good hiding spot for a bounty.

Its door now has a Batuu Bounty Hunters guild mark.

This door is to the right of the Bubo Wamba Milk Stand.

There are two here. These are both located on either side of the service yard behind Droid Depot, near the refreshers (bathrooms).

And here is the location of the second door in the service yard.

When you have successfully located your bounty, you’ll return to the Black Spire Service Station. There’s a door to the right of the job board.

It has a unique white guild marking. This is where you will meet the guild leader and collect your reward.

You will place your wrist/MagicBand+ into the slot seen above. It will work like a tap point and receive the information you collected.

The gated window will open so you can see the eyes of the guild leader, who will communicate with you and add the galactic credits you have earned to your datapad.

Are you excited to try out Batuu Bounty Hunters? Stay tuned to WDWNT for full coverage when the game launches later this year.

Previous
REVIEW: We Tried Everything on the Menu From Stark Factory in Avengers Campus at Walt Disney Studios Park

Next
Dedication Plaque Added to Guardians of the Galaxy: Cosmic Rewind at EPCOT