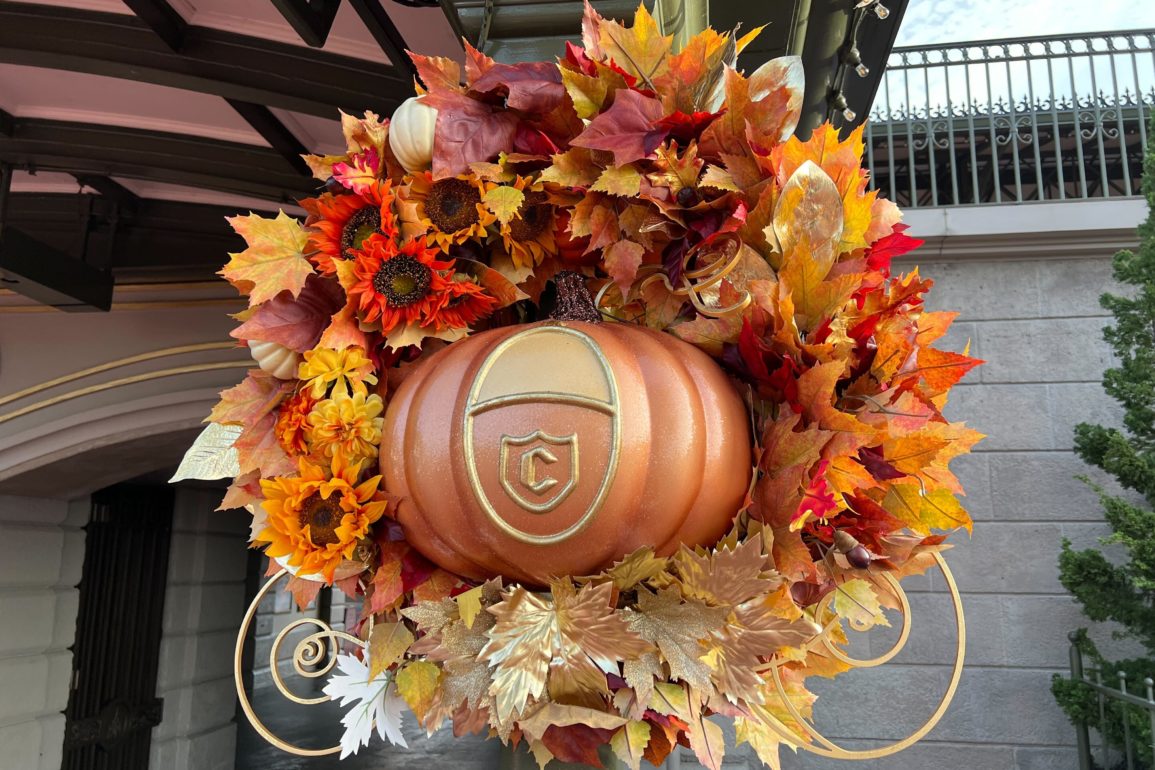 50th Anniversary Pumpkin Wreaths Are Out on Main Street, U.S.A. for Halloween at Magic Kingdom

With the start of Mickey’s Not-So-Scary Halloween Party just days away, the Magic Kingdom is nearly ready for the spooky season with the arrival of more seasonal wreaths.

The pumpkin wreaths have returned, but this year, there’s a glaring absence of Mickey Mouse.

The 50th anniversary Cinderella’s Carriage wreaths have returned in greater number. Last year, the Cinderella pumpkins were confined to the Hub while Main Street, U.S.A. had classic Mickey pumpkins.

This year, however, there are no Mickey pumpkins. Cinderella’s Carriage wreaths line the Hub and Main Street.

Meanwhile, bunting has also been hung along Main Street from City Hall all the way down to the Hub.

These red, gold, and orange banners compliment the wreaths hung in the archways below.

The collection extends to the roof of the Emporium, which keeps the banners close together.

At the entrance to Disney Clothiers, the bunting can be seen on all three “stories” of the building.

The look is unified throughout the land, as seen at the Plaza Restaurant and Plaza Ice Cream Parlor.

Banner… I mean, batter up! Casey’s Corner looks ready for a fall classic with the bunting hung from the entrance.

The bunting can also be seen on the side of the building facing the Hub.

Heading into the Hub, the carriage wreaths have been hung from most lampposts.

The pumpkin coach is surrounded by a circle of autumn leaves and miniature pumpkins.

Meanwhile, the planters have become home to a display of colorful pumpkins both big and small

In the planters just to the right of Cinderella Castle, a large, orange pumpkin evokes the origins of the princess’s coach.

Heading towards Liberty Square, we can see the same carriage wreaths.

Meanwhile, the lampposts in Liberty Square have been adorned with wreaths featuring autumnal gourds.

A neat part about these wreaths are that no two are exactly the same. Some have been decorated with pumpkins, while others have squashes, each with a slightly different coloration or arrangement.

Each is complimented with an array of fall leaves.

It’s a great thematic touch, reflecting the pre-industrial aesthetic of the land.

Over at Liberty Square Market, long garlands have been hung from the ceiling.

They wrap around the stand, though they do break briefly at the corners.

The pumpkins are also prevalent on the garland, accompanied by leaves, twigs, and golden ribbons.

Deeper into the land, circular wreaths have been hung from the windows of the Ticket Office.

Red, gold, and green leaves are featured, along with pinecones, berries, and a small gourd.

A floral garland has been added to the doorway facing the exit to the Hall of Presidents.

Inside, a smaller garland hangs above the doorway.

The ribbon in the middle features two children pulling a wishbone, a sight typically associated with another fall holiday, Thanksgiving.

Sleepy Hollow is also decked out for the season.

Garlands of leaves, berries, and pumpkins can be seen on the overhang that juts out from the building.

Much like Liberty Square Market, the garland wraps around the building.

A similar garland hangs from the roof of the covered portion of the seating area nearby.

As the official kickoff to Halloween celebrations draws near, the park is looking right for the changing seasons.