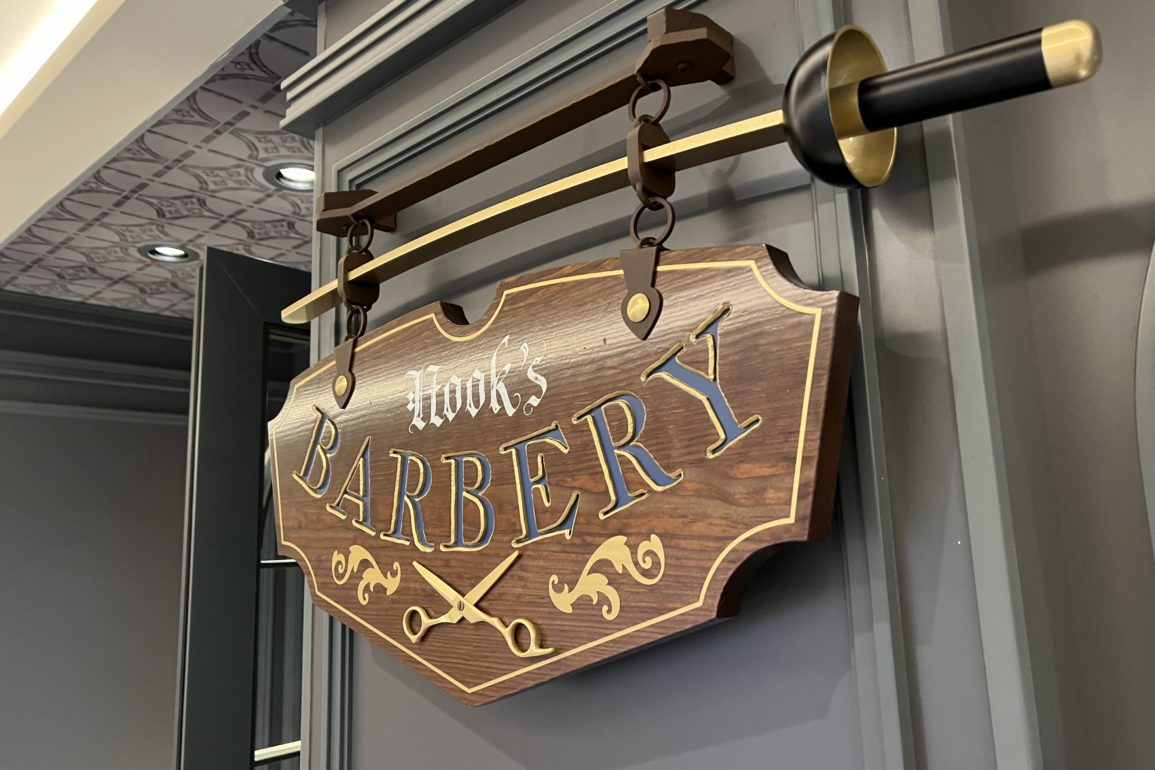 Putting the "Bar" in "Barbery"

Say what you want about Captain Hook, but the man was well groomed. His mustache was always on point, and his randomly appearing 5 o’clock shadow was always dealt with quickly and professionally. Aboard the Disney Wish, you can learn his grooming tricks and skincare routine in a salon inspired by his private quarters aboard the Jolly Roger, Hook’s Barbery. Perhaps a youth spent hearing about the exploits of Barbary pirates inspired him to pursue two parallel careers, and nobody had the heart to point out the spelling differences. At any rate, Hook’s Barbery is a jewel aboard the Disney Wish, and we went there for the full experience. Beards, barbers, and secret bar, this small enclave has it all, even if its logistics are a bit tricky.

Aboard the Wish, Senses Spa and Salon has extended its reach beyond their normal footprint, and some of their services, such as shaves, haircuts, manicures, and pedicures, are provided at Hook’s Barbery and Untangled Salon, both on Deck 4. It’s important to note that as of our sailing, reservations for Hook’s Barbery and Untangled Salon cannot be made at those locations and need to be made at the main desk of Senses on Deck 5.

The decor of the Barbery is decidedly old school. Disney’s description for Hook’s Barbery reads:

“A calm refuge tucked away from Senses Spa, Hook’s Barbery is designed for the utmost in relaxation—featuring heavy leather chairs, dark wood tones and deep grays, and drapery evoking Captain Hook’s own style. During treatments and special evening events, this European-style barbery invites Guests 21 and older to unwind even further at our hidden bar offering specialty whiskey tastings.”

We entered the Barbery as salty scallywags, desperately in need of expert grooming if we were ever to reach “dashing swashbuckler” status. My fellow traveler, our own Tom Corless, and I both opted for the ELEMIS Pro-Collagen Grooming Treatment with Shave for $109, plus gratuity. We also opted for some basic haircuts for $45. The combined experience was estimated to take about an hour and 15 minutes. Curiously, we were handed elaborate forms to fill out, similar to something you would fill out at a doctor, which asked for, among other things, your occupation and typical skincare routine. As my skincare routine typically involves forgetting to put on sunscreen and accidentally having shampoo run down my face in the shower, I just put “N/A.”  It’s unclear if this answer impacted the services they were to provide or if Big Data just wanted to know my secrets. They even offer teeth whitening, which, according to every pirate representation I have ever seen, is probably not a big seller.

Upon entering, the salon lived up to Disney’s description. The leather, dark wood tones, and deep grays they promised did not disappoint. This is a style that is definitely up my alley. Adding to the relaxation was a music loop of old-style nautical instrumental numbers and the occasional shipboard announcement. As our appointment took place while the ship was still moored in Port Canaveral, the logistical announcements were inevitable, as were the never-ending queries from passengers: How do they make appointments? What time does the bourbon bar open? The answers to those questions are “Senses, deck 5 forward” and “5:00 PM”, respectively. Knowing this information ahead of time, should you sail aboard the Wish, will save you time, and the barbers and patrons trying to relax without interruptions will thank you.

The haircut was tidy and efficient, with one stylist even taking time to offer suggestions that were slightly different from the normal style. This is something I like a great deal, as I am accustomed to a stylist looking at a computer to see what I got last time and assuming that’s the only way to cut my hair. A professional stylist offering recommendations is a breath of fresh air for me.

Batten down the hatches! Once the haircut was complete, it was time for the ELEMIS Pro-Collagen Grooming Treatment with Shave. As I have a beard, the shave was mostly touch-up work with small recommendations about the best way to style the beard. In a recent review video, we did note that neither of us experienced the luxurious and terrifying use of a straight razor. I assume this is for safety reasons, as nobody wants to be on the business end of a straight razor when the ship moves unexpectedly. Still, a bit disappointing for a treatment Disney Cruise Line referred to as the “shave of all shaves.”  At any rate, the real work was about to begin with the facial.

ELEMIS, as I would learn, is a brand of not-exactly-cheap skincare products, though I confess I don’t know how many were used or in which order they were applied. My stylist began a fusillade of skin care attacks that would make any pirate proud. I was quickly relaxed by the soothing feeling of what I assume were very expensive creams and balms being applied to my face. I drifted in and out of deep relaxation until my stylist applied something cool and very refreshing to my face and continued, even onto my beard and eyebrows. The realization set in that they were applying a mask to my face. There was no panic. I was relaxed and had placed all my trust in the stylist. Were those slices of cucumber going onto my eyes? I have no idea, but it felt good. After a few minutes, the stylist began a relaxing arm and hand massage. That was it. I was in a total state of relaxation, on the verge of sleep, as my body relaxed to the rhythm of the massage, the music, and the queries from bourbon-loving guests regarding the aforementioned operating hours of the bar. I lost track of time. Had I been there 30 minutes? 3 hours? After the stylist performed the difficult task of removing the mask, the entire process (including the haircut) took around 95 minutes. Note: At no time did I hear a ticking clock or see a crocodile. OK, so there was a crocodile with a clock on a nearby shelf.

With our treatments complete, it was almost time for the bar to open. The bar is essentially a wall with some shelves and a counter, hidden behind folding closet doors that are opened, you guessed it, at 5:00 PM nightly. Their bar offers a number of whiskeys and a bartender eager to make you a hand-crafted old fashioned. You will even notice some interesting props on the shelves, like the famous hook of the establishment’s namesake.

There is no dedicated seating for the bar: We just sat in the same seats we used while waiting for our treatments. The common move here is a sort of “build your own old fashioned” system. We were presented with several simple syrups and bitters options, and based on those choices, the bartender would then suggest a whiskey to go with it, finished off with a garnish and something called “bourbon cologne”. The selection, though small, is of high quality, featuring a number of bourbons, ryes, and scotches. As a bourbon lover, I excitedly perused the selection, which started in the middle range of bourbons, with things like Woodford Reserve Double Oaked and Blanton’s, all the way up to the rarified air of Pappy Van Winkle 23 year. I didn’t ask for the price there, but elsewhere on the ship, including the dining rooms, Pappy 23 was selling for $400 an ounce.

Once the bartender has created the drink, it is then inserted into a glass dome, which the bartender fills with smoke to give a smoky flavor to the drink. All in all, it’s a great selection with great presentation. The pricing, I must admit, was a bit of a head scratcher. The drink with Woodford Double Oaked bourbon was $33.00, certainly a high price for a cocktail, but something that’s not surprising aboard a Disney Cruise Line ship. However, the same drink with Blanton’s was only $22.00. Blanton’s and Woodford Double Oaked have similar MSRP pricing, yet Blanton’s, an allocated spirit, is much harder to find in your local liquor stores. Pro tip: Get the Blanton’s while the getting is good. It’s also the second cheapest bourbon in the dining rooms, at only $13 a pour.

At any rate, the drinks were delicious, and a crowd had started to gather. It’s worth noting that Hook’s Barbery is near Worlds of Marvel, a restaurant in every passenger’s rotation, so a curious crowd is sure to crowd Hook’s Barbery on their way to dinner, which starts as early as 5:45 PM.

From the décor to the treatments to the drinks, Hook’s Barbery is a delight aboard the Disney Wish. It was, perhaps, the highlight of the entire cruise. The theming walks a perfect line between reality and fantasy, which is what has set Disney apart from their competition for so many years. While they offer haircuts for kids, this experience is probably best for the old salts. For a brief moment, you can feel yourself being transported to a different place and time while enjoying luxurious treatments and delicious cocktails. These experiences and moments are the difference, and the reason Disney Cruise Line fans are willing to spend the extra money for a voyage. While the ship itself has received mixed reviews, Hook’s Barbery is everything we were promised and more.

Previous
Kal David, Voice of Sonny Eclipse, Passes Away at 79