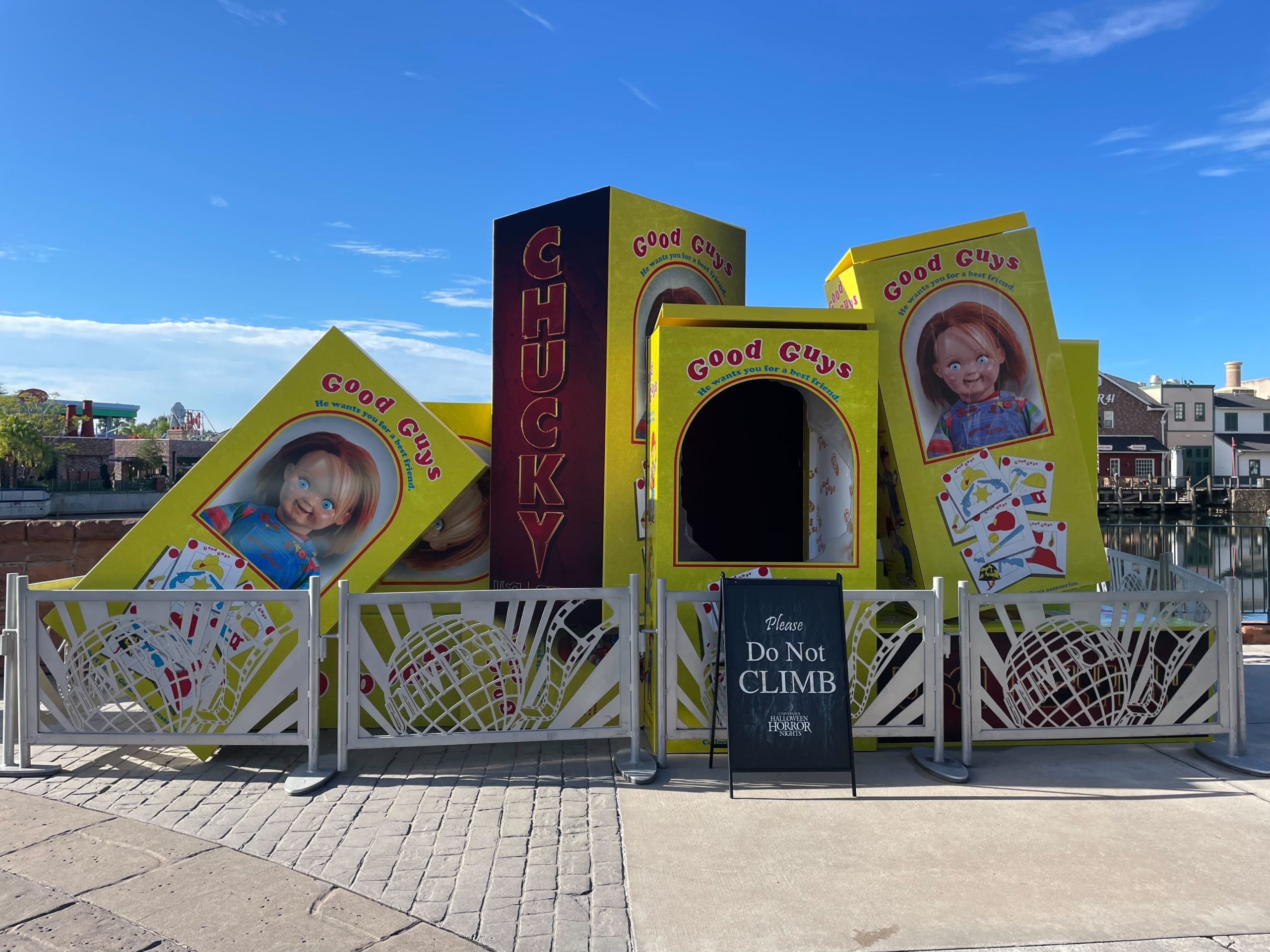 We’re a week away from the start of Halloween Horror Nights 31, which means many of the scare zones in Universal Studios Florida are starting to look complete. We visited the scare zones on our most recent trips to see what’s new, and also discovered the return of last year’s Chucky photo op. 1

This pumpkin-themed scare zone is at the front of the park. Platforms covered in pumpkins, vines, and other props have been moved around this week as Team Members apparently decide on the perfect spot for them. Each platform is said to represent a different scare zone in the park. The one pictured above has a wrought iron fence and shovel on top, with skeletons embedded in the platform itself — maybe for Graveyard: Deadly Unrest?

This platform has witchy props, like a broomstick, hat, and cauldron. It probably represents Conjure the Dark.

Giant vines and nets wrap around the trusses over the walkway.

Can you spot Lil’ Boo?

This other platform has a freaky scarecrow among bales of hay on top — a clear reference to Scarecrow: Cursed Soil.

A few large props have moved into this scare zone. We saw a windmill surrounded by a dilapidated fence earlier this week.

A few days later, a truck had joined the windmill.

This is a vintage John Deere Plymouth pickup truck.

Past the trusses are a few more set pieces and props.

There are crates, bales of hay, barrels, and a couple of sheds.

We’re sure a few scarecrows will be popping out of these sheds to scare us.

Across the lagoon is the Conjure the Dark, a witch-themed scare zone.

It has several stoney structures.

This monolith is carved with runes.

A skeleton has fallen among the rocks at the base of the monolith.

The runes continue on the back.

Another nearby monolith has more skeletons, but no runes.

More runes are on this stage. Something atop it is wrapped in a tarp. A wooden door is at the back, under an ominous eye, and a cauldron is to one side.

There are groups of barrels, plants, and cauldrons throughout the area.

Some of the barrels are wrapped in ropes or topped with burlap.

A skull with moth wings is attached to a wooden plank.

More stone structures, these with “boo holes” were also added to the scare zone this week.

Boo holes are spots where performers will hide to jump out and scare guests.

These fake stone structures also have fake trees growing through them.

Bones are attached to the bases.

The sand bags inside the boo holes are to hold the structure down in case of wind.

At this photo op, Halloween Horror Nights guests will be able to pose inside one of many giant Good Guys Chucky doll boxes.

Chucky is pictured in the window of most of the boxes.

One box has a “broken” window for guests to stand in.

The entrance to the photo op is on a short ramp to the side.

Check out the full list of houses and scare zones that will be at Halloween Horror Nights 31.