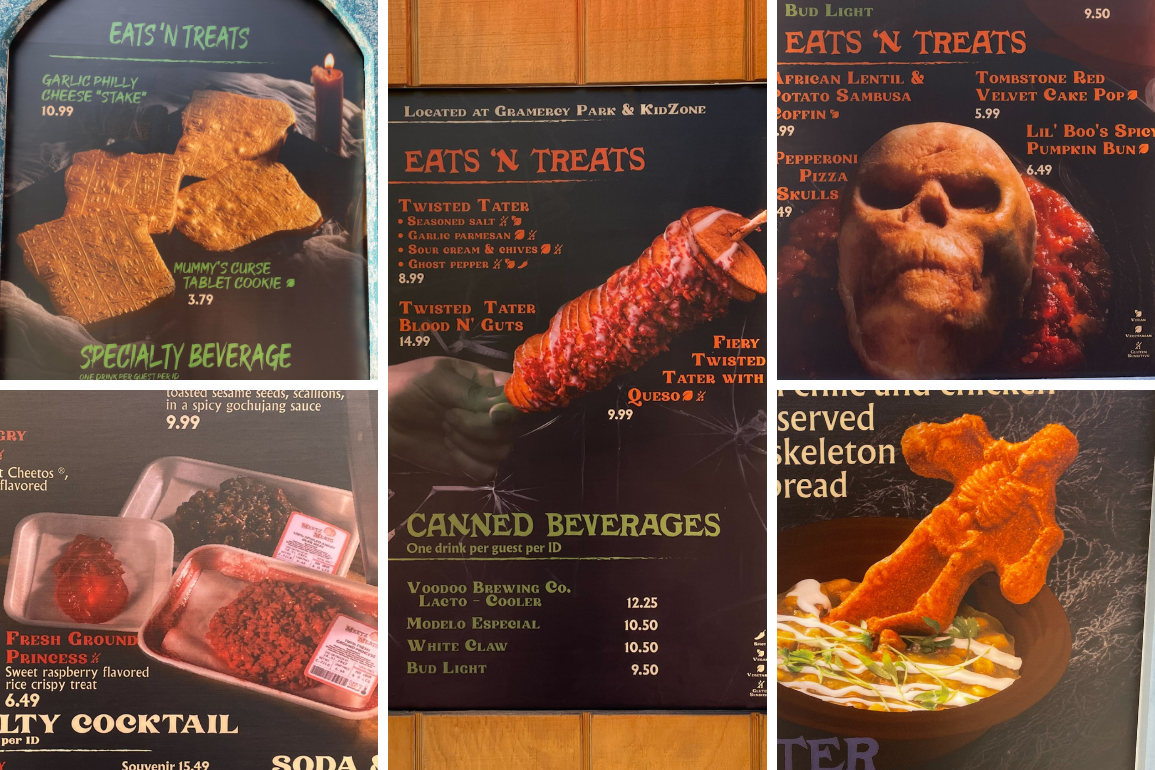 We’re just around the corner from the spookiest time of the year, and (most) of the food & beverage booths for Halloween Horror Nights 31 now have full menus with prices.

The Día de Los Muertos stand outside Cafe La Bamba is serving up a Burning Skull specialty cocktail in a souvenir cup, plus a host of fare including chiccharones, tamales, street tacos, and more.

There’s also popcorn that costs $24.99… perhaps it has a popcorn bucket included?

Both booths are serving the same menu, with standard twisted tater options and the return of the blood n’ guts tater. A new addition this year is the fiery twisted tater with queso.

A Monsters-themed booth outside Spongebob Storepants offers a garlic philly cheese “stake” (get it?) and Mummy’s curse tablet cookies.

The pun continues at the Good Guys booth, with a Dirty Valentine cocktail in a souvenir cup, plus three themed eats ‘n treats: The Good Guys Burger, the “Wanna Play?” Beignet, and the Chili Lee Ray.

The Weeknd After Hours Nightmare Bar

There are three desserts dressed up as meat slabs plus Spicy Fried Chicken “Offals” and vegetarian Fried Zombie Brains.

A small Meetz Drinks bar has a selection of canned alcohol, soda, water, and a Bloody Mary.

Grave treats, a Lil’ Boo themed pumpkin bun, and Bog Slime 2: The Sequel are on offer in Gramercy Park.

Ghoul Juice returns at the bar in the Transformers extended queue.

The carnitas and mozzarella arepas, which are quickly becoming a staple of Universal seasonal events, can be found at a food truck at the Music Plaza.

They are joined this year by Witches Spell Cauldron Stew with skeleton-shaped cornbread.

Mac ‘n cheese can be found in its typical location at the food truck in San Francisco. This year’s flavors are Sacrificial Remains (or chili with chorizo) and Burnt Offering (char siu pork).

A booth at the patio of Lombard’s Seafood Grill serves up drafts on tap, canned drinks, and two specialty cocktails.

The pumpkin-shaped booth on the London side of the Springfield Bridge has a Spiked Boba Peach Lemonade plus two corn dogs — one churro-style and one covered in… maggots?! (“Maggots, Michael. You’re eating maggots. How do they taste?”)

Which dish or drink are you looking forward to trying? Let us know in the comments, and stay tuned to UPNT for reviews of every item.