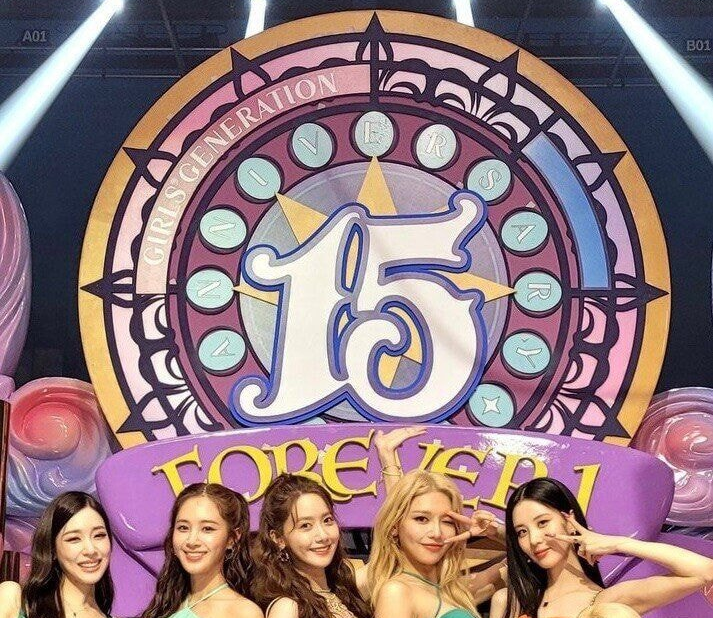 While there are innumerable fans of both Tokyo Disney Resort and the popular K-Pop girls group Girls Generation, these two worlds collided in an unexpected way this week after the director for the group’s latest music video was forced to issue an apology for plagiarizing from the popular resort.

The popular group Girls Generation reunited after five years apart to release a new single and album called “Forever 1,” with the music video released online last week. The new song and album commemorates their 15th anniversary as a group, so naturally they celebrated with a special “15” logo in their video.

Eagle-eyed Japanese fans were quick to notice that the logo in “Forever 1” was uncannily similar to that of the Tokyo DisneySea 15th Anniversary. “The Year of Wishes” as it was known ran from April 2016 to March 2017 and featured this insignia above the Passaggio MiraCosta between the AquaSphere Plaza and Mediterranean Harbor, common for anniversaries and special events. The two bear an uncanny resemblance, with “Girls Generation” replacing “Tokyo” in the top left corner, “Anniversary” moved to the former location of “DisneySea” above the 15 logo, the general sundial look, and of course the “15” itself being pretty much exactly the same.

The video’s director Shin Hee Won issued an apology in Korean via his Instagram page following the controversy, stating “I directed the music video for Girls’ Generation’s “Forever 1.” First of all, I’d like to apologize to the members of Girls’ Generation as well as SM Entertainment for causing this controversy over one of the set designs used in the “Forever 1″ music video. Since I’ve been contacted about the music video, I’ve been involved in not only planning and directing it but also designing the details of it, like picking out props. I’m terribly ashamed of myself and regretful that I ended up plagiarizing. When putting together the set for the group’s 15th-anniversary parade, I looked up inspirations for the number logo design. I found several references, and when I came across an image that I believed to be suitable, I decided to use it without double-checking the source. Today, I learned that the design belongs to Disney Japan’s 15th anniversary logo. And I would like to sincerely apologize for using the design without researching more about its copyright or seeking to get permission to reference it. Going forward, I will do better research and be more vigilant when producing-directing so that something like this never, ever happens again. Finally, I apologize again for causing this problem for Girls’ Generation, SM Entertainment, and the girl group’s fans who watched the MV.”

Neither The Oriental Land Company nor The Walt Disney Company has issued a statement or threatened legal action against Girls Generation or its label.

The stage piece containing the plagiarized logo is plainly visible at the beginning of the video above.

How do you feel about this plagiarism incident? Let us know in the comments below!