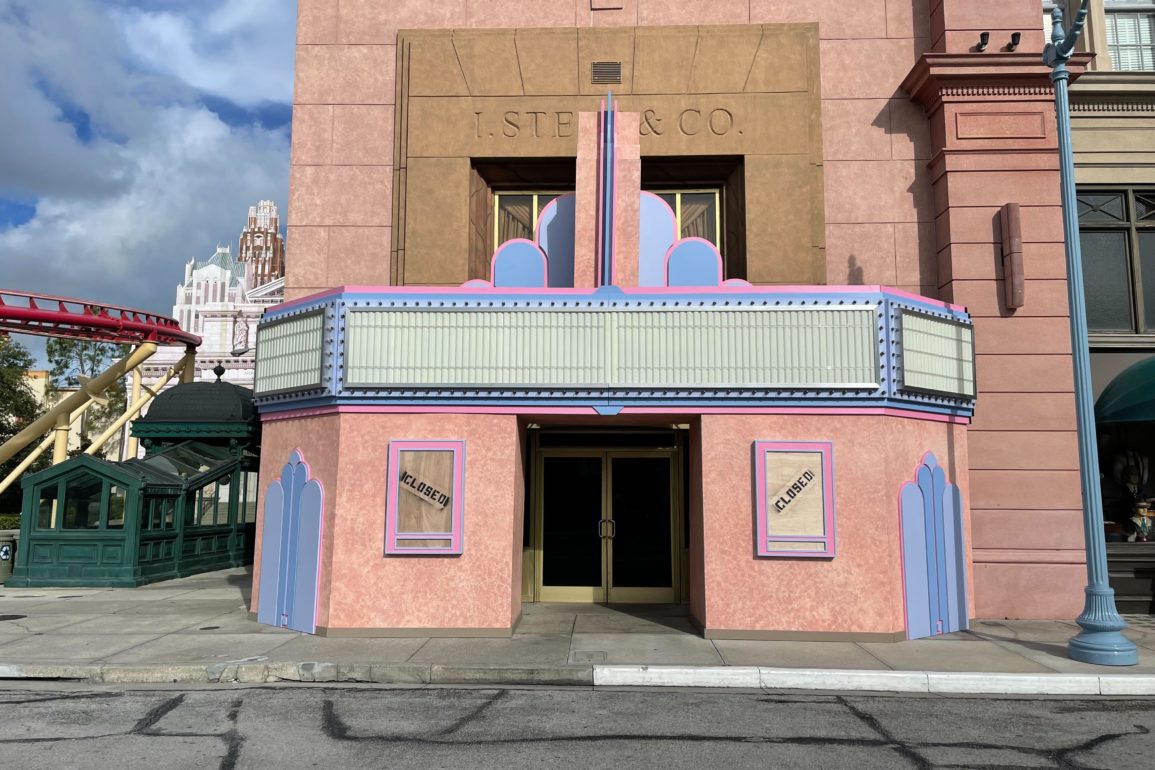 Welcome to another exciting day here at the Universal Orlando Resort. Halloween Horror Nights is right around the corner, so there’s a lot happening around Universal Studios Florida. Let’s jump in and see what’s happening today.

The summer Tribute Store is now closed, but that just means it’s time for Halloween Horror Nights! We can’t wait to see what awaits us in the new HHN Tribute Store.

Tons of food and bar tents have popped up around the park. A few of them are themed, including this Day of the Dead booth next to Cafe la Bamba. You can take a closer look at all the food booths and their locations in our post here. We’re eagerly awaiting menus!

At the time of writing this, we still haven’t gotten any scare zone announcements, but the San Francisco set is starting to take shape. Check out the large stage and cauldron that has appeared over night. This scare zone is located at the exit of Fast and Furious: Supercharged.

The Nettlewoods Cemetery is looking extra creepy with the addition of branches and moss.

Even though the Tribute Store is closed, you can find some of the treats around the park still. The JAWS fish bowl cakes can be found at Studio Sweets and the San Francisco Candy Factory at Universal Studios Florida. We’ve also spotted them at the Islands of Adventure Market and Export Candy Shoppe. The bowl is a great souvenir and the cake is delicious!

A lot of the Back to the Future, JAWS, and E.T. merchandise has been spread out to different gift shops around the park. Many of the Roosevelts shirts can be found at the Film Vault across from Transformers. The Film Vault has a lot of stuff, but we also suggest checking E.T.’s Toy Closet and the Universal Studios Store for more retro merchandise.

There’s some repairs taking place in Springfield, so the Chief Wiggum and his cop car are missing.

Slow but steady progress being made on the former Monsters Cafe.

Over at Islands of Adventure, we found a new Halloween Horror Nights shirt in the All Hallows Eve Boutique. A ton of new merchandise was released last week. You can check out our full merchandise post with prices here.

Why is that grinning pumpkin so creepy?

New Wizarding World plush! The Death Eater plush is adorable. The Draco Malfoy one is a little odd. Both of these are available at the Islands of Adventure Trading Company.

Thanks for joining us around the parks today. It’s been a busy day, but we’ll be back again soon! Be sure to stay following along with Universal Parks News Today for all the latest updates.

Previous
REVIEW: “If Carthay Circle & Brown Derby Had a Baby on the Sea” – Dining at 1923 Aboard the Disney Wish