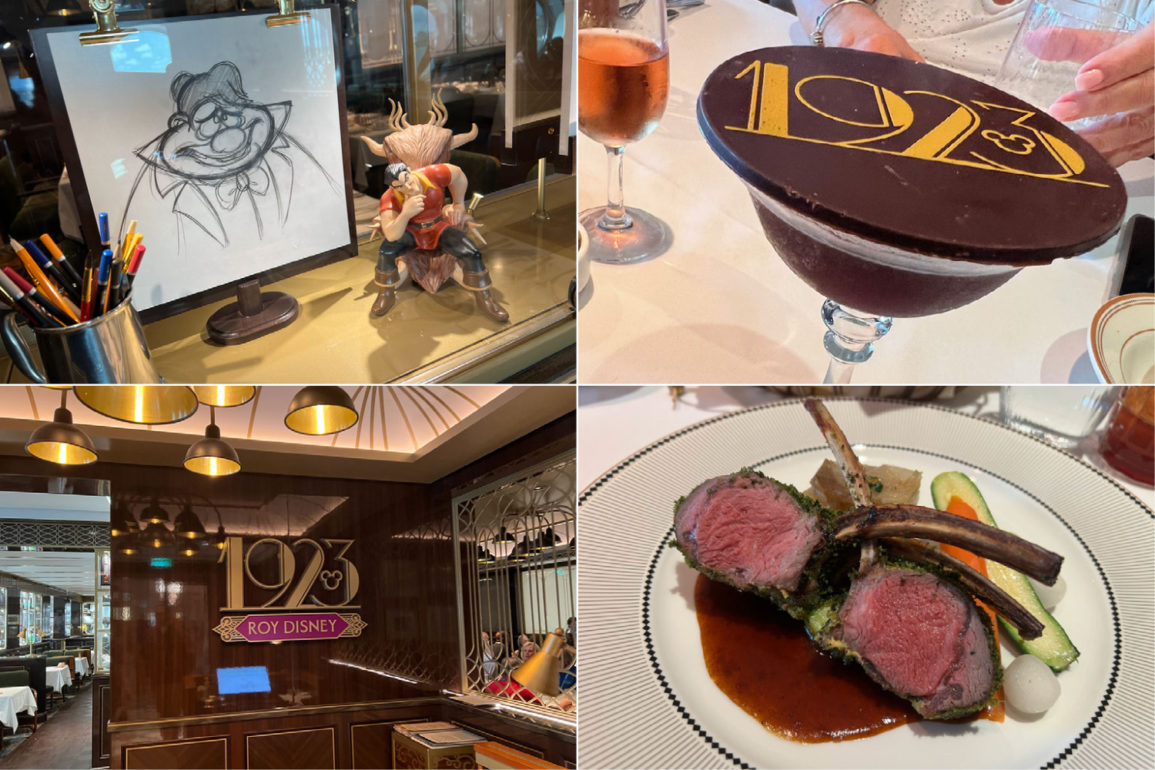 REVIEW: “If Carthay Circle & Brown Derby Had a Baby on the Sea” – Dining at 1923 Aboard the Disney Wish

The Disney Wish, the newest ship in the Disney Cruise Line fleet, has several unique offerings. We dined at 1923, one of the rotational dinner restaurants, and tried everything on the menu.

First off, the restaurant is actually separated into two dining rooms, the Walt Disney and the Roy Disney. Make sure to check your Navigator app to see which one you are dining at.

The space is meant to evoke golden age Hollywood dining, such as Musso & Frank or a visit to the Frolic Room.

Throughout, sketches and concept art along with maquettes used for producing some of Disney’s most iconic animated features are displayed.

“Beauty and the Beast” in particular is prominently represented.

Tableware is largely copper and white-colored. Everything from plates to salt and pepper shakers bears the 1923 logo.

Also represented are classic films like “Peter Pan” and “Bambi.”

Even oft-forgotten films like “The Sword in the Stone” see representation here.

“Moana” and “Frozen” have a home here too.

The restaurant celebrates 100 years of Disney animation, from the founding of the Walt Disney Company in 1923, all the way up to today. The two separate 1923 dining rooms, “Walt Disney” and “Roy Disney”, travel through time starting from the back of the restaurant, and then greet diners upon entry with displays representing more recent films.

And of course we can’t forget “Pinocchio,” “Alice in Wonderland,” and “Sleeping Beauty.”

The displays range from maquettes to art prints, to fun scene-dissecting pieces, and more. While some “props” are simply merchandise pieces from the past, there are some custom-made items on display, including a sami drum for the Northuldra people in Frozen two that was handmade by a. couple in Finland, as well as the Fijian ship model representing Moana that is made by a Hawaiian artist.

The menu features items with nods to many LA-area landmarks and locations important to Walt and Roy:

The fig and olive bread is quite good, but they’re also mixed in with some of the standard rolls that are served with meal services aboard. The honey butter dip makes anything good, adding a sweetness and creaminess to every bite.

It’s not the best tuna we’ve had, but it does the job for those looking to eat a little lighter. The yuzu mayonnaise and wasabi will elevate each bite, but some of the other parts of the dish may have not been as fresh as they could be,

We were worried about the tortellini by the look of it, but it was honestly quite good. They’re a little doughy, on the al dente side, but that’s probably how they are best served. Each one is plump and filled with rich cheese. The portion is small, so be forewarned that you may want to order more than one for the table. We certainly regret not doing so.

Honestly, we’ve never been blown away with the food on Disney Cruise Line outside of some experiences at Remy, Palo, and the like, so we were surprised by just how acceptable some of the dishes were at 1923 (I know that isn’t exactly high praise), especially after the cataclysmically bad meal we had at Worlds of Marvel. The burrata was more than adequate, tasting moist and fresh, nicely accompanied by the salty prosciutto. I believe this will please those in the mood for it.

The quality of the duck was not top-shelf here, but it was an OK dish. The intense sweetness of the apricot and the black raspberry jam made the dish somewhat enjoyable.

The pear is sweet, the fennel is bitter, and the entire combination is quite refreshing. The Manchego and the walnuts elevated the dish, making for a winning salad that is worth trying.

A standard salad that is along the lines of a Caesar salad for those looking for it.

We don’t know how much flavor the pulled guinea hen meat adds to this, but without it, you have a perfectly fine corn chowder. It’s thick and salty, filled with chunks of corn.

Again, here’s another dish that won’t change your life, but that we think you’ll enjoy. It’s a vegan option as well, but that doesn’t mean everyone can’t enjoy this well-seasoned tomato soup that is just thick enough in consistency. The sourdough crostini soaked in the soup was enjoyable as well.

A rather mediocre pasta dish that is very one-note in its cream flavor. It is probably over-salted and slightly overcooked as well.

A perfectly serviceable piece of salmon. It wasn’t too dry, but it also wasn’t the most tender or moist piece. The two pieces of rapini (which are nicely prepared with an oily coating and offer a pleasant crunch in each bite) are the only real side that comes with this, so be forewarned, it may not be the most filling entree on the menu.

This was the highlight of the meal for us. The lamb was as tender, juicy, and bursting with flavor as it could be. It is heavily seasoned, but it absolutely works, especially offset by the thick and rich zinfandel rosemary sauce.

There are some rather disappointing cuts of beef on board, this might be the best of the bunch though. It was cooked correctly to medium inside, had a nice, slight char on the exterior, and was properly seasoned. The accompaniment left something to be desired as the bacon was undercooked and the potato hash was somewhat flavorless. The green beans were good at least.

We were really surprised by the amount of lobster and avocado on top of this, making it not quite as light of an option as you might expect. It’s a really nice mix of vegetables with the light, yet richly flavored Bibb lettuce, in total creating possibly the best salad option on the entire ship.

These were a big disappointment. They did not come out hot and the dulce de leche sauce was a little too thick and overpowered the intended texture and flavor of each bite of churro. We know they sound good, but they weren’t, so trust us and skip them.

The dish would probably benefit from a little more of the yogurt creme as it’s a drier cake. The guava gel is sweet enough to offset most of it, but you’ll want to distribute that white, sweet creme as much as possible if you order this.

Here comes the “Disney Flavor Lab Special”. Since Pandora opened in 2017, we can’t even count the amount of these “mousse wheel” desserts we’ve had at Walt Disney World and beyond. That being said, this is actually one of the better entries. The apple crumble below is perhaps dry on its own, but when combined with the moist cheesecake covered in caramel, it is a memorable and delicious end to a meal.

Every restaurant in the dining rotation offers some sort of ice cream sundae, and this one feels the most in-theme and is the most satisfying. It’s just vanilla ice cream, hot fudge, brownies and whipped cream, but sometimes that is all you want after a good meal. The brownie bits are soft and moist and the hot fudge is properly hot, making for a solid option. There’s something about the look and color of this dessert matched against the setting that just feels right, so if you want to order one just for a cute picture, we totally understand.

The cream ended top being the primary flavor here, with he blueberry and lemon being way too masked in every bite. While the presentation is pretty, it’s just not worth ordering.

For a no-sugar-added dessert, this was very popular at our table. The base heft of the coconut pudding is filling, and that creaminess perfectly pairs with the strawberry and lime flavors above and the match crumble. I would order this again.

The Boulevardier feels like the proper cocktail to drink in this venue, maybe because of the giant logo chocolate piece on top though. Woodford is our preferred rye more often than not, and the Lillet Rouge is a nice stand in for what is typically Campari.

There are a lot of Old Fashioned on this ship, and this isn’t one of the more memorable beyond the candied bacon. I’d save your money and take it to Hook’s Barbery or to The Rose (where Jennifer and a team of very experienced Disney Cruise Line bartenders can make you an off-menu one).

The Glenmorangie Nectar D’Or, is typically described as follows:

That mixed with ginger beer did not make for a cocktail we would order again, but those with a different taste in cocktails may disagree.

Walk back in time and discover the classic flavors of the French aperitif, all paired to some exciting bites.

This may be worth ordering just because you’ll probably never forget it. It’s a nice way for someone to try these wines for the first time, paired with fun and easily recognizable snack pairings (M&M’s, nuts, etc). It’s a charming little experience that is well-priced, shareable, and should be enjoyed at this venue. Here’s a little more info about the wines:

• Lillet Rouge (1962–present): A red-wine-based liqueur first suggested by the American wine merchant and importer Michael Dreyfus, one of the first to import Lillet into the US

Lillet is an aperitif wine, intended to be served well chilled at 6–8 °C (43–46 °F). In France, Lillet is usually served on ice with a slice of orange, or a lemon or lime peel. In other countries, especially in the US and UK, it is more often used as a cocktail ingredient.

1923 is a perfectly enjoyable restaurant on the Disney Wish. Not offering a show is a nice change of pace, and honestly a necessary diversion from the other venues, giving family and friends a chance to actually sit at a meal and talk to each other. At times, the cuisine reminds us of Carthay Circle Restaurant and Hollywood Brown Derby, which is fitting given the interior echoes both at times as well, but when you serving California cuisine of a certain quality, you are bound to be similar to those theme park restaurants. It probably also draws comparisons since it literally plays the same background music loop as the Disney California Adventure restaurant icon restaurant as well.