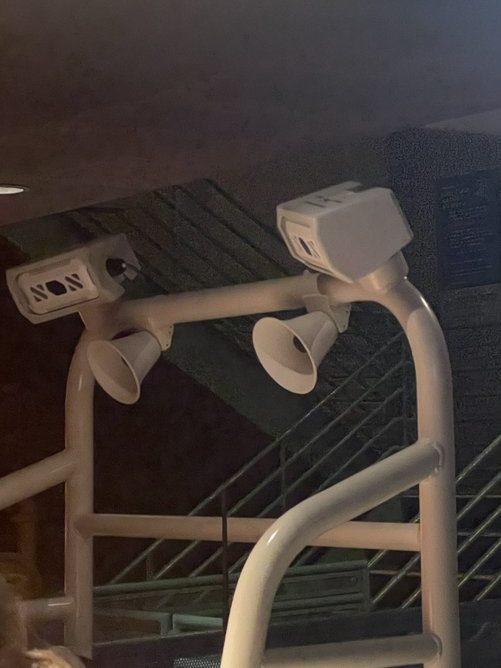 Once again, Disney has attached a mystery apparatus to ride vehicles (The CTX Time Rover) at Dinosaur in Disney’s Animal Kingdom.

On the back of some of the EMVs, a mysterious rig is set up. When first installed on one Time Rover in 2019, the rig had three devices attached, all pointing down towards the guests. A close up of the devices showed what appeared to be cameras with two reflective type symbols on the left and right.

The current iteration is white instead of black, perhaps to match the vehicles. There are now only two of the devices present, but there are also two loudspeakers or megaphones of some kind that were not on the previous apparatus.

It’s remains unclear what these devices are being used for, as there does not appear to be any changes or updates to the ride, story, or show scenes. It could be to create a ride video for guests, but that would be awfully strange angle. It seems more likely it is some sort of safety device to keep guests from leaving the vehicles mid-ride.

When we have more information, make sure to keep an eye here on WDWNT for all of the details and updates.

More Signs of Construction Visible at Roundup Rodeo BBQ Restaurant in Toy Story LandApril 23, 2022
WATCH PARKSCENTER — Everything You Need to Know about MagicBand+ and a Preview of the 2022 D23 Expo!July 31, 2022
PHOTOS: Decorations Arrive, Chalk Artists Begin Designs for 2022 International Festival of the Arts ...January 12, 2022