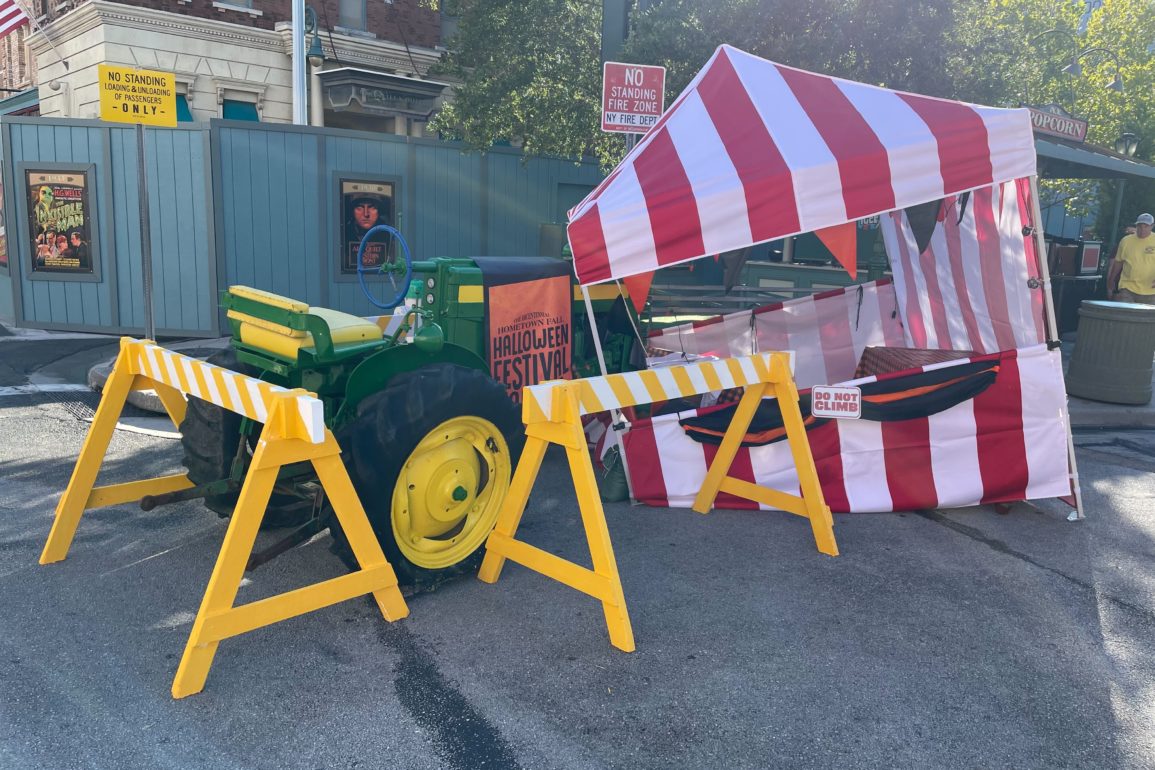 The terror of Halloween Horror Nights at Universal Studios Florida is drawing ever closer, and sets for one of the scare zones have already taken over New York!

Over by the popcorn stand, it looks like a Halloween festival has gone horribly awry.

A John Deere tractor has collided with a red-and-white striped tent. The most recent speculation map has this area listed as a “Candy Mutants” Scarezone, so perhaps a mutant attack is imminent.

Certainly, the event started with the best of intentions, as evidenced by this “Bicentennial Hometown Fall Halloween Festival Parade” banner on the tractor.

One of the casualties (at least that we know of) was this table, which has been knocked over and had its tablecloth seriously wrinkled.

The same banner can be seen on the opposite side of the tractor.

Orange lights and flags have been hung up from the roof of the tent to add to the festive feel.

Across the way, the stage that went up last week has had a large backdrop added to make a judges’ booth, with barrels and hay bales nearby.

We were stalking Revenge of the Mummy as we await its reopening, when we spotted this art of a field of corn stalks.

It seems inviting enough, but we’ve been to enough Halloween Horror Nights to bet that this is going to be a photo op gone wrong.

A plant is located behind the art to give it a little more character… and to give whatever’s lurking a place to hide.

Meanwhile, above the street, strands of lights stretch across the buildings.

More strands can be found in the trees near the popcorn stand.

Finally, over by Central Park, rigs have been set up, likely for even more thematic lighting.

Watch our walkthrough of the new scare zone sets in the video below.

All will be revealed soon when Halloween Horror Nights kicks off on September 2. But if you can’t wait, some event merchandise is already available now!

Next
Guardians of the Galaxy: Cosmic Rewind, Star Wars: Rise of the Resistance, Seven Dwarfs Mine Train, and Avatar Flight of Passage to be Only Individual Lightning Lane Attractions at Walt Disney World