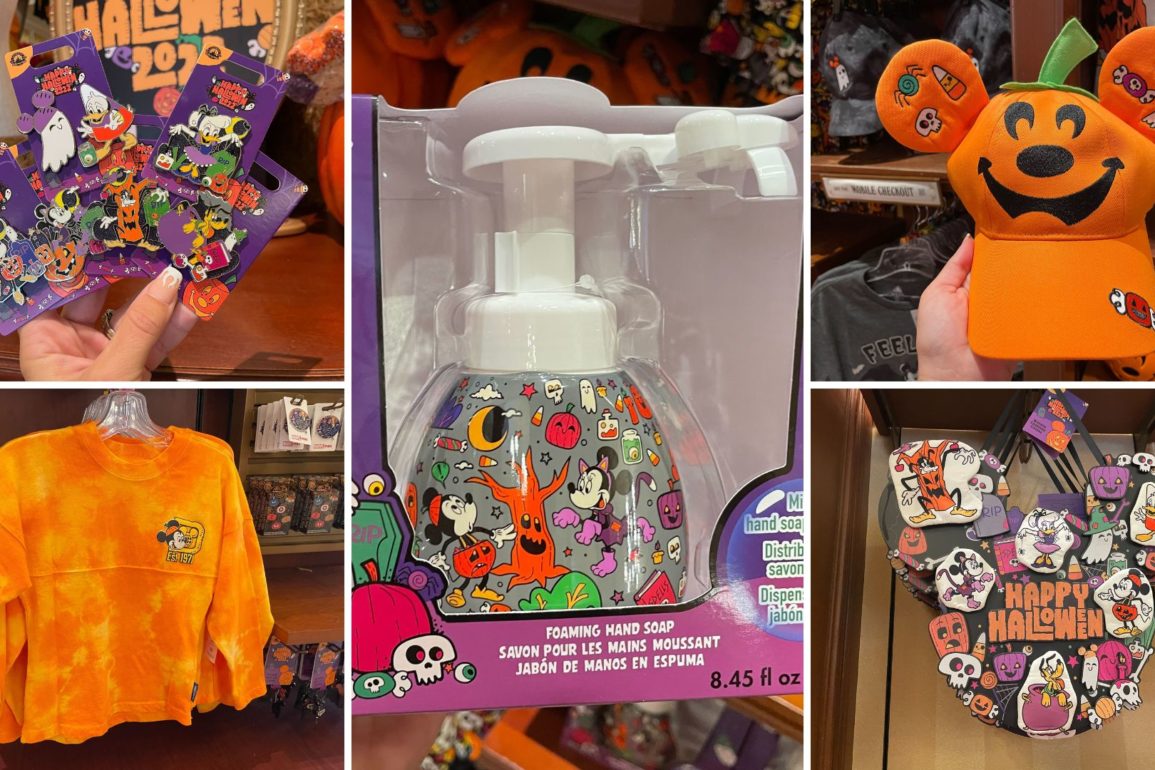 The spookiest time of the year is finally here, and there’s a ton of new Halloween merchandise at Walt Disney World to celebrate. We’ve gathered it here in a full list with prices for every item.

We found most of the new merch in the Emporium at Magic Kingdom.

This button-up has an all-over print featuring Mickey and friends in their Halloween costumes.

There is also other spooky imagery, like ghosts, candy, potions, and skulls.

The characters appear in these Halloween costumes throughout this merchandise collection: Mickey as a jack-o’-lantern, Minnie as a cat, Goofy as a scary tree, Pluto in a cauldron, Donald as a piece of candy corn, and Daisy in a spider-inspired dress.

This bucket resembles a jack-o’-lantern with Mickey ears.

The eyes, nose, and mouth are white with purple accents.

The ears are black and covered with ghosts, skulls, candles, gravestones, and more.

The bucket plays music and lights up.

It has a black rope handle.

The other side reads, “Trick or treat” in black letters.

This shirt is white.

Mickey, Pluto, Goofy, and Donald are also pictured to the sides.

The youth tee has the exact same design as the adult tee above.

This ball cap is orange with a black jack-o’-lantern face on the front.

The Mickey ears have embroidered images of a skull, ghost, potion, and candy.

The hat has a green stem on the top.

This sweatshirt is black, with a similar design to the shirts above.

Pluto peeks out of his cauldron on one shoulder.

Mickey, in his pumpkin costume, is near the bottom.

The “D” Mickey globe logo is embroidered on the left breast.

Goofy, Donald, Chip, and Dale are pictured on the sleeves.

Chip and Dale are raiding a pumpkin full of candy.

A giant Mickey jack-o’-lantern is on the back.

This hoodie has the same all-over print as the button-up.

It zips up with a black zipper.

The bottom and wrists have black stretchy fabric.

And the interior is black.

This dispenses hand soap in a Mickey head shape.

The dispenser is grey with Halloween images, Mickey, and Minnie.

This hoodie is black with an all-over print of small images. Mickey and friends aren’t featured, instead it just has ghosts, candy, and other Halloween icons.

It has soft white lining.

It has pockets and zips up the front.

These sweatpants match the hoodie above.

They also have pockets.

This tee is purple and features Daisy and Minnie on the front.

The neckline is black.

Daisy and Minnie are saying “Boo to you!” A few ghosts float around them.

A small ghost is on the back shoulder, wearing a pink Mickey ear hat.

This candle holder is shaped like a Mickey jack-o’-lantern. The face is actually cut out of the ceramic.

A candle can be placed in the back, so the flame glows through the face.

This blanket has the same all-over pattern with Mickey and friends we’ve seen on apparel.

This set includes two throw pillows. The first is a Mickey jack-o’-lantern with a yellow face and green stem.

It says “Happy Halloween” on the back.

The smaller pillow is a white ghost with black eyes and an oval mouth.

They come wrapped in a yellow ribbon.

This Mickey-shaped wreath decoration is black, and says, “Happy Halloween,” in the center.

There are plush images of Mickey and friends attached to the hard wreath.

Other images of candy, ghosts, skulls, and pumpkins are also attached, giving the wreath a three-dimensional effect.

Countdown to Halloween with this calendar.

It resembles a purple castle, with figures of Mickey and Minnie at the front and ghosts at the top.

Two orange blocks with numbers on them can be moved to countdown the days until Halloween.

Dress up your pet with this pet Spirit Jersey.

It’s black at the front and tie-dye orange at the back. “Happy Halloween,” with Mickey and some ghosts, is across the shoulders.

This smokey black and grey ball cap features a ghost wearing Mickey ears on the front.

This onesie also says “Boo!” across the front.

It’s orange with a white ghost, and the lettering is yellow.

Treat yourself with these Mickey-shaped rice crispy treats dipped in orange and purple-colored chocolate and covered in sprinkles.

This popcorn is also Halloween-themed and wrapped with an orange ribbon.

Kids will love this bubble wand, which has a Mickey jack-o’-lantern on top.

The bubbles come out of the top of the jack-o’-lantner.

The handle is black and covered in ghosts.

Bubbles can be refilled through the orange ball on the bottom.

The switch to turn on the bubbles is on the back.

This youth Spirit Jersey is orange and yellow. Mickey’s face is with the yellow Walt Disney World “D” icon on the left breast, above “Est. 1971.”

“Walt Disney World” is along the back, with Mickey and a few ghosts.

This keychain has several charms on a ring, and a lobster claw clip.

The charms are a Mickey jack-o’-lantern, “Boo!” speech bubble, and ghost.

There are six Halloween pins featuring Mickey and friends in their Halloween costumes.

Pluto is peeking out of a cauldron to look at a ghost below a cloudy sky.

Daisy is showing off her spiderweb rings, with spiders dangling from her fingertips.

Donald looks spooked by a Mickey ghost, with a green potion at his feet.

Goofy has a bird atop his tree costume and a spider hanging from his arm while he stands in a zombie-infested graveyard.

Mickey is trick-or-treating beneath a crescent moon.

And Minnie is hanging out on a pumpkin enjoying her candy.

We found a Cinderella Castle pin and Winnie the Pooh pin set over at Frontier Trading Post.

This set has four pins, each of a different character.

Winnie the Pooh is poking out of a Pooh-inspired jack-o’-lantern.

Tigger is wearing a vampire costume, including fangs and a cape.

Eeyore is giving a slight smile, dressed up as Frankenstein’s monster with a torn jacket and bolts on his ears.

And Piglet is wearing a witch’s outfit while flying on a broom.

The castle is purple on this pin, with a Mickey pumpkin, spiderwebs, skulls, ghosts, and bats around it.

An orange moon is behind it.

Finally, this Pandora charm features the same image of Minnie dressed as a cat, sitting on a pumpkin.

The other side says, “Boo!” over a ghost. We found this charm at Legends of Hollywood in Disney’s Hollywood Studios.

First up is this scoop neck top with a knotted bottom in heather gray that reads “My Spooky Place” along the bottom of the print.

Cinderella Castle is a black silhouette with orange windows to appear like a haunted house. There’s a full moon behind the castle and bats flying over top. Goofy, Donald, Mickey, Minnie, and Pluto are dressed up with trick-or-treating buckets.

Next up is this fun v-neck t-shirt patterned with Halloween candy, ghosts, jack-o’-lanterns, and eyeballs

The all-over print wraps around the t-shirt. Mickey jack-o’-lanterns catch our eyes, but there are many Halloween characters on this shirt. Green and white ghosts, red and orange jack-o’-lanterns, gray and white skulls, bats, eyeballs, and multicolored candy can all be found around the shirt.

After the cider has been made, you can reuse these tin containers for more Halloween treats.

The nutrition facts are listed on the back of each container.

The outdoor door mat has Mickey along the left side dressed as a jack-o’-lantern. Donald is in a candy corn costume on the right.

The middle reads “Trick or Treat” with a spider for an ‘i’ and a candy corn for an ‘a.’

The backside is black. The tag also tells us you can vacuum it to keep it clean.

Next is this black Minnie witch hat. It has a purple sparkly ribbon and orange bow which pops against the black brim.

The purple ribbon has silver stars and Minnie ears. The ears on each side of the hat have the same silver glitter.

The back is just as cute but doesn’t have the orange bow on this side.

Under the brim is purple satin.

This Mickey pumpkin bucket has a glowing face and also plays music.

The bucket lights up and plays music from speakers in the ears.

Each ear has bats, ghosts, skulls, candy, and other multicolor Halloween designs.

The backside reads “Trick or Treat” and would look awesome collecting snacks down the Trick-or-Treat Trail at Mickey’s Not-So-Scary Halloween Party.

The MagicBand+ features the same artwork as the Mickey & Friends merchandise that was previously released.

The “puck” section features a spooky-looking skull on an orange background.

One end of band is decorated with cartoonish-looking candy, including ghostly lollipops and candy corn.

The other end features Mickey Mouse in his pumpkin costume, excited to trick-or-treat. We found this at The Darkroom at Disney’s Hollywood Studios, where limited supplies of the band are available.

Keeping in line with the Mickey & Friends collection, the shoes feature Mickey and Minnie surrounded by ghosts, jack-‘o-lanterns, and candy. The same art has been featured on everything from button-up shirts to throw blankets to a soap dispenser.

The Jibbitz on this pair show Mickey in his pumpkin costume on both shoes.

The pattern wraps all the way to the heel, complimented by a black strap.

We found this at the Emporium in the Magic Kingdom.

What Walt Disney World Disney World Halloween merchandise will you be bringing home this year? Let us know in the comments!

Check out the Halloween merchandise from Disneyland too.