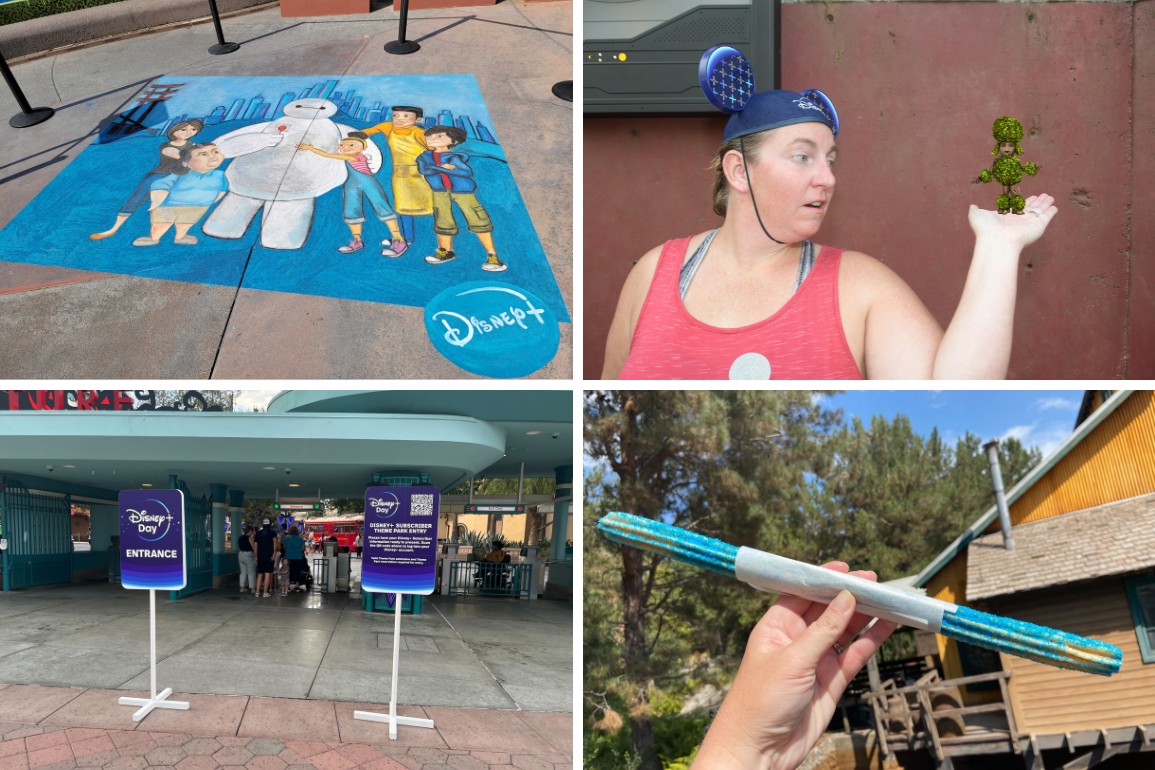 Disney+ Day has arrived at the Disneyland Resort, so we’re taking a look around to see all of the offerings going on today!

The Downtown Disney District was home to a collection of artistic photo opportunities, including this optical illusion chalk art by Lori Antoinette and William Zin next to the former ESPN Zone.

Raya and Sisu are ready to jump into the action!

Of course, the Disney+ logo appears next to the art.

Elsewhere, this balloon art showed a blue and silver archway, with blue balloon columns on either side.

The largest piece was this circular display, which featured images from various Disney+ movies and series on video boards.

Signs on each of the columns remind us “it’s time to celebrate.”

Another balloon arch could be found near Tortilla Jo’s.

Just steps away, this chalk art featuring the cast of “Baymax!” was on display.

A sign offered information about the artist, Zoila Erica Cobian.

Disney California Adventure proved to be the center of the Disney+ Day festivities.

Disney+ subscribers could enter the theme park 30 minutes prior to its official opening. A QR code directed guests to log into their Disney+ account.

Just past the entrance, bags of ear hats were piled up, awaiting distribution.

PhotoPass opportunities could be found around the park. Guests lined up to get a series of Magic Shots at Avengers Campus.

A sign noted that the location was exclusive to subscribers.

Guests could pose with a Disney+ Day roundel. (There’s no word if anyone tried to hold it like Captain America’s shield.)

Our reporter posed heroically for a Magic Shot, which added her to a montage of scenes from and art inspired by the land.

Another Magic Shot showed Baby Groot, looking as fresh in a leaf ensemble as he does in the “I Am Groot” shorts.

Shortly afterward, a crew showed up to film the site.

Promoting today’s release of “Cars on the Road,” one shot inserts the picture into a scrapbook of Lightning McQueen and Mater’s epic road trip.

Another places the Piston Cup in guests’ hands.

One shot caused a bit of confusion. Our reporter was told that she would be running away from Lock, Shock, and Barrel from “The Nightmare Before Christmas,” but instead, she only looked like she was fleeing Lizzie.

The “Cars on the Road” hype extended into Hollywood Land, where this display of balloons and characters was found.

Another photo op could be found near the entrance to the Hyperion Theater.

The blue sugar adds a blue raspberry flavor. It was very subtle, almost unnoticeable. We had to ask the Cast Member serving us, but we did notice a bit of difference from the regular sugar. It’s available for $5.00, the same price as the standard churros.

The ear hats and buttons were being distributed in the tunnel under Disneyland Railroad tracks.

In the Town Square section of Main Street, U.S.A., a special photo op was set up to promote today’s release of the remake of “Pinocchio.” The op shows Pinocchio still as a puppet sitting on a desk in Geppetto’s workshop. Cleo swims in her bowl nearby.

The Disney+ Day churros were also available at the stand near Buzz Lightyear Astro Blasters in Tomorrowland.

One of the Magic Shot locations in the park was located just steps from the Matterhorn Bobsleds in Fantasyland.

One of our reporters demonstrated the shot, which showed “Encanto’s” Isabela making the flowers bloom.

Another spot was situated near the entrance to Star Wars: Galaxy’s Edge.

This Magic Shot starred Princess Leia’s droid, L0-LA59, or Lola, as seen in “Obi-Wan Kenobi.” All in all, it was an epic Disney+ Day at the Disneyland Resort!