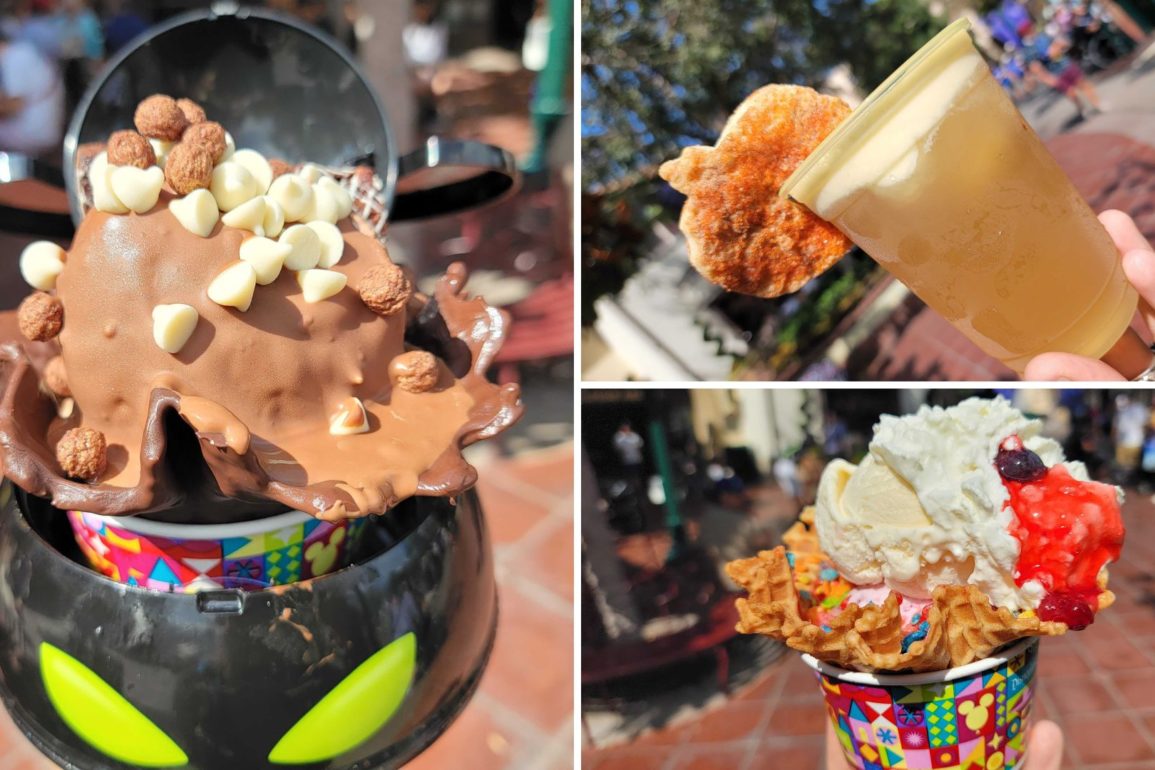 Guests can get the sundaes on their own or in a Maleficent bowl.

This was a nice, bright, creamy sundae that brings the best of vanilla and strawberry ice cream into contact with a fresh fruit compote that is the real star of the show.

Even the processed, canned strawberries from the strawberry ice cream tasted fresher and more alive when alongside the compote.

It is billed as a cereal sundae, though the cereal is one of its more easily overlooked aspects. This would be better described as a berries and cream sundae. Overall, we enjoyed the treat and will likely revisit it soon.

You can get the Cereal Sundae in the Maleficent bowl (below) for $17.19.

The Chocolate Brownie Sundae is just an elevated version of a regular chocolate ice cream sundae, dressed up to be its very best version.

The chocolate shell sauce forms a concretion over the top of the ice cream, holding together the Cocoa Puffs and the other chocolate chips and various toppings, which is then broken through to scoop the ice cream out.

It’s not that anything about this is that far above and beyond what can be expected from a sundae, just that it brings together the right ingredients in the right way to make a better chocolate sundae than anything we’ve had in a while. It’s nothing revolutionary, but it does its job well and hits the spot on a hot day.

The Chocolate Brownie Sundae is $18.19 with the Maleficent bowl.

The Maleficent bowl is available with standard sundaes for $16.69.

It’s shaped like a Mickey ear hat, with Maleficent’s horns on the ears and green eye slits on the “hat.”

“Disneyland Resort” is in green, between flames, on the back.

At first blush, this thing is odd. It’s tart yet sweet, watery yet creamy, a contradiction of flavors and textures all the way through.

The pumpkin chai cider is very tart, bordering on sour, and the ice cream that is floating on it is the exact opposite, being sweet and soft and creamy.

The two don’t ever really go together, but they can peacefully coexist in the same glass anyhow.

The first sip was jarring and we immediately disliked it but sip after sip, we kept coming back trying to figure out what this really is. It’s not for everyone, and even though we finished the glass, we still aren’t sure whether we enjoyed it or not. It’s an enigma.

The cider was light and refreshing while the apple sorbet was hard as a rock. It’s probably better when it’s hotter and can melt into it quicker, but the melted results made it all like an apple slush.

The caramel reminds us of the caramel on candied green apples, with a very sticky consistency, but overall, it’s good. We loved the flavors here, and it’s a great boozy treat.

WDWNT is Hiring a Senior WordPress EngineerApril 25, 2022
Train Track Sections Assembled as Walt Disney World Railroad Prepares to Return to the Magic KingdomSeptember 8, 2022
Feathered Friends in Flight Will Close for Refurbishment this September in Animal KingdomAugust 8, 2022