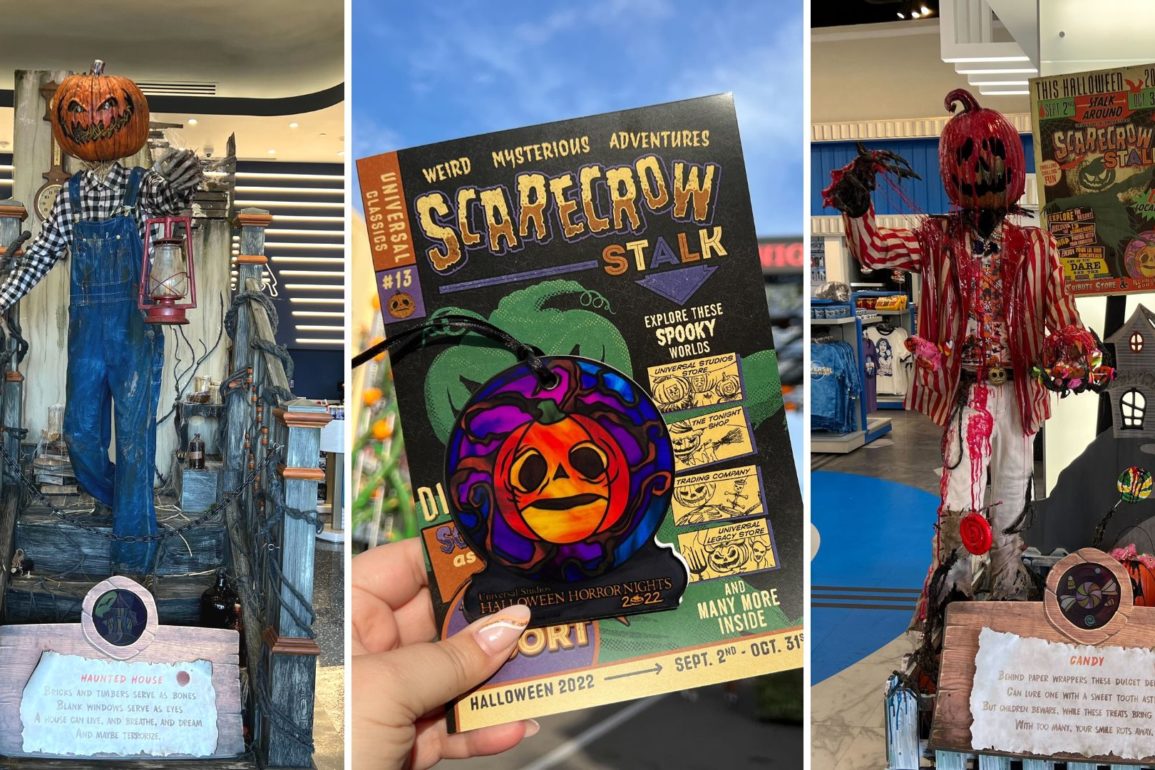 Halloween Horror Nights 31 has begun! But if you’re looking for something fun to do during the day this season at Universal Orlando Resort, check out the Scarecrow Stalk.

This scavenger hunt sends guests all around Universal Orlando Resort, including both theme parks, on the search for special themed scarecrows. The Scarecrow Stalk mapcomes with a Lil’ Boo suncatcher ornament for $10.

There are 13 scarecrows total on the Scarecrow Stalk. The retro map resembles a comic book.

There are even comic-like panels featuring each scarecrow.

Each location on the Scarecrow Stalk also has a suncatcher inspired by the respective scarecrow display. You can buy them all for $12 each.

Like much of the Halloween celebrations this year, the scarecrows have a classic theme, in honor of the 31st year of Halloween Horror Nights. They all have jack-o’-lantern heads, and this display features an old hearse.

There are actually multiple scarecrows on this display.

This display is called Trick or Treat. The sign reads:

On Halloween night we don a disguise
and spread mischief both near and far
But children, beware; too much time in a mask
can make you forget who you are.

The stained glass-inspired jack-o’-lantern bucket picture is the same one featured on the available suncatcher ornament.

The ornaments all say “Halloween Horror Nights 2022” at the bottom.

The scarecrow display in Five & Dime is candy-inspired.

The scarecrow has red, melted candy reminiscent of blood all over it.

The ornament features a piece of striped candy.

In MIB Gear, the scarecrow looks like a giant spider.

A jack-o’-lantern face is on the spider’s abdomen.

Small spiders crawl over jack-o’-lanterns at the bottom of the display.

The matching ornament of course features a spider at the center of a web.

Custom Gear has a scarecrow with ravens perched on it.

Gravestones sit on the base.

There’s a vampire-inspired scarecrow at Rosie’s.

The scarecrow is emerging from a coffin and wears a red suit and black cape.

Bates hang from vines around the coffin.

The ornament features a bat against a red background.

A witchy scarecrow is in The Tonight Shop.

It wears a black witch’s hat and tattered robe.

A cauldron is full of ingredients at the witch’s feet.

A black candle sits in a pumpkin.

Moving on to CityWalk, there’s a haunted house scarecrow display in the Universal Studio Store.

The scarecrow resembles a farmer, wearing a plaid shirt and denim overalls.

He steps down some spooky steps covered in straw, bottles, and vines.

The scarecrow holds a lantern in front of him.

A clock and black-and-white portrait hang on the wall behind the scarecrow.

There’s a stack of books and candles at the top of the stairs.

The ornament features a haunted house with a bat and full moon behind it.

In the Universal Legacy Store is a devili-inspired scarecrow.

The jack-o’-lantern has horns growing next to its stem.

Red devil masks hang on poles around the scarecrow.

The ornament has a devil silhouette against orange fire.

This display in Universal’s Islands of Adventure is inspired by spooky, scary skeletons.

Several small skeletons and skulls atop posts are part of the display.

There’s a gravestone for Herbie.

The main skeleton scarecrow has a jack-o’-lantern head painted to look like a skull.

A small top hat is on its head.

The ornament of course features a white skull.

In the Marvel Alterniverse Store is a grisly grim reaper scarecrow.

It wears a black cloak, and a terrifying skull looks through the broken white pumpkin head.

It’s holding a scythe with a green eye in the handle.

Bones are on the ground around it.

The ornament features a reaper with a less terrifying skull-like face.

These jack-o’-lanterns are draped with white sheets.

Triangular eyes have been cut out of the sheets.

Some of the ghosts wear small top hats with fall leave accessories.

A ghostly jack-o’-lantern is stuck in a permanent screen on the ground.

The ornament features a classic white ghost against a blue and purple background.

The Dinostore has a cat-inspired scarecrow display.

Black cat flats like those from All Hallows Eve Boutique are around the display.

The main scarecrow wears a tarp robe with a cat face on the center. The jack-o’-lantern head has a cat face and ears made from autumn leaves.

The ornament features a black cat standing on the crescent moon.

In Treasures of Poseidon is a small graveyard.

A cluster of gravestones covered in moss are on the base.

The center gravestone, which makes up the body of the scarecrow, is for “Jackolantern.”

The scarecrow’s arms resemble dead vines, and its jack-o’-lantern head is white and carved like a skull.

The ornament features a “RIP” gravestone and an orange jack-o’-lantern.

Which scarecrow from the Scarecrow Stalk is your favorite? Let us know in the comments!

Next
RUMOR: EPCOT’s Play Pavilion Will Not Be Mentioned at D23 Expo, Attraction Either Cancelled or Scaled Back