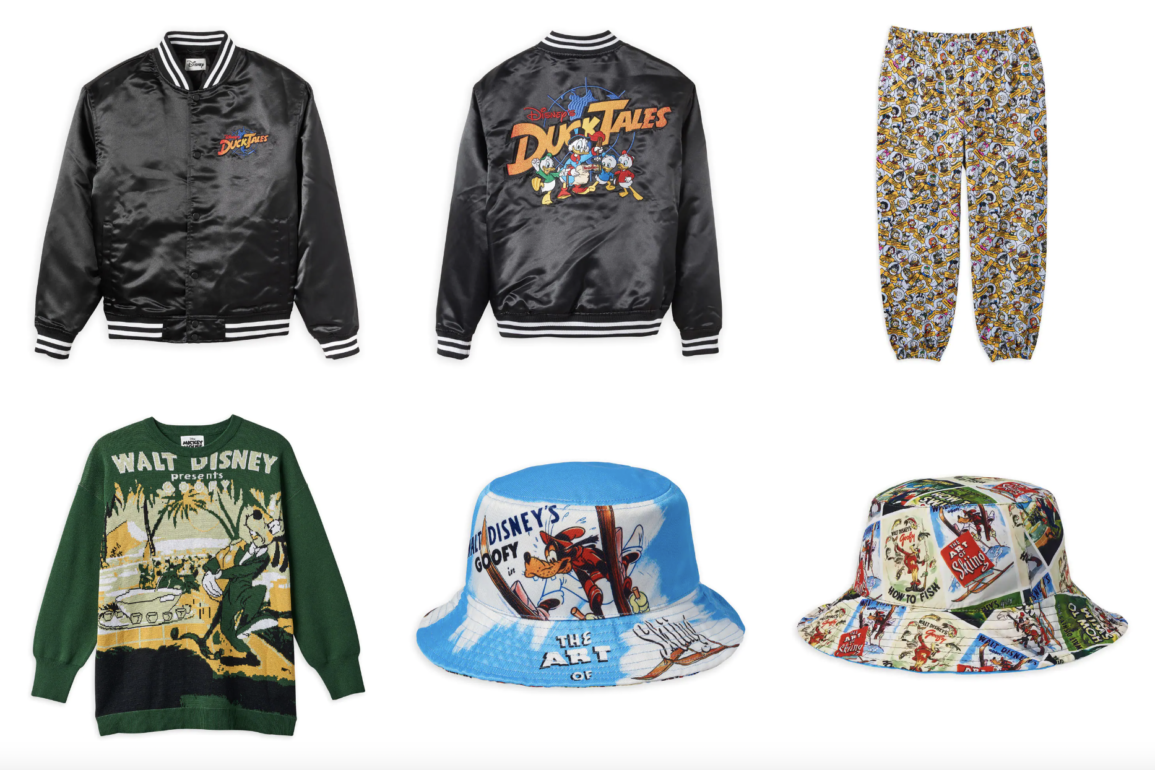 Disney has released a sneak peek of the D23 Expo 2022 merchandise that will be available next weekend!

The Goofy Dippy Dawg plush is inspired by his original appearances in Disney shorts. Also stay on the lookout for the D23 Expo Limited Edition Joe Ledbetter Vinyl Collection, which brings back Mickey and Friends in their original, Inkblot animated style.

The Tron Loungefly mini backpack celebrates 40 years of the classic film. it is faux leather and glow-in-the-dark, equipped with a light-up LED disk pocket and black metal hardware throughout. Pair the backpack with some new showstopper flare inspired by Flynn’s Arcade: The Tron Pin and Patch set.

Decorate in the Hellenistic style with the limited edition Disney Hercules Muses Figure from the “Hercules” 25th anniversary collection. Dress to dazzle with the “Just One Bite” canvas Snow White tote in honor of this princess’s 85th anniversary.

If you like princesses, new collector dolls showcase Jasmine, Merida, and Giselle in. The Color Me Courtney Tiana Headband set includes a sunny orange print and pearl-studded sateen scrunch.

A new limited edition anniversary pin collection features concept art set behind characters who pop out of the background. This year marks the anniversary of several animated films.

When it comes to Disney Parks-inspired merch, there will be a Mad Tea Party purse, Dumbo the Flying Elephant planter, and the Global Ear Headbands. These ears represent some of the Disney Parks around the world.

Feel the magic of the Disneyland Shanghai and Hong Kong Resorts when you put on a pair of these ears! The Castle Collection will include a jacket of classic denim with an all-over print, plus limited edition pins.

The World of Wakanda collection showcases a range of textiles, apparel, accessories, and more inspired by Black Panther and the Kingdom of Wakanda. Spider-Man fans can also make a bold statement sporting the Limited-Edition Spider-Man Color Block Tee. There will also be the X-Men ‘90s animation line, including the X-Men Fashion Tee with an all-over VHS print and the embroidered Xavier Baseball Cap. Part of this collection, in collaboration with Hasbro, also includes a first-to-market opportunity to grab the Marvel Legends Series X-Men Mystique ‘90s Animated Series figure.

Ashley Eckstein’s “Guided by the Light” collection includes a range of fashion-forward ‘fits styled with light-reflective treatment and accessories to match. The Star Wars Water Bottle is particularly unique, centered around a built-in crystal to light up your liquids and reflective exterior ink to make you shine.

Die-hard fans will like the limited edition Obi-Wan Kenobi Legacy Lightsaber Set, including three different hilts modeled after those used by Obi-Wan, along with a wooden box that plays sound from Obi-Wan’s first appearance in “Star Wars: A New Hope” when opened. All three Lightsaber collectibles illuminate blue when connected to a Legacy Lightsaber Blade or to Savi’s Workshop blade.

LucasFilm fans will also love this first-ever Willow Reaction Figure in collaboration with Super7. Featuring Princess Elora Danan, this figure will only be available through Disney Parks and shopDisney. More exciting Willow products will be available later this fall.

Ahead of the re-release of “Avatar” and release of its sequel, a new “Avatar” collection is coming to D23 Expo. This collection includes a cotton sweatsuit splattered in tie-dye and made of recycled polyester. The “Avatar” pin accessory is rich with detailing, showcasing a picturesque landscape of Pandora. The “Avatar” resembles a banshee, styled with an intricate striped pattern and shimmering wings.