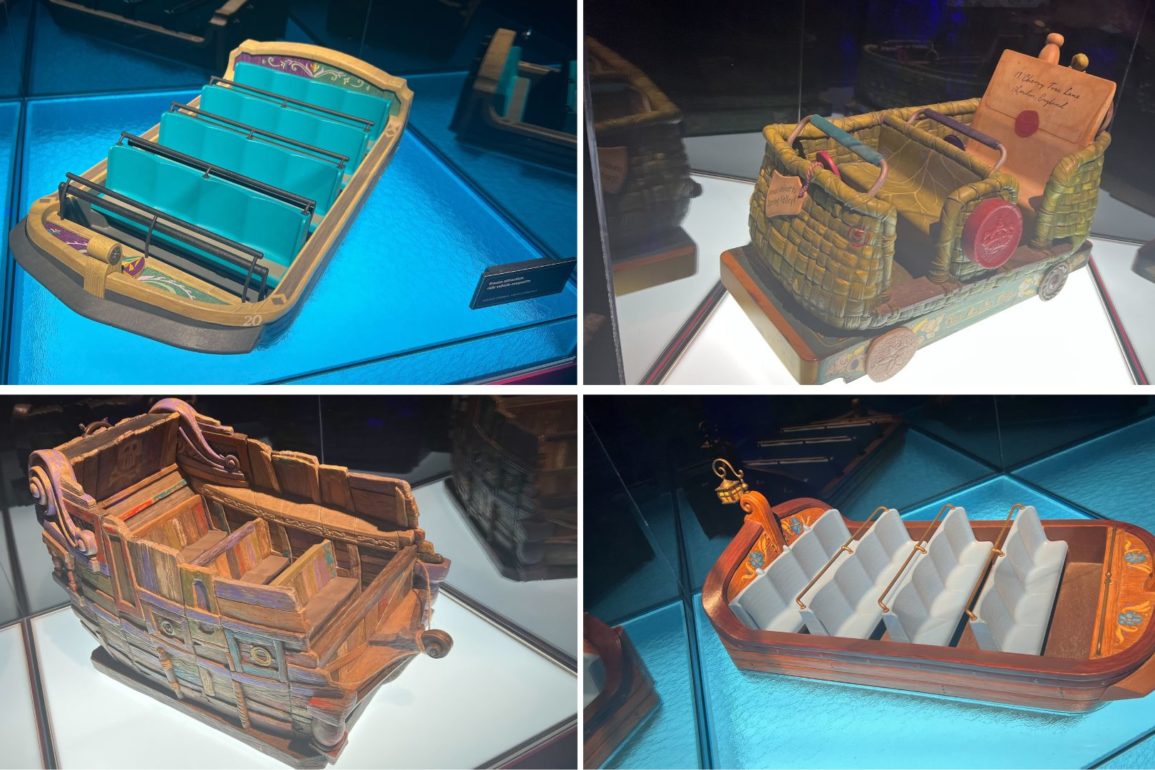 While no attraction name has been announced yet, we do know that the “Tangled” attraction will be a boat ride themed to the film. Guests will board gondolas for a romantic boat tour of Rapunzel’s “best day ever” as she journeys with Flynn to the lantern festival. Countless flickering lanterns illuminate the attraction’s climactic scene, as can be seen in this poster, while Rapunzel and Flynn sing an iconic song from the film, building to an unforgettable finale.

The flat-bottomed boats seem to be similar to those in use on attractions like Pirates of the Caribbean and “it’s a small world” but with the addition of rounded seats to conform to each of four guests per row.

The back of the boat features a lantern hung from a hook.

The Frozen area of the expansion will be set between the first and second films, when Queen Elsa has embraced her magical power to control snow and ice. She has since opened the castle gates so that guests can freely visit the Kingdom.

Guests will board boats and experience the sisters’ heartfelt journey while enjoying iconic songs from the film and encountering surprising thrills. This attraction vehicle appears to be the same type of boat seen in the Tangled attraction above, though with different decoration.

The Peter Pan area of the expansion will be home to a massive E-Ticket experience as well as a Pixie Hollow-themed attraction. This poster shows The Lost Boys as guests flying aboard a miniature pirate ship, sailing off to the peaks of Neverland’s mountains, which will be built within the land.

The attraction vehicle itself is situated similarly to the above boats, though with tiered seating and higher side walls that feature opening doors. The back of the vehicles feature a painted Jolly Roger and the whole aesthetic seems like ship painted by the Lost Boys themselves.

Guests board boats and follow the Lost Boys down a river. When Tinker Bell sprinkles the boats with pixie dust, Guests find themselves flying through Never Land on an unprecedented adventure that features iconic music and dynamic 3D imagery of the characters from the film.

In this poster for the attraction, we see Guests have been shrunken to Pixie-size to in the oversized world of Pixie Hollow where Tinker Bell and her fairy friends live and work.

The attraction vehicle is a woven basket that has been converted into a ride vehicle with found pieces making up the embellishments. Leaves become seats, buttons and shells for wheels, candies and string for decorations.

The back seat is made from a letter addressed to 19 Cherry Tree Lane, London, England. This is likely a reference to the home of the Banks family from “Mary Poppins,” though they live at number 17. It is unclear if this is a direct tie-in to the property, though it is likely that it is just a fun Easter Egg.

The front of the basket features a tag, asking for it to be delivered to Spring Valley, the Springtime area of Pixie Hollow which is divided up into regions representing each of the four seasons, as well as Pixie Dust Tree. The other three realms are Winter Woods, Autumn Forest and Summer Glade.

The back of the basket attraction vehicle is stuffed with other various odds and ends found by the Fairies.

Take a look at some of the other news that has dropped at D23 Expo: