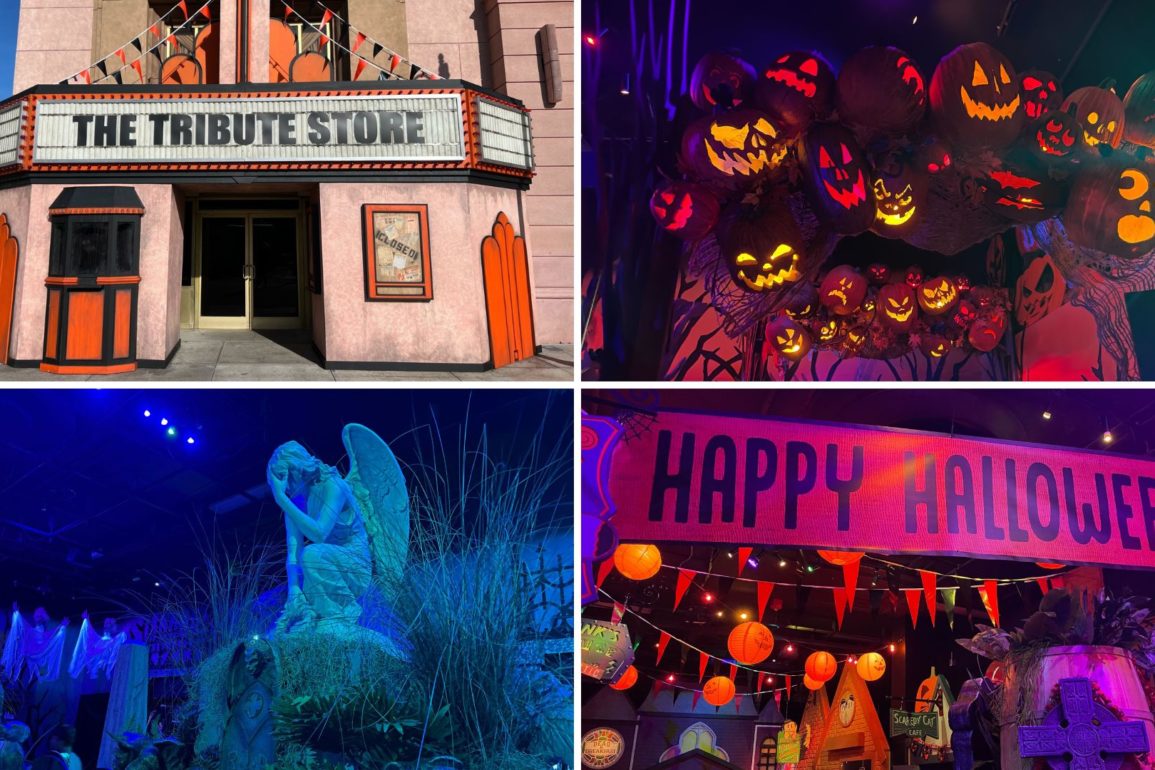 The store, like its recent predecessors, has four themed rooms to explore.

The Tribute Store, being paired with the Sweet Revenge scare zone, received an elaborate backstory this year. It started with a series of newspaper clippings in the summer Tribute Store that told a tragic tale.

The clippings come from multiple years, each telling a different chapter from the Tribute Theater’s dark past. In 1939, the owners mysteriously disappeared, leaving an office “inexplicably filled with candy.” The theater transferred to the owners’ son.

Above, we can see that the theater’s candy may have poisoned some patrons back in 1942. The suspects were named as a 27-year-old owner and his girlfriend, likely the same man who inherited the theater after his parents “mysteriously disappeared.”

After the summer Tribute Store closed, the clippings were added outside on the theater’s old poster frame.

The Tribute Theater (that housed the summer theme of classic Universal movies) was “cursed” and eventually acquired by the mayor for a mysterious “Halloween experience” akin to a dark ride. The “ride” is not functioning, but guests will shop amidst the eerie experiences within.

The façade is the same theater façade used for the summer Tribute Store, but it has been updated with Halloween decorations.

A small black and orange ticket booth is now on one side of the entrance. A “Dare to Enter” banner hangs above the entrance.

The pink and purple trim of the poster frame and marquee have been replaced. The new trim is orange and black. The marquee still reads “The Tribute Store.”

Halloween images have been added to the sides of the marquee.

Black and orange banners hang from the tower above. Whether on purpose or just from sitting outside for several months, the façade looks dirtier and dingier than it once did.

The entryway (which held a ticket booth over the summer) now has classic Halloween decorations and a warning to keep hands and feet inside the ride at all times.

There’s a podium for controlling the ride.

It has a reminder to get a birthday card for Greg.

And a user manual for the ride system, including a picture of the Doom Buggey-shaped ride vehicles.

There’s a box on the wall nearby with switches.

Arrows in this short hallway point to the themed rooms.

The door at the end of the hallway is for vehicle return.

A dark ride “track” (it’s just a sticker) runs along the ground through the store.

It leads through this giant cat’s mouth.

The first room is full of jack-o’-lanterns, some hanging from bare trees.

There are spinning crows on the ceiling that cast shadows on the walls.

Lil Boo is in a little bit of trouble.

This room is Hollow Hills Cemetery.

There are angel statues, wrought iron fences, and obelisks, all lit with blue light.

Bats hang from the ceiling.

Ghostly heads pop out from some of the graves.

The hallway resembles the interior of a mausoleum, with guest photos and epithets.

Guests then exit the cemetery through a gate.

The next room is the “cauldron cottage.”

It’s certainly the season of the witch in here.

There are bookshelves full of animal bones and books.

A candy cart is next to the oven.

A huge cauldron sits in the center of the room, surrounded by glass jars full of freaky ingredients.

The moon shines through a circular barred window.

This window looks out into a dark forest.

Earl the Squirrel is hidden in this room. Can you spot him?

The images on these stained glass windows move.

You might also see the witch’s shadow in this corner.

This room is part of the Halloween Festival happening on the New York streets outside, where Major Sweets has intentionally poisoned the chocolates given to the children, who are now on murderous rampages through the streets.

This room is lined with fake shop façades.

The shops double as check-out counters.

You might recognize the façade at the very end. It’s for a “Dead & Breakfast” and is inspired by last year’s Halloween Horror Nights Tribute Store.

This building façade is for Frank’s House of Plastic.

Two Frankenstein’s Monster Mold-A-Rama machines are in front of the façade. With this one, guests can make an orange monster head.

This one lets guests make a full-body figure.

Unfortunately, “Frankenstein” is spelled wrong on both machines.

A “fearwell” banner hangs above the exit.

The exit hallway advertises the the dark ride’s on-ride photo and Eerie Emporium.

There are also posters for other Halloween Horror Nights offerings, like the Scarecrow Stalk and the Dead Coconut Club, which will open soon at CityWalk.

A collectible medallion machine is at the exit.

The designs feature Lil Boo, Casper the ghost, Dracula, and the Pumpkin Lord.

Then there’s the Eerie Emporium, full of tacky theme park merchandise that is unfortunately not actually for sale.

Did you know a peacock is hidden in every Tribute Store?

The peacock can be found on a shelf at the Eerie Emporium.

As you walk out, don’t forget one last photo op!

The electric chair from the now-shuttered Classic Monsters Café lives on outside the exit.

Watch a full walkthrough video below.